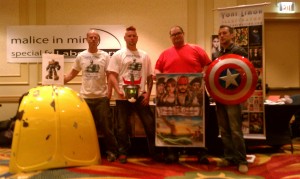 Malice in Mind recently attended the Geek Media Expo volume 4. This special-effects company is located in Nashville, TN and has a wide variety of specialties. Co-Founder and CEO Rick Prince sat down with me to discuss contributing to the zombie apocalypse, building the Transformer Prowl and a Kickstarter-funded project to create an actual, transforming, 15-foot tall Autobot Bumblebee!

Please define Malice in Mind. What kind of services does it offer?
– “We do custom characters and creation across the board, from business to business. Current in-house products, like Prowl, are from Transformers Universe. A giant, 7-foot carbon-fiber Autobot, for the Transformers Universe MMO game, all the way down to a personal project, like Big Daddy, which was a Halloween costume prop for a 9-year-old girl. The Big Daddy part was the accessory piece, to the Little Sister, who she was going as. She needed her Big Daddy. Luckily, my daughter gets the inside track, but I still put it on a small budget. It’s a reachable level, before you get to the crazy part, that our company does. Even though Prowl is a super, tall, expensive thing, there are fan-reachable things. We have prosthetics available for purchase in retail outlets and online.”

Is everything created by hand, at Malice in Mind?
– “It depends on the project. Prowl has some machinable parts in him. By and large, everything is almost exclusively handmade, in-house. That’s what at once sets us apart and binds us to our clients. It lets them know they can have another outlet — another tool — to facilitate their company’s drive, or push. We can help them brand themselves. Transformers Universe is an online, non-tangible thing. Prowl, you can touch. You can get your picture made with it. The awe that I used to be when I was a little kid, looking at Transformers… we’ve carried that passion over to what we do for a living. That’s one of the biggest compliments I get from people.”

Are you working on any future projects for Hasbro or The Transformers?”
– “There are things in development for them. Next year is a significant year for the Transformers brand. There are a lot of things going across the board. There are historic G1 characters that have transcended into new storylines, new arcs, from the comics I have followed, from the toys I still collect. Getting to see the new ones, that we’re working on, come out in the future, will be bigger and more impressive.” 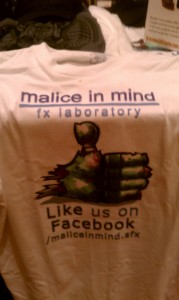 Can you tell me a little about your Bumblebee Transformer project?
– “Bumblebee is one of those great stories, in the works. It’s a diamond in the rough. The reason I went to Botcon, was to promote Bumblebee, and see what would happen. I rolled the dice. I went to the convention with an idea. I wanted a little wow-factor, so I found a head-rest mount for your car, and mounted that to my arm with an iPad. I was a walking billboard, with a video display. I wanted to get attention, to get someone to look at me, so I could talk to them. What they saw was a promotional ad for a 1-to-1 scale Bumblebee. There’s one in the United States that’s been done in the Generation-1 style, but the arrangement of the robot-mode transformation orients things in a way that only can be done in animation.”

“Somebody has done one, but it looks a little bit awkward. He’s a little leggy. It just looks a little odd. We had thought of doing the same thing a while back, but ours is a different version of the transformation, based on a new toy model I saw. It just orients the position a bit different. The back of the vehicle becomes the chest, and that allows for a more ergonomic and user-friendly transformation. Taking a real vehicle and disassembling it, and you build a 1-to-1 scale transforming robot. We polled the fans online. We asked people who they would like to see. The answer was Bumblebee. The old-school VW. We started a Kickstarter campaign. We raised the funding to acquire a Volkswagon to start this project. That idea is a fan-based, homegrown idea: By the fans, for the fans. We love it. It is a non-money-making machine for us. We donate all of the time and energy and labor into buying the car, getting the car, disassembling the car. We are rolling it back into cycles, and we’re going to launch that on Kickstarter, through our Malice in Mind Facebook page. There’s a fan site where we show all of the maquettes that I’ve done, all the scale models, to show how these parts will be arranged.”

“This is a real thing that’s going to stand 15-feet tall and will be animatronic. We will animate him, to where he will interact with people. If you hook up a microphone, he could be MC’d by the original voice of Bumblebee (Dan Gilvezan). Here, at GMX, we’ve got the hood, taken from the original car, that we found. He’s been sitting in a field, for 20 years. It was the only car left, out of 100 Volkswagons. We’ve got pictures of that, you can see it online. We salvaged the core of it and just used the body panels. We used the recycling money on the steel frame, to section him apart. The next step is to continue work on the framing. Bumblebee is going to need a body, and you can see that online.” 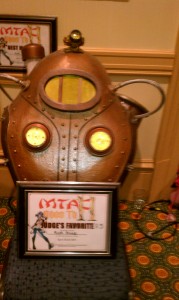 What’s the estimated price-range you’re looking to raise?
– “It depends on what we want. We had talked about getting him standing up, safely and being mobile. We have estimated the full bill, to get him upright around $10,000, just in material and labor. We have already acquired the car, which was originally included in that number. It’s been less than we anticipated. It’s been a little bit of a blessing. We don’t have a set limit. We’re going to go in small runs: A $750 Point A to Point B, which will be time-lapsed, chronicled online.”

Do you have an idea when you will you be presenting completed parts, at different conventions?
– “That’s when I get to rely on people like you and fans at the convention. Here at the convention, we’ve been accepting donations for Bumblebee. We have raffles where we give away some of our merchandise: Silicone prosthetics and masks people can wear. Our art director has been giving away artwork tied to the donation… up to the $750 silicone mask that we gave away to an 8-year-old kid at MTAC earlier this year. We hope to be done by next year, next GMX. That would be great.” 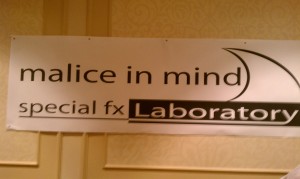 I hear you specialize in Zombies?
– “Zombies are something that we love. We did zombies all Halloween this year. Earlier this year, we had a contract for a big event that involved us talking to some people who work for The Walking Dead. My history, with zombies, goes through Tom Savini and Greg Nicotero. I took a tour of the Tom Savini school (The Douglas Education Center in Pittsburgh). I talked to the instructors about teaching and learning. Zombies and actors have not been a big focus of mine. I’ve made sculptural elements and animatronic robots for Disney and Universal, I didn’t really deal with too many people. The past couple of years, there’s been a big changeover. I’ve hired a makeup artist, who I’ve learned from. I teach him mold-making, and I learn some makeup. We recently hired a beauty makeup artist as well, because all of us are clueless on that. We’re trying to round out our skill set, and zombies was a big part of it this year.”

Besides Transformers, what other projects have you been working on?
– “We worked with the Nashville Zombie Walk recently. The people of GMX are friends of ours. We try to help with their conventions, come and make a big stink, raise attention. At the zombie walk, we had a whole crew. We did a couple of walk-ins for free. We’re throwing people in makeup just to fill the crowd out. The crowd was 6,000 deep! We were giving a demonstration at GMX onsite, demonstrating makeup techniques. I invite people to sit, right up next to us. To ask questions, after everything is set. Talk to the actor and get feedback.”

What future conventions will Malice in Mind attend?
– “Trips would include international tours, to do all the major conventions around the world, Transformers in tow. We’re only going bigger, and more menacing in our approach.”