Rob Paulsen was a featured guest at the Geek Media Expo Vol. 4 recently. He may not be quickly recognizable in person, but as soon as he speaks, you’ll instantly know his voice. As a voice actor, Paulsen has voiced many roles on animated TV shows, appearing on more than 2,000 half-hour episodes. Starting in the early 1908s, he worked on shows such as: The Transformers, GI Joe: A Real American Hero, Challenge of the GoBots, Snorks and Teenage Mutant Ninja Turtles. He was ultimately recognized for his supreme skills as the character Pinky, of Pinky and the Brain, and he was awarded the Daytime Emmy for Outstanding Performer in an Animated Program. Paulsen continues to do voice-over work to this day, and recently joined the cast of the revamped series, Teenage Mutant Ninja Turtles, but this time, voicing a different character (first Raphael, now Donatello).

Rob Paulsen spoke at multiple panels during GMX, as well as a conference-style press conference. He was joined by fellow voice actor Billy West (Futurama, Justice League, Pinky and the Brain) in a few of his panels as well. I have highlighted some of the discussions that were held.

When did you know you wanted to become a performer?
– “Very young. I grew up in Michigan. I really wanted to become a hockey player. Fortunately, some kid from Winnepeg beat the living daylights out of me, when I was probably 17 years old, but it was clear to me I had no business making money as a hockey player. My second desperate passion, when I was young, was performing: Primarily a singer. My Mom and Dad were both performers in community theater in Detroit. Me and my siblings were all performers. I knew from a very early age I wanted to be a performer — not necessarily a voice performer. I love cartoons… I knew who Mel Blanc, June Foray, Daws Butler and Don Messick were. I was a total geek about that stuff. When I moved to California in 1978, my agency signed me as an on-camera talent. I did half a dozen movies and a bunch of TV shows, lots of commercials on camera… always working on voice stuff. I had the opportunity to start reading for cartoons, in the mid ’80s. One thing led to another, and I let the on-camera stuff go, realizing I had a face for voice-overs. And I was not limited, by being an average-looking White guy. I’m doing Turtles again, now. Fortunately, silver goes great with purple, so now I can be Donatello.” 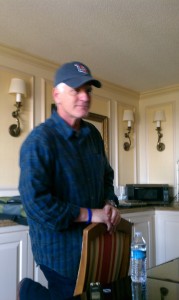 What’s it like to work on the remake of a project, which you also worked on?
– “It’s an incredible gift, to get another bite of that turtle apple. You won’t see this very much. It’s kind of an anomaly. I was very fortunate to get another crack at this, after four, five auditions for Donatello. It’s kind of surreal. I’m working with two of my close friends, whom I’ve known for 20 to 30 years, and for the first few episodes, (Director) Andrea Romano would often speak to us, as our character, and as soon as she’d say, “Hey, Raphael,” it’s like a Pavlovian response, but I realize Sean Astin is now Raphael. It took me a while to get used to that. The people who are making the show are huge fans of the original show. The people who are making this iconic, new, reboot, are people who grew up, loving the one I was on, in the beginning. They get how important the characters are to people. They get the mythology. They get the ethos. I get a lot of tweets from people who have said, “I was prepared to hate the show, and I love it.” I get that. Nostalgia is a powerful emotion. By and large, people really love the new show, and I’m very proud of it.”

As an actor, do you have more creative freedom working on the new Turtles show, or less, because the characters are already established?
– “I don’t think I have any less creative freedom. There were certain tweaks that were wanted. Donatello is still the brains of the bunch and not the best fighter. Leo and Raph are the premiere fighters. My version of Donatello is a sweet, lovable nerd with a bit of an edge… My sweet, lovable nerd has a hair trigger. Because the audience knows the whole story of the turtles now, the scripts are a little deeper, are more fleshed out, now. Not because the scripts in the original show weren’t, but it was more of a kid-friendly show, that was developed in the ’80s and ’90s. That show is more geared toward 6 to 11 year olds. The proof is in the pudding. I can’t tell you how many birthday parties I called. And I loved doing it. In this iteration, a lot of people like the darkness of the comic books. The action sequences are a lot more intense because the technology is there, to make them such. That’s not to diss the original show — because I’ll always be proud of that. It’s not better. It’s different.” 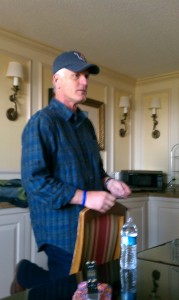 As a child of the ’80s, I grew up with Turtles, GI Joe and Transformers. What kind of stories do you have working with Peter Cullen, Frank Welker, Chris Latta?
– “Well, a week ago today, I was on the golf course with Frank. Frank is one of my dearest friends. He found our house for us. We live five minutes from him. And right across the street from Frank, lives Nolan North, who is Drake on Uncharted, he’s worked on Portal… he’s Mr. Video Game. Nolan, Frank and I were playing golf just this past weekend. My stories of Frank… I’ve got volumes of them, because I’ve known him for 25 years. Peter Cullen, a wonderful guy. I had dinner, two weeks ago, with Chris Latta’s daughter. I worked with Chris — he was Starscream and Cobra Commander — and talk about a force of nature. He was a bigger-than-life human. You can Youtube his stand-up comedy. He’s a very intense guy. He died way too soon, but what a pleasure it is to meet his daughter, Abby. And she’s a budding voice actress. It’s really cool, that there’s this connection to the old shows, on which I started. My first two cartoons were Transformers and GI Joe. I was a semi-regular… I was Snow-Job and Tripwire. That’s where I got my start. Don Jurwich, the Producer of those shows, from Sunbow, gave me my first crack, and I’ll always be very indebted to Don. Wish I could go through chapter and verse, but a lot of these guys have been on my podcast, that I do every week. It is free. It’s called Talkin’ Toons. I also have an App now. It’s free. If you go to the App Store, you can download the Rob Paulsen App, which has all my podcasts, and ways to find out my personal appearances, photographs for charity, how to contact me. All those things. And the Android version is in the works.”

When did you realize you had made it as a voice-over actor?
– “The first show where I did something that was right in my wheelhouse with music, acting, improv and comedy was Animaniacs. I am lucky enough to work on great shows. To do a show with people on both sides of the glass who are, literally, at the top of their game… I mean, Steven Spielberg. End of story. Mr. Spielberg hired me. When you have that kind of guy in your corner, you can’t go wrong. Everybody won Emmys. Everybody was the best. I think we could do a live Animaniacs show, touring around the country, sort of An Evening with the Animaniacs, doing music and questions (from the audience), and I bet we could sell out 1,500-seat theaters around the country, because it’s an enormous part of people’s childhood, but it’s great stuff. And it doesn’t get old. And we’re still young enough to do it. That was the one where I thought all the stars aligned for me.”