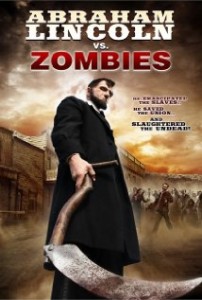 What’s more Presidential than tuning out of all the Election Day results and watching a movie about Abraham Lincoln… killing zombies? Uphold your God-given right, and vote for this movie… in your DVD player!

Vampires are so… passe. The “true,” untold story of our 16th President of the United States of America began when he was a young lad. His father committed suicide instead of destroying his wife, who had turned into an undead minion. That night, young Abe unknowingly began his crusade to rid the earth of all zombies. In this vision, zombies seem to fall asleep… while standing. And must be destroyed! This Lincoln doesn’t carry an axe, but carries a sickle to behead the zed. And if you carry a gun in this movie, don’t worry about pointing the gun in the actual direction of your target… there’s lots of no-aim (and gun waving) headshots impractically going on here.

I really didn’t like the accent chosen by Bill Oberst Jr. who is the actor portraying Abraham Lincoln. It was too folksy, too cheesy and had an incredibly fake, hometown twang. And speaking of fake, there were way too many fake mustaches and fake beards (with a fake facial wart) on the costumes of everyone involved. I did like the flashy outfits Mary Todd and her “girls” wore, but that’s probably the highlight of the entire movie (and not saying too much about me in the process). There were a a few audio-dubbing difficulties, where the sound faded out, but that may have been the fault of the physical DVD I was watching.

This Lincoln is obviously a head (and shoulders) above all others in the polls. Too bad he couldn’t use that leverage by gaining a majority of the votes for DTV Movie of the Year. And Spoiler Alert: Lincoln escapes on a zipline! How modern of him!

Strength: It all started with a pretty good idea…
Weakness: That idea, though, was never fully formulated…
WTF Moment: A young Teddy Roosevelt is taken in by Mary Todd when he is separated by his family.

Notable Quotes:
– “The slightest noise — including gunfire — will awaken them from their standing slumber.”
– “As you go, walk softly and carry this big stick.”
– “Zombies? That sounds like slave talk.”
– “Emancipate THIS!”