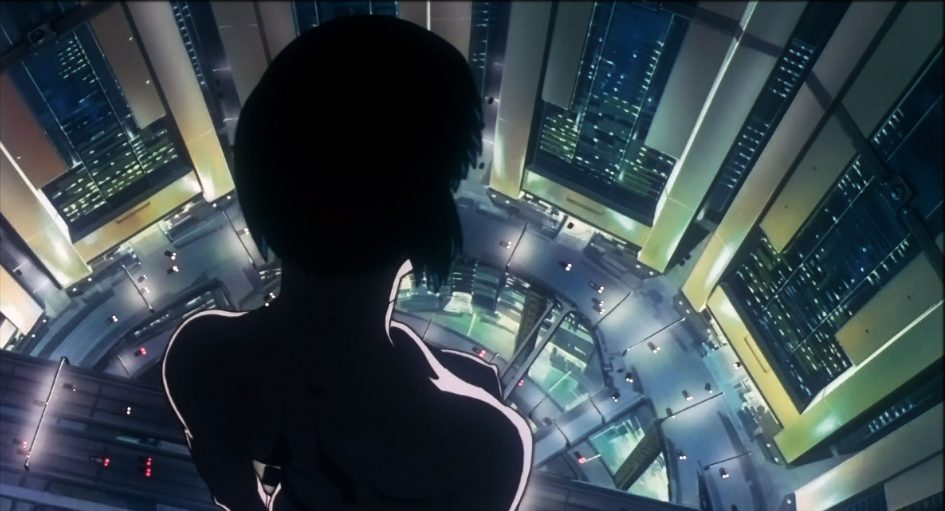 Ghost in the Shell is good. You can sleep soundly now. And yes, assuming it makes money, it will be the first of what may be many. Oh, and that whitewashing flap? Stow it. In fact, the solution is so simple and appropriate that you will (hopefully) be embarrassed to have even fretted about it. Or at least, you should be.

Before we roof-dive into the spoiler-prone territory of explaining why the Internet’s stupidest “controversy” of the cinematic year is the recent obsession with alleged “whitewashing,” let’s talk source material and the loyalty to it shown by Ghost in the Shell.

We have a film that serves both as an origin story and a hybrid of a few iconic elements of the original anime movie and TV series. Some major elements are from one, and some from the other, but they are combined in a very coherent and direct story about “the Major” — a cybernetic lady –badass who is haunted by her past life. There are many nearly shot-for-shot sequences that are quite well-produced, the score hearkens back to what we recall from the earlier iterations, and the action works very well among the legacy of the franchise. Really, anything “left out” or altered is much more because of the effort to ground this tale at least somewhat in the real world, not some gross oversight or betrayal of childhood.

Coming to this movie and expecting the exact storyline of the first film, or of Stand Alone Complex, or any specific arc of the shows or games is foolish, and frankly outright immature and dumb. That entitlement is actually a very sad trend that we can only hope to breed out of the culture, and it cannot happen soon enough. New stories are just that — new — and they are for the current storyteller to conjure. Sometimes those stories are lacking, and other times they are quite good. Ghost falls comfortably in the middle, without a hugely profound story to tell, until you realize that the film, itself, is a slap in the face to the very criticisms it has unfairly faced, pre-release, despite the cast being clearly chock-full-o-Asians.

The trendy Internet crybaby topic du jour lately has been to throw TumblrTweetaGram tantrums about supposed “whitewashing.” Otherwise noble and necessary in an examination of Hollywood’s practices and priorities, the unfortunate banners being waved by this crowd are entirely inappropriate: Iron Fist and Ghost in the Shell. Despite the characters in question being white already, or in Major’s case, being race-ambiguous, the must-have-a-crisis camp has seemingly chosen these two franchises as their Alamo. Ghost in the Shell brilliantly (and honestly a bit obviously) dispatches all of this. (Spoilers up next.)

Our story’s main gal is Major “Mira Killian.” Well in advance of the film’s release, this name floated around the ‘net, with nerd-rage-a-plenty in its wake. A few of us were wise enough to note that the initials “MK,” happened to be identical to those of one Motoko Kusanagi — the name we learn to be the true identity of the Major in the anime iterations of the franchise fairly early on. One might have suspected, with a fleeting five minutes of critical thought, this could not be a coincidence. Perhaps, just maybe, it might be that the “Mira” moniker was a thin alias assigned to the Major… as a meta whitewashing in-story.

And if you happened to have fathomed that, you’d be exactly right.

We learn that a young Asian girl, Motoko Kusanagi, was kidnapped and placed into the program to create these potential cyborg super-cops, and she is not alone. Her companion, Kuze, is also kidnapped, cyber-transplanted, and alias-whitewashed. We are led to believe that this was the fate of several others in their camp of runaways, as well.

Turns out, Kuze is “WOKE.” Like, hacktivist trying to make sure Major and others face reality woke. What unfolds is a tale of a greedy white man with unchecked power taking these Asian kids away from their lives, forcing them to live as products and tools of his own corporate aims, and changing their names to suit his agenda. In the end, there is triumph (albeit dark and gritty, in true cyberpunk style), and Major is able to reclaim and own her name.

Of course, there will still be many who are not happy with this notion, or for whom this meta tale will not compute. Too much complexity for the small minds at hand, perhaps. Not enough drama to power white Millennial kids who need the channel of the web to properly flow their tears, maybe. Indeed, there are still people asking, “But why Scarlett Johansson?!?!” To that mind-numbing question I have to ask… do you want this movie to make enough money to have more installments? Then we need the Sigourney Weaver of our time. A talented, sexy, badass chick who most people respect on many levels. She owns this particular genre and trope, and her casting made perfect sense. She plays it well. This was the right choice, end of discussion.

Look, there are plenty of instances of whitewashing, but we really need to learn when to identify what is and is not such. Hollywood being insensitive to more opportunities for Asian leads? Yes, that’s a problem. It is not, however, whitewashing. Someone choosing not to take an opportunity to convert a white or non-specific role into an Asian one? Also not whitewashing.

When someone releases the all-white remake of Boyz n the Hood, you’ll have some whitewashing. The failure to continue with Billy Dee Williams as Two-Face in the late ’80s/early ’90s Batman series of films? That’s a candidate for whitewashing complaints. There are many others. Let’s have those conversations — or fights — when needed. Let’s stop this foolish attempt to bundle things like Ghost in the Shell into all that.

It is simply not whitewashing, and it does an excellent job almost mocking the controversy.

When you see this movie, make note of the incredibly diverse nationalities and racial makeup along the way. Leave stupid arguments like Batou being Asian at the door (he is French, and his name means “boat” in its French spelling — oh, and he’s a burly, tall, blond guy). Enjoy the other French and Irish and Kurdish folks in the mix. Marvel at the sheer staggering volume of Asians on hand at all levels. If anything, the film lacks a healthy supply of black folks outside the African Federation characters, but then Japan isn’t exactly teeming with people sharing that descent, and that’s not due to some nefarious agenda.

So, calm down, Internet… cram your hyper-judgment ghost up your shell and have a good time with a very good flick.