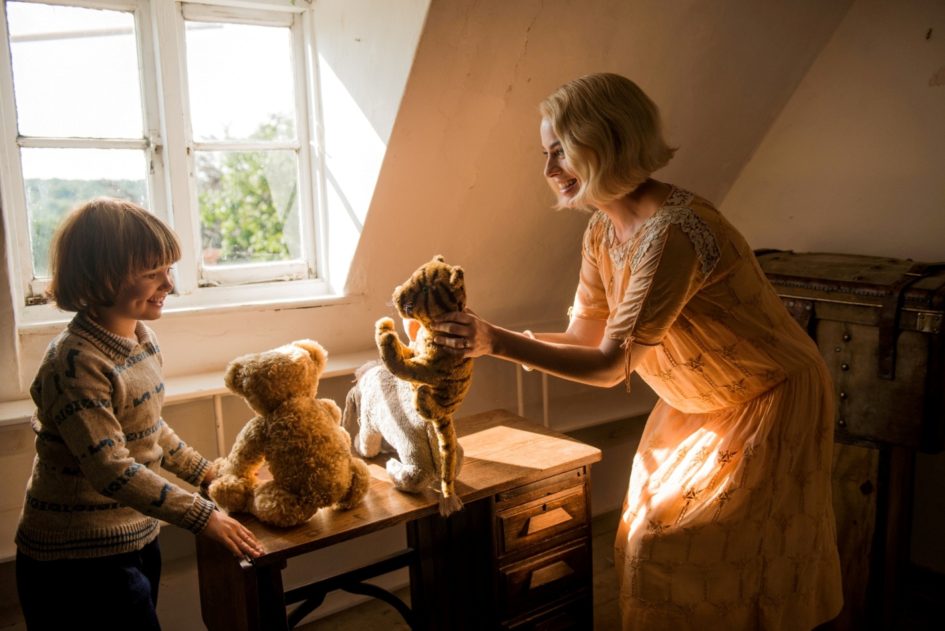 Per Matt
Growing up, I loved watching the Muppets and reading Winnie the Pooh stories. Throughout the years, popularity has waned for both of these once-proud properties and Walt Disney eventually purchased the rights to Tigger and company, even though the company never properly promoted the property. To this day, neither one has gotten the attention and publicity that both of them deserve. Hopefully, Goodbye Christopher Robin will help remedy that situation for A.A. Milne’s beloved children’s stories.

Portrayed on screen by Domhnall Gleeson, Alan Milne was a complicated fellow. Writer, poet, playwright, atheist and pacifist, Milne served his country during “The War to End All Wars” (and later WWII). Returning home, he suffered from PTSD and retired to a cottage on the edge of the Ashdown Forest in East Sussex, England. Grumpy, jumpy, suffering from writer’s block and stuck in a loveless marriage, his only bright spark was his child, Christopher Robbin (often referred as Billy Moon, his nickname). Inspired from his son’s imagination and his stuffed animals, Milne gained worldwide success from his stories based on Winnie the Pooh, Piglet, Eeyore, Kanga, Roo and Tigger, too.

These books were just what England needed as it recovered from WWI. Swept away with all of this fame was the loss of childhood by Christopher Robin, as the child spent most of his time with his nanny (portrayed by Kelly MacDonald), while his socialite mother (Margot Robbie) was off partying and his father went back to writing and producing more plays throughout England. But his children’s books overshadowed everything else. And Christopher soon despised them. Growing up was hard for the child.

“The day won’t be long when people will forget all about Winnie.”

As a big fan of biopics, I jumped at the chance to review this movie. The source material really spurred my imagination as a young child and I’d hoped this movie offered some behind-the-scenes access into the writer’s life that could make me enjoy his books even more. Unfortunately, Finding Neverland (the biopic I hold in highest regard), in tone, felt similar, but far superior to this movie. At times, Director Simon Curtis focuses on the evils of war, a troubled family, a loving nanny wrongly fired from the family she loved and a grown-up child despising his parents, along with the books that made him famous. There’s not a lot of sympathy to give to these darkly written characters and topics, but somehow the movie is still incredibly emotional, nonetheless. I broke down crying multiple times during the final act.

Distributed by Fox Searchlight Pictures, this is the type of story that Walt Disney Pictures would never have produced, despite its popularity as best-selling books, TV programming and being a never-ending merchandise-generating success. Had Disney done it first, surely there would have been a moral to the story and the characters would’ve been transformed into pillars of the community. Thankfully, that much of a drastic change wasn’t made, but Goodbye Christopher Robin could have prospered at the box office with a little less dread. For what it’s worth, I still enjoyed the movie, but I wouldn’t write a children’s book about the real-life A.A. Milne anytime soon. But I might write a horror story about his life.