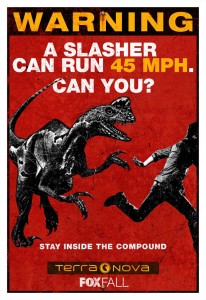 Last year, I was pretty excited to see how the Steven Spielberg-produced sci-fi/fantasy, Terra Nova, would perform on network TV. Alas, at the last moment, it was pushed, due in part, to continuing to work on the special effects. The result: FOX released Terra Nova this year and it received a 13-episode order. Half-way through Season One, it seems the show still needs a little more time to improve the special effects… among other things. Here we are, half-way through the season and absolutely nothing’s happened. Nothing’s changed since the pilot.

The highlight of the show is watching Mr. Avatar (Stephen Lang), sinking his teeth into being a good guy for once. Like a boss. He hams it up a lil bit, but count me as a fan. I also enjoy Dr. Mom (Shelley Conn). Love her acting. Really love her accent. But that goes for practically all the other British actors hired as regulars. And the lone Aussie. Seems a bit odd to only send members of the UK and Down Under back into the past, 85 million years ago. Where’s all the Yanks?

Moving on to The Other Girl (Allison Miller), who I actually like, she adds a lil spice onto the show, but she needs more face time! And how is it that the great antagonists of the show, The Sixers, get absolutely no backstory or interaction with the main characters?

And onto all my complaints! Finally! I truly can’t stand watching any scene that contains any of the annoying lil brats (Naomi Scott, Landon Liboiron, Alana Mansour). I despise each of them, equally. But especially the youngest of the bunch! I realize the producers were trying to make the show kid friendly by tossing in a bunch of kids, millions of years into the past. Pre-historic shenanigans = monster ratings, right? Not quite. The overnight TV ratings have been inconsistent at best, but clearly the show has underperformed. But the people have spoken. The producers don’t know what the show is about. Does it rely on mixing futuristic technology in a prehistoric locale? Is it a horror show, with monsters becoming the terror of the week? What is this show? Nobody knows, and many have stopped watching. I’ll be quitting soon enough.

Each of the seven episodes I’ve watched so far seems to have a slow-plodding plot, which seems to go nowhere. The prehistoric critters, which were featured in the pilot, rarely make appearances. The special effects have actually REGRESSED since the pilot! They look cheap. They look bad. And the producers spent an extra year trying to improve them. Waste of time and money. Speaking of money, this show is very expensive to create. Costs around $4 million to create each episode. Filmed in Australia, this show is leaking money left and right. And is getting no ratings as a result. Although FOX recently announced it had picked up the series for Season Two, don’t get your hopes up. I’m guessing there won’t be a Season Three.

Terra Nova is all about getting a second chance in life, but unfortunately, I’ve run out of patience. I feel ambivalent about all the main characters, actually wishing them to fail, because then something would actually happen. The show had so many great concepts it failed to investigate (such as the dirty future, which is far more interesting than pre-history) or expand upon (will the Timecops of the future ever arrive, chasing that law-breaker, Jason O’Mara, from traveling with his family into the past?).

I’ll stick with the show a little bit longer, but the writing’s on the wall. Even if it’s from the past. This show is doomed.