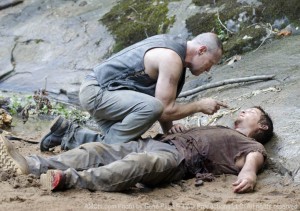 SPOILERS! SPOILERS! SPOILERS!
————————————————
Nerd Alert! Nerd Alert! Full Disclosure: I’m an avid fan of the Coast to Coast AM radio program. I’ve heard tons of tall tales about the Chupacabra, and half expected to see a CGI creature running from the bushes by the creek in this episode. However, when there was none, I was disappointed. But I did like Daryl’s story concerning it.

At first I was going to label this as a Darrell episode, then I got to thinking a bit more and decided this is the “Lack of Communication” episode. Back to the popular formula used on Lost. Multiple characters have different bits of vital information that no one shares. And speaking of Lost, we get a second flashback of the series at the introduction of the episode. It didn’t really reveal any information pertaining to this episode’s plot; it was more like a space filler. The tiny bit of recall it provided at the conclusion was about Sophia’s father, but it only showed him in the intro for a few seconds. Could have been more clear. And done better. What a waste of time. Was this a product of Frank Darabont’s ghost? Or is this a new direction of new Showrunner Glen Mazzara? No more flashbacks! No more Lost rip-offs!

Quite a few new questions arise from this intro, in no certain order, they include: Why are there no radio stations broadcasting? If there’s any humans alive, surely at least one person on the planet would bravely man a microphone? Where is this mysterious Zombie Refugee Center? Hopefully it’ll be explored in a future episode. If there’s enough military soldiers alive and willing to fly helicopters and jets, perhaps they have all fled to the popular undisclosed underground bunker, (as in Day of the Dead)? Or they’ll happen to pop up from time to time, (as in Diary of the Dead). Napalm was dropped in the streets onto zombies. Seems like there’s gonna be some ramifications from this at some point.

Back to the storyline, the gang is still looking for Sophia. The group is spread too thin. And new guy joins the group, speaking his first line of dialog. His name is Jimmy and he’s Herschel’s kid. Where’s he been hiding? I didn’t recognize him at all. Oh, and Merle reappears. He’s a sight for sore eyes! Or, he’s actually a figment of Darrell’s imagination. More than likely, he’s Darrell’s Inner Rage, personified. Something that’s been hidden from the viewer until now, but will reappear in the future. Foreshadowing! Look out!

A lost girl. New and old characters reappear. Daryl’s KO. A trigger-happy Annie Oakley. Repercussions of having sex during the zombie apocalypse. And having dinner in Herschel’s kitchen. Reminds me of my favorite menu item at the Cracker Barrel (Uncle Herschel’s Breakfast)!

Tune in next week for more drama than you can shake a stick (or severed zombie appendage) at.

Episode Strength: Darrell extracting an arrow from his torso and launching it into a zombie.
Episode Weakness: The special effects. A little goes a long way. It’s been two years now, and they still look cheap, tacky and weak. Come on, AMC, pony up a few bucks for SFX!
WTF Moment: Zombies in a Barn! Who Knew? How has Darrell kept them silent up until now? Zombie Silencers!