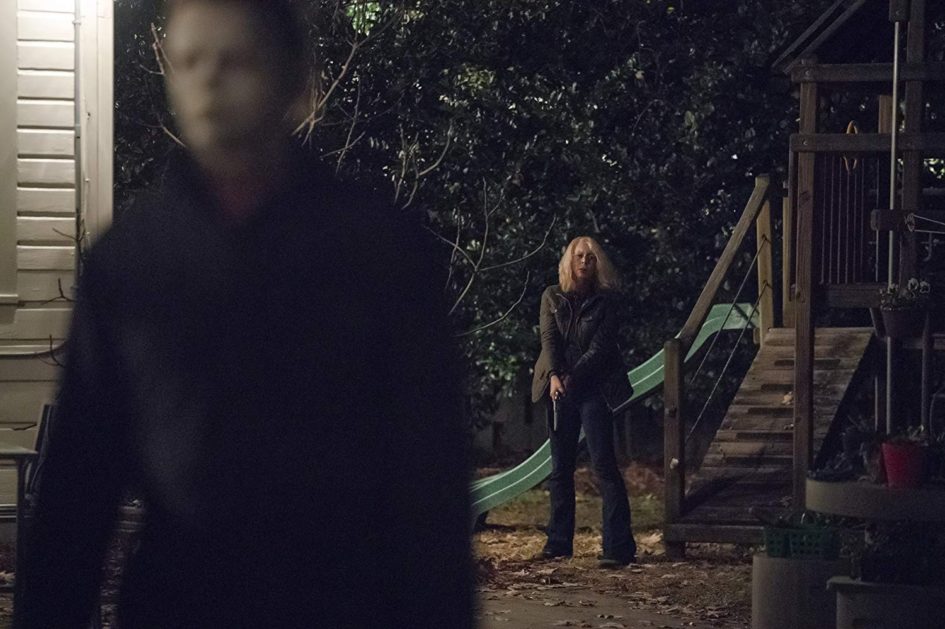 Per Matt
40 years have not been kind to Laurie Strode.

This selective sequel, which ignores the previous seven movies (as well as two remakes), picks up the original storyline… 40 years later. One of the original final girls, Jamie Lee Curtis is seen here as a basket case of her former self, now suffering from PTSD. Naturally, she’s the only person prepared for Michael Myers’ eventual escape from prison, which just happens to be timed right before All Hallow’s Eve.

Throughout the years, Laurie’s been a well-prepared wacko, trained in weapons and ready for his eventual escape via prison transfer. Her daughter was even taken away by Social Services because of these precautions (who now resents her), but even she eventually acknowledges her wrongful ways. The pain and suffering feels real (from both sides of this terrorized family tree).

There are jump scares scattered throughout the film, but these are not the primary focus. In fact, I enjoyed the storyline the most. The gore was an added bonus. There’s also a wink and a nod to fans of the franchise. It’s quick, but Laurie’s dialogue has an Easter egg to fans, as she refers to Myers’ doctor as “the new Loomis.”

Seeing Curtis re-team with John Carpenter is a joy, even if the creator of the original film only appears here as an executive producer. Preparing for this film, I watched and rewatched the first Halloween movie on AMC’s FearFest at least five times within the last two weeks. It really is a great movie. In this new film, Laurie refers to Michael Myers as “The Shape” and I really didn’t remember that in previous movies. In all the reruns I’ve caught this year, I still haven’t heard another reference to him as this, although I didn’t watch EVERY showing and may have missed it somewhere.

It really is good to see Blumhouse Productions taking a pre-established franchise with an estimated $10 million budget and getting great results (as well as acclaim from horror fans). This film really stays true to the original, while previous sequels really suffered from Franchise Syndrome.

I also enjoyed how the writers worked in the real-life timeline that has passed since the original was released. It worked with the return of Luke Skywalker in The Force Awakens and really works here, too. The way Blumhouse ignored previous big-screen attempts of these same characters (much like how Marvel Studios continues the storylines of characters previously told by other studios) is also a brilliant move.

I only wish there was a different title. I get it, this is Halloween for a new age. But if you’re continuing the story of Halloween from 1978, this could easily have been Next Halloween, Another Halloween or even The Definitive Halloween.

The filmmakers approached making this film as if it’ll be the final one, but nobody told the screenwriters that. Danny McBride and Company have revealed that if this movie is a success, then Blumhouse will possibly bring them back to release a follow-up film. But that doesn’t mean Jamie Lee Curtis and John Carpenter will be on board. I guess we’ll just have to wait and see just how successful this film destroys the holiday box office.