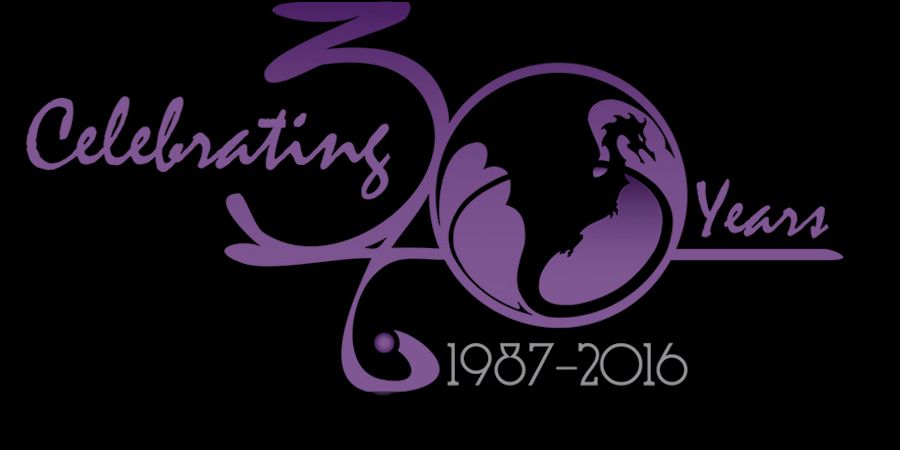 I experienced my first Dragon*Con Labor Day weekend in 2006, and stayed in downtown Atlanta in the midst of the phenomenal annual event that attracts tens of thousands from across the universe, or at least from the planet Earth. Attendance has tripled from when I first attended, when it was around 25,000, and this year it exceeded 77,000.

Congratulations to Dragon Con on its 30th Anniversary! I am also deeply grateful for Star Trek, which is celebrating its 50th Anniversary on television this month. My favorite Star Trek television series has to be Deep Space Nine, which featured a black lead character, something Gene Roddenberry had wanted in the 1960s. 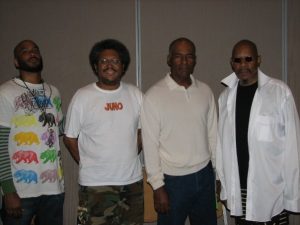 NBC first aired Star Trek beginning with the episode The Man Trap, on September 8, 1966. It was not Gene Roddenberry’s choice, much like The Train Job was definitely not for Joss Whedon’s Firefly decades later. Both times network suits thought they knew what would grab audiences — monsters (Star Trek) and action (Firefly) — and both times they missed the mark. Both shows were more about the characters and their stories and journeys (voyages) than about the monster-of-the-week or whiz-bang action. Star Trek barely recovered from the wretched first aired episode, while the Fox execs’ decision ultimately doomed the Whedon show from the beginning.

Nashville’s WSM-TV (now WSMV Newschannel Four) refused to air Star Trek when it debuted, as did many stations throughout the South, and instead ran a Country Music Showcase in its place. After all, this was 1966 and “Whites Only” and “Colored Only” water fountains and water closets were still in vogue throughout the region, as were other de facto elements of blatant and overt racial segregation. Following a successful phone and write-in campaign by this author and others at the only fully integrated (all-male) high school in Nashville at the time — Father Ryan — WSM finally relented and began airing the program on Sept. 22. We fans had united in concerted action, black and white, male and female, in a reflection of the Star Trek philosophy of IDIC (Infinite Diversity in Infinite Combinations), organized and made a positive change.

I like to think that without Star Trek, there might be no Dragon Con, and definitely not one with more than 77,000 attendees in IDIC in a southern US city.

Follow the logic: The show was canceled in 1969 due to low ratings the same summer that Neil Armstrong stepped onto the surface of the moon. But loyal fans and programmers were able to see the program in a then-new format called “syndication” throughout the country, and they eventually started a phenomenon — the Star Trek Convention — in the early 1970s. Those Star Trek Conventions, along with comic book conventions and gaming conventions, would ultimately lay the foundation for a fandom that could inspire the creation of Dragon Con 30 years ago.

On October 22, 1936, a group of six or seven fans from New York City, including David Kyle and Frederik Pohl, traveled by train to Philadelphia, PA, where, for several hours, they visited a similar number of local fans at the house of Milton A. Rothman; they subsequently declared that event to be the first “science fiction convention.” The first official comic book convention was held in 1964 in New York City. San Diego Comic-Con International is a multi-genre entertainment and comic convention held annually in San Diego, California. It was founded as the Golden State Comic Book Convention in 1970 by a group of San Diegans.

Somewhere in this era, science-fiction television and movies replaced Westerns as the mainstream media and people began to finally focus beyond the prairie frontier to more frontiers in many areas, including medicine and science and technology. Astronauts and engineers and doctors and scientists in all fields freely and often admit to being inspired to their careers by Star Trek.

Without Star Trek there would be no Star Wars (George Lucas has freely admitted it), which has also captivated the imaginations of millions around the world, or Stargate, which has manifested into a major motion picture and three live-action television series. Battlestar Galactica was a “grandchild” of Star Trek, instigated into existence by Star Wars, and its 21st century version is widely regarded as one of the greatest sci-fi TV shows of all time. And the list of influences goes on and on, in terms of myriad medical and technological breakthroughs and creations.

Dragon Con was launched in 1987, as a project of a local science fiction and gaming group, the Dragon Alliance of Gamers and Role-Players (DAGR). The name “Dragon,” for the club, was derived from a member’s Dragon Computer (a European version of Radio Shack’s Color Computer), which hosted a local Bulletin Board System (“The Dragon”) that initially served as a central hub for both organizations. The 1987 inaugural Dragon*Con took place at the Piedmont Plaza Hotel and drew 1,400 fans.

“Numbers have no meaning” is a phrase I have often used throughout my life, and I always need to know what DAY something is, not just what DATE. And by that I also mean that what matters is not the countable, but the comprehensible, the experience that resonates in the mind and heart and soul of a person.

For me, the meaningful experience this Labor Day weekend in Atlanta was of Dragon Con. There were as many people in one place watching an event, such as the record crowd of 75,405 that made their way to the Georgia Dome for that Saturday’s Chick-Fil-A Kickoff Game between North Carolina and Georgia, or the tens of thousands at the Falcons game I went to in the Georgia Dome that Thursday night. But the more than 77,000 who partied for a long weekend, and who actively participated in creating and maintaining the event through dialogue and action and unique attire and expression at Dragon Con were all the true winners that weekend.

Instead of representing one of two teams for four hours in one huge building, fans at Dragon Con represent literally hundreds, if not thousands, of “teams” ranging from anime to Zombies, Star Trek to Star Wars, and many many more “teams” of fandoms, and individually feel and are free to represent more than one at any given time. And they are the game, the attendees are the event, not just a few dozens folks, with everyone else just being spectators.

Furthermore, the Dragon Con “teams” have “clubhouses,” or as I like to call them, “home rooms,” kinda like in high school. Most of the 30-plus programming tracks at Dragon Con have one assigned meeting room in one of the five host hotels or AmericasMart. The fans can decorate as they see fit for the long weekend, and essentially program activities around the clock for four days and nights; yep, stuff starts Thursday night now and runs through Monday.

With growth comes change, and the changes at Dragon Con are also cha-lle-nges. This year I was unable to attend (for the first time in seven years) Sunday’s Miss Star Trek Universe Pageant, held this year at the Westin Hotel, because it was full to capacity. 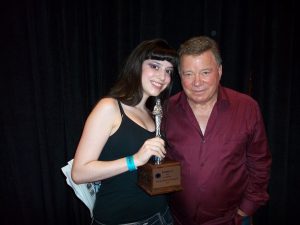 On the final day of this year’s Dragon Con, I was among many fans who were not able to watch the live presentation at 10 am in a full ballroom of the Hyatt Regency as the original Captain Kirk himself, William Shatner, the face of the Star Trek franchise and one of its two most iconic progenitors along with Leonard Nimoy’s Spock, held court. But due to the ingenuity of the convention staff, we are able to watch at our leisure on Dragon Con TV, available online, and I eventually watched the entire presentation when I got home. These are not the only panels that were full that I wanted to attend and couldn’t; and that had not been a major problem for me until this year… Growing pains indeed!

Utilizing the IDIC concept from Star Trek, Dragon Con has indeed caught lightning in a bottle, and by uniting fans from all fandoms — board gaming, LARPing, and video gamers and anime cosplayers and scientists and comic book nerds and superhero cosplayers and science fiction TV and movie and book fans and so much more — it has grown into the huge phenomenal geek family reunion we all love and hope will Live Long and Prosper!