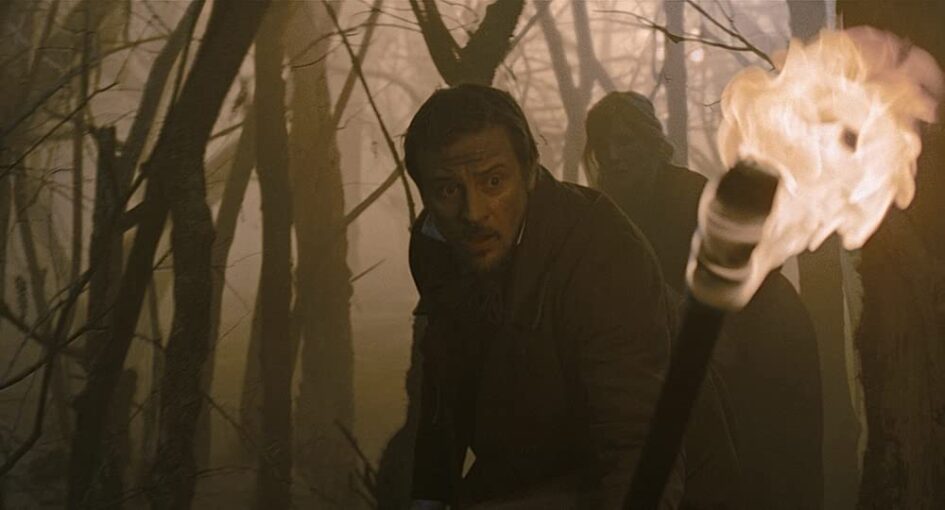 What's that I see? It's The Cursed, now playing in this Hidden Horror Gem installment!

Per Matt
As the Streaming Era grows, with so many entertainment choices at your fingertips, the options are almost limitless. This modern-day golden era of movies offers many marvelous, as well as mediocre options. I tend to venture into a variety of locations on a quest to find something interesting.

As a member of the Music City Film Critics’ Association, I’ve attended in-person screenings of major studios and indies alike. Online screeners are all the craze right now, as watching films on a computer brings a markedly different experience. There are film festivals and then so many streaming services (Too many, if you ask me.). I’ve even ventured onto some independent TV stations to find something good, which was quite the experience.

The following film is a Hidden Horror Gem that was discovered via Redbox!

The Cursed is a film featuring the multi-hyphenate talents of Sean Ellis (writer, director, producer and cinematographer!). Previously titled Eight for Silver, IMDB lists this under the horror, fantasy and mystery genres, although I prefer to classify it simply as a supernatural horror flick.

In a rural French village during the late 1900s, the town elders have gathered to discuss a band of gypsies trespassing on their claimed land. The response is barbaric but predictable by the land baron, Seamus Laurent (cold-bloodedly played by Alistair Petrie). Not long afterward, bad dreams begin to haunt the villagers, as if an otherworldly beast is hunting them all down.

When a group of schoolkids secretly unearths the shallow graves and discovers mysterious silver fangs, little did they know of the unseen nightmare creatures that would be released, seeking vengeance!

Originally premiering at the 2021 Sundance Film Festival and released domestically on February 18th before leaving movie theaters after only two weeks, I can honestly say I didn’t know too much about this movie before watching it. And that’s probably a good thing.

The Cursed is feels like a generic title attached to a new spin on the legendary werewolf mythology. Already, its name was working against its box-office potential. The story, itself, is terrific and the acting is superb. I immediately recognized Petrie from Deep State, Hellboy, The Terror and Rogue One: A Star Wars Story. Boyd Holbrook (The Predator, Logan and The Host) and Kelly Reilly (Yellowstone, True Detective and A for Andromeda) bring it, as well.

This is a gruesome and gory story, one that doesn’t shy away from blood-splattering closeups. It’s brutal, for sure, but it feels authentic for its time period. The Cursed really gives old-timey vibes of The Witch — which I absolutely adored — but this is less artsy. The pace is brisk and the special effects were much better than expected.

While I refuse to give away many spoilers, I’ll just say the ravaging monster in this creature feature, which may or may not be the Beast of Gevaudan, looks unlike any werewolf you’ve ever seen before.

“You and your people are being hunted…”

There’s also a great Behind the Scenes featurette included on the DVD that I rented, which is a recommended watch, although I’m still curious about the overall budget for this film. The creepy, minimalist music does a great job highlighting the scares, as one family’s killer dark secrets might just haunt you, too. I’m looking forward to what Ellis brings to the screen next.

See ya next time for another Hidden Horror Gem!