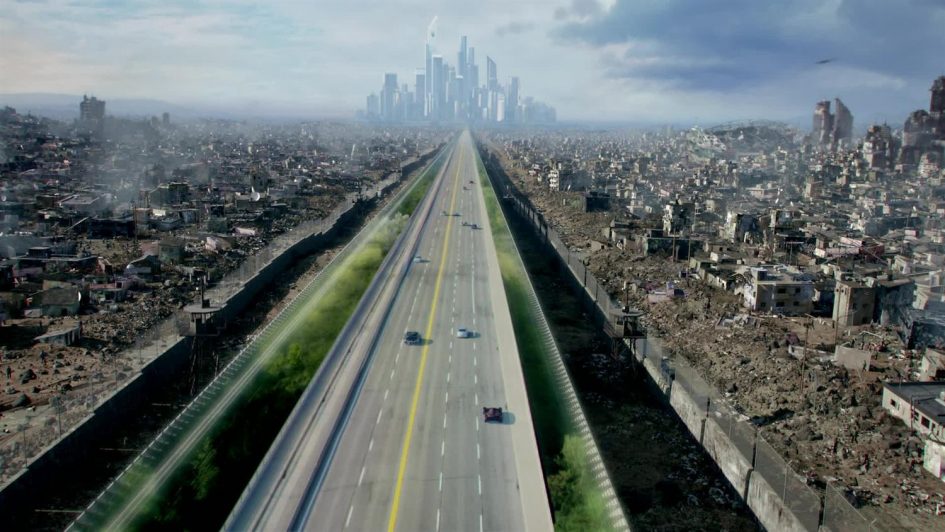 A-listers and long-time friends Matt Damon and Ben Affleck have come a long way since Good Will Hunting. Their latest roles have both been part of huge movie franchises. Affleck’s portrayal of Batman was his first take on the bankable DC superhero in Batman v Superman, while Damon’s titular character, Jason Bourne, was the fourth reprisal in its five-film franchise. Now the two have come together again as executive producers in the new Syfy series, Incorporated.

The TV show, created by David and Alex Pastor, takes place in the year 2074. Climate change has caused catastrophic waste to most of the planet, and only limited metropolitan areas have been designated for a small number of citizens. These Green Zones, as they are called, shelter their inhabitants with a veneer of prestige. The commute to work for people like Ben Larson, a corporate manager at Spiga Biotech, is a feigned display of paradise, with LED walls presenting luscious landscapes, which hide the slums of Red Zones around them. Corporations such as Spiga — which happens to be the largest in the world — govern the land, with traditional forms of government defunct. This dystopian society is a reflection of the fears within society today. All dystopian tales are, really. But the focus on Incorporated highlights three things in general: The neglect of environmental conservation and climate change, the power of corporate entities, and the growing divide between the upper class and the rest of society.

For Ben Larson, life is seemingly grand. Though, just like the Green Zones, what’s on the surface doesn’t reflect his life as a whole. Even his lavish life shows signs of a truly darker time. Things like bacon are hard-to-come-by luxuries, even for rich individuals like himself. Slowly, his intentions within Spiga are not what they first seem to be. Like the average American, he looks like he just wants to manage his life and work his way up the ladder of success. Yet, he faces tense moments of uncertainty, standing in security checkpoints meant to weed out corporate espionage for employees leaving their premises. His unease becomes rationalized later when he ruses a coworker into going to the Red Zone for a night of drinking and drugs (ingested through asthma inhalers) with other corporate colleagues, only to steal his DNA to access company information later. He even shows hesitation when his wife tells him of her acquisition of a permit to conceive. His motivations are muddled and unclear, but it is certain that his intentions of living like a law-abiding citizen aren’t part of them.

The ever-looming threat of being taken away is the progressing issue for anyone living in this society. Violators are whisked away with black bags over their heads to a room meant for torture and most likely capital punishment. Any risks against the corporations will give them free reign to address their employees as they please.

Though the Larsons’ lifestyles and those around them are quite extravagant, certain indulgences are still hard to come by, such as bacon. Then there are the obvious drawbacks. Number one being the ever-present fascism that pulls the strings of their lives. It’s both peculiar and understandable that the slums around the Green Zone are thriving with people. A catastrophic worldwide collapse would seemingly wipe out the masses, but logically, most of those left would gravitate toward the only cities left.

Most of the technological advances seem unimaginative, but with natural disasters as a setback, make sense. Automated cars look both technologically sophisticated and bland at the same time. The Red Zones also have an expected grunginess with fight cages in bars and burning drum barrels in the filth-ridden streets. It’s rational, but nothing that hasn’t seen in other near-apocalyptic movies and shows. Incorporated has the bare bones of a good show without much luster in the details.

Incorporated seems to be a big “what if” cautionary tale for what future generations might be in for, if the world (especially from an American standpoint) doesn’t conserve and maintain itself in the years to come. Many notable dystopian tales have come to fruition, and Incorporated seems to be sending a clear message through its fictional interpretation.