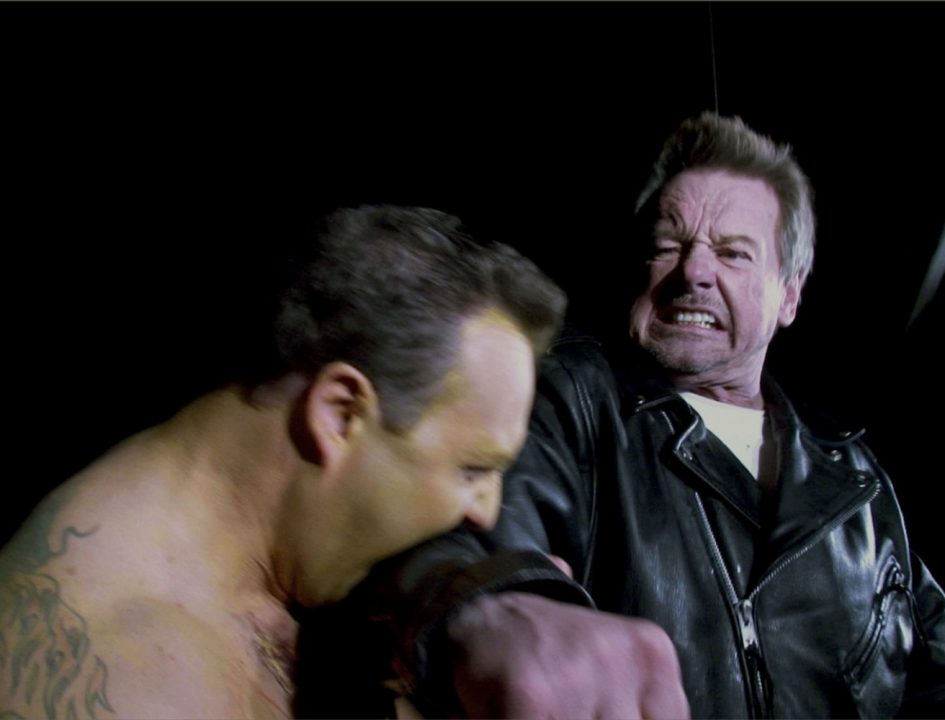 Now, if a title like that doesn’t grab you attention, nothing will.

Welcome back to a new installment of #HauntLife. Today we get to talk about Pro Wrestlers vs. Zombies, a Troma film that puts two of my favorite things together. That’s right… Zombies and ‘wrasslin’.

Growing up, I fell in love with professional wrestling. I was in the third grade, living in the small town of Carthage, TN, known for farms and Al Gore, and not much else. Each year, a traveling book fair came to our school, carrying an abundant collection of Choose Your Own Adventures, sticker books and pencils. My parents would always give a little extra money to pick up something that caught my eye. Was kinda like a treat for getting good grades.

So, I was looking through the treasure trove of goodies when I came upon this thin, blue book with what looked like a superhero on the cover. Being a comic book fan, I took a closer look. The man on the cover had flowing blond hair, muscles the size of boulders and was holding a gold championship belt. But, best yet, it had stickers! That’s about all it took for me. I took this tiny book off the shelf, waltzed on over to the cashier and was soon on my way to the school bus to go home.

When I got home, I got a chance to rip into this book. The man on the cover was called Hulk Hogan, who immediately brought to mind the green-skinned monstrosity I had read in my comics. In this story, Hulk was going to face a man called The Iron Sheik, a man from the Middle East who seemed to hate everything American. Hulk was the personification of everything American, so it was the perfect matchup. Light vs. dark. Good vs. bad. And in the end, Hulk Hogan won the belt (which just happened to be the title of the book). 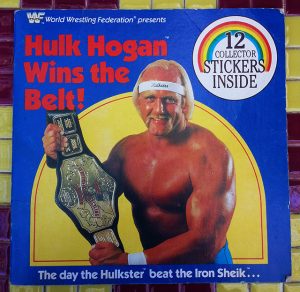 After that, I wanted more. I started watching Mid-South Championship Wrestling every Saturday afternoon. Wrestlers like Jerry “The King” Lawler, Koko B. Ware, “Hot Stuff” Eddie Gilbert all brought their unique personas to the ring. They beat each other with chairs. They dropped each other through tables. They even threw fire, sometimes. It was like watching real-life comic book heroes and villains come to life.

But none of them were Hulk Hogan…

I searched and searched, but could not find this “WWF” company that had this book written. That is, until, I happened to be watching NBC one night (I think my parents were watching Matlock). During one of the commercial breaks, there he was… HULK HOGAN! That Saturday night, he was going to be wrestling on Saturday Night’s Main Event. Even though it was way past my bed time, my dad stayed up with me and watched it. Soon, I had him hooked, too.

For the next 20 years, Dad and I would watch wrestling on TV, or, if we were lucky enough, head down to the Municipal Auditorium in Nashville to experience it first hand. Lots of popcorn, super watered-down colas and many plastic replica belts crossed the threshold to my bedroom all those years. Even after I moved out and went to college, Dad and I still had something to talk about each week. Mom would get involved sometimes, saying things like “I hate that Rowdy Roddy Piper,” and, “Why is he called ‘Macho Man?'” but my father was my “go to” whenever something major went down in the story arcs.

Maybe the closeness that pro wrestling gave me with my father is the reason I love it so. I know the fighting is choreographed. I know the outcomes are predetermined. I know a lot of the “heels” and “faces” spend time together outside the ring, hanging out. But when I watch these shows, I put the “real world” truth away and lived in the world that WWE or TNA or RoH offered me. And I love every minute of it.

OK. I know you are probably wanting to hear my review of Pro Wrestlers vs. Zombies now. I figured I would get a little backstory in, so you know that I am well versed in the wrestling world, almost as much as the haunt world.

This film stars two iconic wrestlers. The first is Shane “The Franchise” Douglas, the man who, with the help of Paul Heyman, started the ECW revolution. The second is the late Rowdy Roddy Piper. Roddy passed away in 2015, but had left a lasting legacy as not only being one of the best “bad guys” in the business, but also one of the first wrestlers to break into the film industry, mainly in B-movies, but was best known for his work in They Live, a personal favorite of mine.

The plot of this film is simple: After accidentally killing a man in the ring, his brother, Angus, plots revenge on Shane Douglas. Under the guise of a promotional event, Shane, along with several other wrestlers, including Roddy Piper, are duped and bused into an abandoned prison. Inside, the wrestlers are in for the fight of their lives. As it turns out, Angus has taken up necromancy and has risen a horde of Zombies to kill them all. In an all-out assault, the wrestlers are swarmed by wave after wave of the undead, leaving only Shane, Roddy and a girl named Sarah alive. Facing overwhelming odds, the survivors have a fight to the death to stop Angus.

I must say I really liked this movie. I think this movie about sums up three things I love: horror, wrestling and Troma films. The acting was about what you would expect. Neither great, nor poor. I do have to say I was not a fan of the constant music playing throughout the film, as sometimes it overpowered the dialogue between characters. The special effects were OK, good enough to get by for a B-film, but far from the likes of today’s Hollywood FX artists. And the action was decent. One great thing about wrestlers is their ability to sell punches, kicks and just about everything else.

I give Pro Wrestlers vs. Zombies four out of five stars. If you are looking for a rare gem in the Troma library, sadly, this movie is not for you. But if you are a wrestling fan who loves over-the-top violence, fights and the wrestling dead, then by all means find a copy of this film today. You won’t be disappointed.

Thanks again for checking out my review. Until next time, enjoy the #hauntlife.