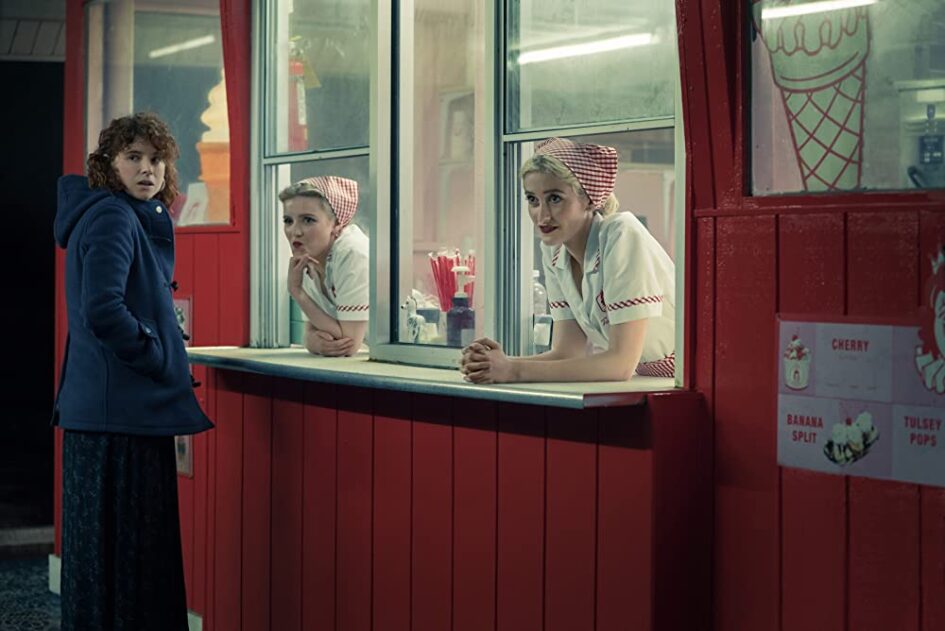 Per Matt
I’ll admit, throughout the years, I’ve become somewhat obsessed with the writer, Charlie Kaufman (not to be confused with the director, Charlie Kaufman). Being John Malkovich was a pure joy. Eternal Sunshine of the Spotless Mind was terribly underappreciated. And Adaptation was pure genius (if you’re a frustrated writer, you’ll totally get it).

Much in the way the filmmaker can’t be removed from his fictional brother, the writer and the director house dramatically different personas — sometimes it is unfortunate the two can’t be separated. As a writer, Charlie pinpoints absolute thoughts and feelings about humans’ frail life experience and extends them into beautiful conversations and experiences between fractured characters that is absolutely a joy to behold. But when he’s behind the camera and given more responsibility, with nobody else calling the shots, the results become a mixed bag. Sometimes he just needs somebody to tell him no, along with a very strong-willed editor. It is with this hesitation I approached his latest endeavor, I’m Thinking of Ending Things.

The majority of this film is spent inside the cramped confines of an older sedan, as a relatively young couple takes a road trip to visit his parents, who live out in the country, after only dating for seven weeks. What proceeds is a psychological-horror shitshow for Jessie Buckley (who goes by multiple names during this misadventure). As you can guess, her character has finally realized that she’s ready to end things, but can’t seem to stand up for herself, continuously wallowing in self pity.

Jesse Plemons’ Jake is great at being awkward and the never-ending embarrassment brought on by his parents is clearly on display during this visit, which was probably made too soon. But those are natural reactions whenever families and relationships are brought together. In all his timidity, he truly cares for her, but he can never quite express his feelings properly. There’s a seamless transition from rambling-thought monologues to stitched-together dialogues between two people who are clearly not listening to each other, and that in itself is a huge problem. Moving forward, the situation for these characters only becomes more bleak.

“Everything has to die.”

Even this lifeless relationship, it seems.

The overall plot involves a puzzle of hopelessness, yearning to be expressed and heard — not necessarily resolved. Kaufmann’s a genius writer, he’s absolutely a perfectionist, but his scenes here can be a little boring, often veering off into Aaron Sorkin-like depths of self-gratification. Sometimes they’re funny for all the wrong reasons. I’m reminded of the inner battles I’ve had, myself, in past relationships, during both the failed and successful ones. So, how much drawn-out uncomfortableness is enough for Kauffman? After watching every second of the film’s two hours and 14 minutes, this almost feels like a spiritual sequel to Eternal Darkness. But is this a very long cautionary tale? Because that’s the way it feels.

I’m Thinking of Ending Things was painful to watch, but I did enjoy the moments when the storyline developed, changing from drawn-out conversations to something actually happening on screen… which then returned to more extended observations and regrets of life. There are so many things to read into, only one of them is our subconscious thoughts about not seeing eye to eye with your lover. Kaufman’s work is incredibly interpretive, much like the topics these characters discuss, but I truly did not like the abrupt, anticlimactic ending (which feels like an expectation when dealing with Kaufman’s work as a director).

The extended story could be attributed to the novel’s source material, but it leaves me with a melancholy feeling, much like what one of the characters discusses (and the same feeling I had after really enjoying Up In The Air, followed by calm, lingering sadness). Kaufman could very well win another Oscar for this screenplay, but I hope he doesn’t, as his past works were so much better and it would only be given to make up for past snubs. His direction here isn’t the greatest, although the interpretive dance/fight scenes near the conclusion are epic (and 100 percent a Kaufman creation), but they can’t make up for the obvious lip-synching of showtunes that followed, lasting way too long.

The lead actors are fine, but it’s Toni Collette who’s at her bizarre best, successfully pulling off a variety of personalities.

Dating and relationships during the age of COVID-19 is difficult enough, so watching these complicated on-screen dynamics isn’t exactly one I am actively seeking for an evening of Netflix and chill, or any date night, for that matter. As a cinema aficionado, this is absolutely the type of Hollywood entertainment I truly enjoy watching with others inside movie theaters. Watching it on a TV screen just feels criminal.

I’m probably one of the few people who hasn’t watched Confessions of a Dangerous Mind, but I have always really wanted to. And with this film’s release, I’ll probably get the opportunity to see in on premium cable sometime soon. I assume I’ll watch it, wishing a different director could have adapted Kaufman’s script, so that I could enjoy Ending Things just a little bit better. At one point, the lead characters dig through their fears and wind up discussing film criticism that feels eerily like Kaufman’s self reflection of this very film.

Maybe Writer-Director Charlie Kaufman really is dead on the inside like these two characters, or maybe he just couldn’t elevate the material to his high standards. Regardless, I did enjoy the car-ride discussion about insects, viruses and ganglia. And much like the topic at hand, it’s hard not to use the word “suck” in describing elements of this Kaufman feature film.