Making a Deal With the Devil: It’s the Elmore Leonard Way 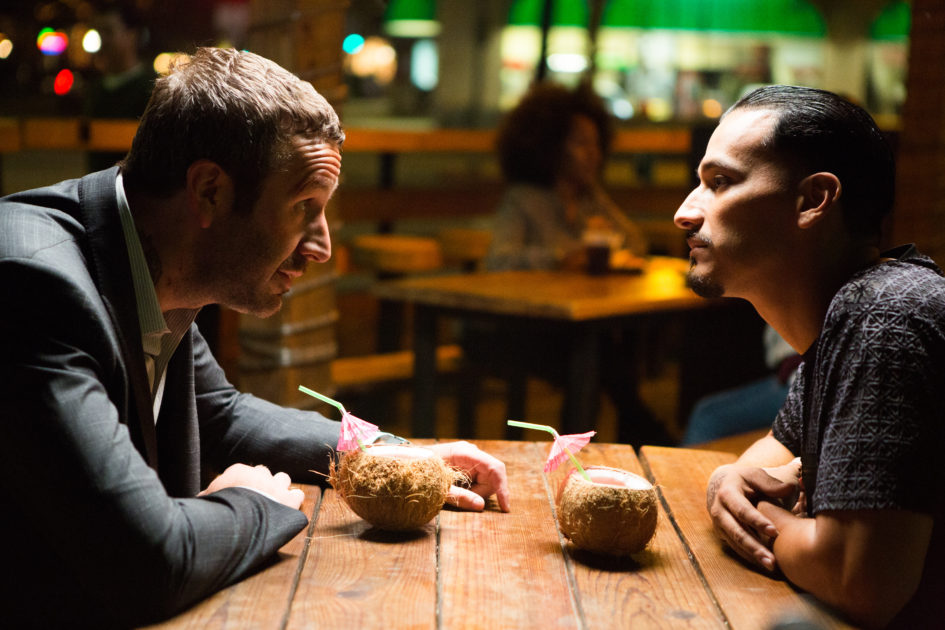 Miles (Chris O'Dowd) gets tropical with Yago (Goya Robles), making a deal with the devil on Get Shorty. Photo Courtesy: Epix.

Per Matt
Half-way through Season 2 of Get Shorty and I can safely say that Elmore Leonard would totally approve of this adaptation of his source material. Epix has built a great ongoing storyline from the writer’s novels and molded the show into something even bigger and better than both the book and the movie combined that share the same title.

At the conclusion of Episode 5, the showbiz satire has focused on releasing a Hollywood period piece that was funded by organized crime. The director’s release of The Admiral’s Mistress is a disaster, which leads to Miles re-editing the film within a marathon 24-hour session. He goes from getting hooked on alcohol and cigarettes, to ADD prescription meds. But he gets the job done. At the premiere, the star of the movie is killed, which leads to the film’s rights getting sold. Lulu and Gladys agree to get secretly married, while figuring out the pregnancy and everything involving their relationship afterward. And Rick’s life is held within the hands of both the FBI and Amara.

Everyone’s getting pulled into different directions: Rick (Amara, FBI), Lulu (Gladys), Miles (Katie), Amara (Miles, Rick) and there’s no set of instructions for these characters to follow (other than the groundwork laid out by Leonard). From being a mobster to a Hollywood producer, these are complicated characters, which leads back to the title of this article. Since the pilot, Miles, the career criminal, has been struggling to escape his sordid past and live a much more “respectable” life as a Hollywood producer. But in order to do that, he must make a deal with the devil. In Season 1, that means he must work a scheme with his mob boss, Amara (played intricately by Lidia Porto), hoping to break away once it is successful. But she’s dug her nails in deep and refuses to let him escape so easily.

In Season 2, while working a “Christmas miracle,” Miles ultimately reaches that goal. But instead of moving on to more manageable projects, he jumps headfirst into a business venture with an even bigger and badder organization to fund a new movie: The Capitulo Cartel of Los Angeles, which happens to currently be Amara’s superiors. On top of that, Miles works out a deal with Agent Dillard (Felicity Huffman), in hopes of busting the LA cartel. Huffman’s very good at getting everything she wants within the Bureau, kind of a yin to Amara’s yang. The characters are very much alike, just working different angles. That’s doubling down on the devils for Season 2!

Hollywood’s addictions are briefly approached. There’s a great scene recreating the pilot on a production lot in Episode 5. Yago has an eye-opening freestyle rap demonstration. A thinning of the supporting characters has begun, as the services of Amara’s accountant and maid are no longer needed. Steven Weber has been unrecognizable as the hairless studio exec and Miles has a temper. He doesn’t throw just any sort of mild tantrum. But a mega-tsunami sharknado trail of destruction that burns everything (and everybody) in its path. Hopefully, this won’t derail his new career path, but it would definitely make for great television!

Get Shorty definitely pays attention to the finer plots (And we all know the devil’s in the details!). Looking for a new project, Miles finds Wylderness, a book about getting lost and finding yourself out, which basically sums up the character’s entire situation in Season 2. Really looking forward to seeing how this second season wraps up. There’s no doubt it’ll be electric. Hopefully, somebody gets burned while playing with fire and their dealings with the devil will ultimately prove to be a bad decision.