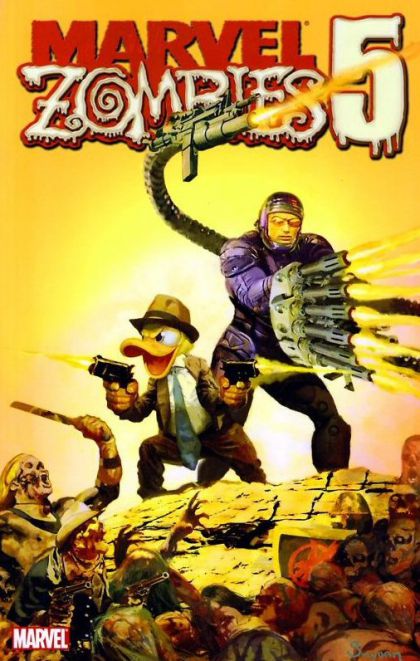 Slowly but surely, the Marvel Zombies storyline is piecing itself together. Directly following the events of Marvel Zombies 4, Marvel Zombies begins with a familiar character, Machine Man. Also known as Agent Aaron Stack of A.R.M.O.R. (Alternate Reality Monitoring & Operational Response agency), Machine Man is mysterisouly paired with Howard The Duck to investigate a planestorm spreading the zombie virus throughout the multiverse. This “funky space fog” awakens all corpses, turning them into undead killers.

Interdimensional travel has been forbidden by Director Little Sky, but Dr. Morbius sends the pair anyway, hoping to grab a fresh zombie specimen from each dimension, in order for Dr. Morbius to create an antidote. Each universe has different zombie plague. And with each plague comes different zombies, including Ghoul Type-0211 Boyle, Ghoul Type-6810 Romero, Ghoul Type-834 Raimi and Ghoul Type-928 Jackson. Clearly, each type was affectionately named after various zombie movie directors.

Along the way, the pair meets Jacali Kane, also known as Swift Cloud, who eagerly joins the mission in hopes of visiting new worlds. She gets that and more as the trio visits the far-off lands of a lawless Wild-West; a reality where H.G. Wells’ War of the Worlds is fact, not fiction; Camelot; a cyberpunk dystopia and Earth-0000, oddly similar to our own.

Unfortunately, many necessary details are omitted from this storyline. And because of that, this series may be falling into obscurity or worse… cancellation. First of all, this storyline follows Machine Man, who was last seen in Marvel Zombies 3, not part 4. Why is Howard The Duck paired up with him? Is Howard immune to the zombie plague? Was Howard’s character randomly chosen because he was the only B-Character left unused? Besides his inclusion in the story, there was no intro-duck-ion to Howard The Duck, he was just there, no reasons or backstory. This is terrible writing, shame on you for being so lazy, Fred Van Lente!

Another reason the storyline feels very light is because the protagonists basically have no one to fight. There weren’t many, if any, Marvel Universe villians as proper antagonists, which is a HUGE letdown, after all the other collections used so many (and naturally killed them off). The heroes basically fight hordes hordes of background characters, except for the few panels where someone is specifically mentioned… quickly followed by a disappearance from the storyline. Not only is the storyline bare, but the actual size of the hardcover collection is getting thinner and thinner, with each release. Fewer characters involved, fewer conflicts resulting in fewer total pages of Marvel Zombies. This can’t be a good sign for the future of this undead series. Here’s to hoping it improves… quickly.

Strength: My intro to Howard The Duck.
Weakness: Didn’t like the art so much. Few good one-liners.
WTF Moment: The Cyberpunk Dystopia felt too much like The Matrix and Neuromancer.

Notable Quotes:
– “Sorry about my friend… he’s got kind of a fowl temper.”
– “Pacifism and zombie apocalypses ain’t winning combinations!”
– “Zombies have saved the Earth!”
– “I don’t speak your crazy moon language!”