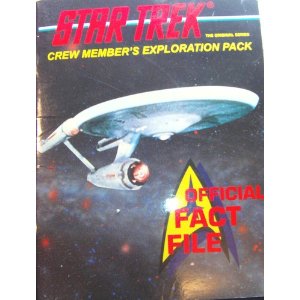 Recently, I happened to catch the climax of Star Trek: Generations on late-night cable. Thinking back, I remembered the first time I saw this movie, and how I was saddened by the uneventful death of the great James Tiberius Kirk to Malcolm McDowell’s Soran, but happy to follow my favorite crew via feature-length movies. Oh, how I loved The Next Generation! It’s too bad most of their movies absolutely stunk!

On a whim, I thought it’d be fun to write up a review for the Star Trek The Original Series Crew Member’s Exploration Pack — Official Fact File. Technically, this isn’t an actual book, because it’s only 24 pages long. But it is a fun, quick read. And it’s a nice addition for the webpage.

This is basically a Star Trek: The Original Series For Dummies! Brief summaries are given for each of the main characters, Starfleet, The U.S.S. Enterprise, warp speed, equipment, aliens and other life forms and the Klingon Language. Included at the end of the book, is a Crew Member Quiz. It may surprise some, but I failed the quiz. I never saw TOS on television, and to this day have not seen many, if any, complete episodes. I am, however, a big fan of each of the Star Trek movies, especially those including TOS crewmembers. With that admission, I hope my Geek Cred is not revoked!

Published in 1996, portions of this book come from The Star Trek Encyclopedia. So, it must be official Trek canon… that is, until J.J. Abrams released his movie, Star Trek, and basically deleted everyone’s backstory.

Notable Quotes:
– “The surge of adrenaline protected him from radiation sickness that caused the aging process.”