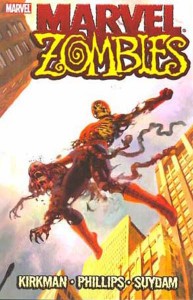 It’s taken me a little bit, but I’m finally getting around to reviewing the complete collection of Marvel Zombies. In just over a two-week timespan, I collected each of the graphic novel collections up to current date, in a cross-country roadtrip of epic proportions. And to add to the epicness, each of them (a few hard covers, rest are paperbacks) was discounted, many pillaged from the EVERYTHING MUST GO clearance sale of many Borders bookstores.

With all the recent hype Robert Kirkman has been getting (AMC’s The Walking Dead TV series), I thought it was about time I wrote up brief reviews of each of the trade paperback collections. While the storyline timeframe is a bit confusing, seemingly going forward and backward per collection, due to multiple dimensions. I will review them in what-I-believe-is correct chronological order.

In reading the foreward, immediately after Robert Kirkman reveals “I didn’t want to be the zombie guy,” he states Marvel’s wish to expand upon Mark Millar’s initial concept of introducing zombies into the Marvel Universe, briefly revealed in Ultimate Fantastic Four. For some reason, that introduction will be re-printed in a later edition (Marvel Zombies: Dead Days), but until then, the spin-off will be reviewed right here, right now (Marvel Zombies).

This is definitely Robert Kirkman’s interpretation of the Marvel Universe, with a side of Zombies. His focus is on the main superheroes and their descent into The Hunger. He unsuccessfully tried to make the storyline so gory and grotesque that Marvel would ask him to tone it down… everything within his vision was left intact.

“It started with a flash in the sky, and a ripple through the clouds. The hunger is what brought it here – and feed it did, until the Marvel Heroes were no more. They were replaced with soulless monsters, driven only by an insatiable hunger for human flesh.”

That’s really all the backstory that is given (and needed). I grew up with DC comics but know enough about the Marvel main characters to be considered dangerous.

Magneto believes he’s trapped these superhero zombies in their current dimension — and him with them. No escape route possible. Asteroid M houses what’s left of humanity: all 12 survivors (members of The Acolytes).

Although they’re considered the undead, each superhero (and villian alike) retains a semblance of their personality. They dont feel pain, can’t totally digest food and briefly, after eating, their minds can focus on non-food ideas. Such as figuring out ways to work together, which doesn’t happen too often. The heroes (and villians) are hungry, and the food supply is thin… until Silver Surfer appears, announcing the imminent arrival of Galactus. Ultimately, seven heroes band together and defeat Silver Surfer, then Galactus, devour both; absorbing all former powers of the deceased in the process. The remaining jealous mutants revolt and it leads to cannibalism at its finest.

The lone surviving (and mutilated) superhero, Black Panther, gets rescued, along with the severed, zombified head of Wasp. They’re transported to Asteroid M, get all healed up (Black Panther gets prosthetic body parts, Wasp’s head is enclosed in glass with a robot-like body) and five years later, Panther now has an infant son with wife, Lisa Hendricks.

The comics are gory, gruesome and great. Spidey loses a leg, Hawkeye loses his head, Banner’s stomach bursts open a human leg, and Iron Man becomes a flying torso. Storyline leads up to an imminent sequel. This first wave of individual Marvel Zombies comics was an immediate best-selling hit, spanning multiple covers of each issue, and eventually a tradepaperback covering each of the covers. ‘Natch!

Can’t wait to review the next series!

Noteworthy Quotes:
– “I didn’t want to be the zombie guy.” – Roberk Kirkman
– “We’re dead but we’re not dying.”
– “As long as our brains are intact and functioning we’ll continue on as is.”