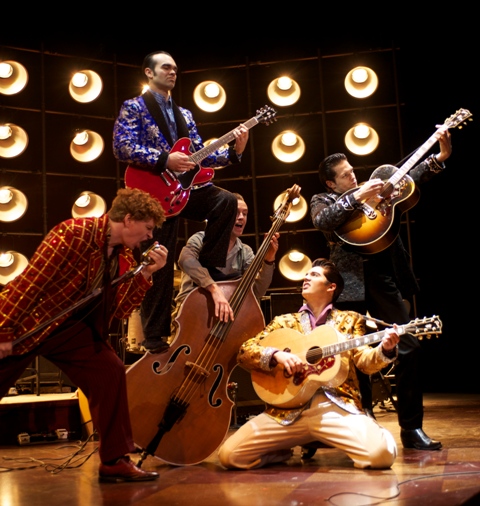 Sam Phillips, the undisputed Father of Rock ‘n’ Roll, molded the careers of Elvis Presley, Johnny Cash, Carl Perkins and Jerry Lee Lewis at Sun Records in Memphis, TN. On December 4, 1956, Phillips united all four legendary performers for an impromptu jam session that wound up being the one and only “hillbilly homecoming” they’d experience. Million Dollar Quartet features a recreation of that fateful night, which features celebrations, broken promises and betrayals wrapped around many timeless hit songs.

The musical begins as a recording session for Carl Perkins (James Barry), where the Rockabilly King is desperate for another hit song. Perkins (Vince Nappo) brings in a young and untamed Jerry Lee Lewis (John Countryman) to inject some energy into Perkins’ music. Dropping in on the session is Elvis Presley (Cody Ray Slaughter), who is desperate to return to his roots at Sun Records, after his record contract was sold to RCA. All of these arrangements are meant to celebrate the Man in Black, hoping to entice Johnny Cash (Scott Moreau) into signing a new contract with Sun, which backfires brilliantly when Perkins’ broken promises are brought to light. Along the way, the super-star entertainers collaborate for an incredibly entertaining and rocking good time.

Nashville’s own songwriter and co-founder of the country group BR-549, Chuck Mead, provided the musical arrangements and supervision for the production, keeping the show enjoyable and believable for both members of the music industry and Broadway fans alike. The entire cast consists of eight people onstage, who seamlessly sing, act and perform for the duration of the show. James Barry’s Perkins sounds and feels like an authentic lower Broadway performer found in downtown Nashville and Kelly Lamont’s Dyanne, who appears as Elvis’ girlfriend, steals the spotlight in this all-guys show. Scott Moreau’s Cash resembles his namesake character the most and Cody Ray Slaughter’s Elvis is the absolute best performer of the bunch.

Throughout the show, Perkins continually bickers with Lewis, who is often the butt of his jokes. While they contribute great comedic timing that keeps the show moving, they also reveal an underlying clash of millionaire egos, apparent within each of the larger-than-life personalities. The jam session that breaks out is both an homage to thank Perkins for all his hard work, but also previews a departure for the talents, soon-to-be heading toward new musical destinations.

The Tony Award-winning musical arrives at the Tennessee Performing Arts Center for a limited time, so make sure you get your tickets as soon as possible. I absolutely enjoyed every song. With no intermission, the show continually rocks until the very end!