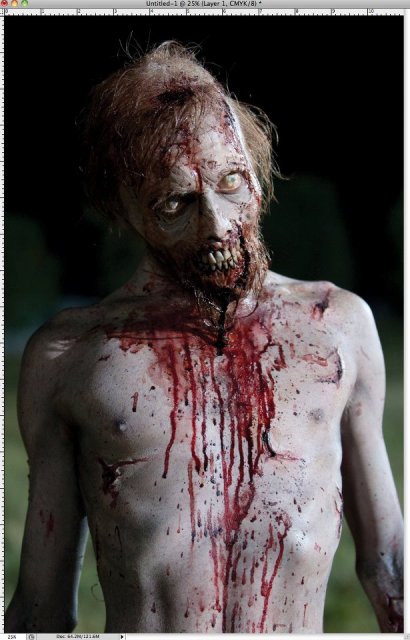 Per Matt
Kevin Galbraith has experienced something many of us can only imagine: Death. And not just once, but several times. Kevin has appeared as a Zombie on The Walking Dead multiple times and discussed his experiences with us. He is also interested in the archival preservation of physical media and has a traveling retail sideshow, Reality Tunnels, which he promotes at various conventions around the country.

How did you first get involved with AMC’s The Walking Dead?
– “I got my foot in the door shortly before Season One began filming, so timing was a crucial factor. Tens if not hundreds of thousands of people submit to be Zombie extras these days. It was as simple as responding to an open casting call that needed “tall and skinny people to be Zombies on a TV show…” The pilot was being filmed 10 minutes from my house, at the time. George Romero is my hero and I look like a corpse as it is, so it was pure serendipity.”

What was your first experience with The Walking Dead?
– “I went to the main production offices for a wardrobe and mask fitting before appearing in Season One. I got the royal teaser treatment there. The ‘Don’t Open, Dead Inside’ doors were set up, Dale’s iconic Winnebago was parked inside the studio, all kinds of gore, guts and bodies littered the place. It was all capped off by being introduced to Greg Nicotero. I couldn’t have asked for a more surreal introduction to The Walking Dead.”

Had you read the comic before appearing on the show?
– “I picked up the first two trade paperbacks a few days before the wardrobe fitting, so I had a quick introduction. I have since become a devout follower of the graphic novel series. Praise be unto Kirkman…”

Do you prefer the graphic novel to the TV show?
– “Both the TV show and the graphic novel have their strengths and weaknesses, but if for no other reason than being published monthly and year-round, I gravitate more towards the comics. Don’t get me wrong, I don’t think anyone could ask for a more well-done and intense ‘Zombie’ show. I never get tired of the complete curveballs and alternate story lines that the TV adaptation throws at the audience in every single episode.”

I’m guessing you’re involved in the acting scene in Georgia?
– “I initially became involved with acting only because of The Walking Dead. Otherwise, I’m just your run-of-the-mill Georgia State University student who loves Zombie movies.”

Once chosen, did you attend a Zombie School?
– “Not everyone who appears as a Walker on the show attends Zombie School. As far as I know, Zombie School has taken place at least once at the beginning of each season as an ‘intro program.’ Everyone coming in after Zombie school is usually put through on-the-spot lessons during filming. Since I didn’t attend Zombie School, my advantage came from I had grown up with Romero’s classics (Night of the Living Dead, Dawn of the Dead, Day of the Dead). I’d hate to sound too arrogant, since there always seem to be kinks to work out. Many of us fans have already been ‘living’ Zombie School for quite a long time.”

Was makeup a terrible ordeal?
– “Swamp Walker was shirtless and required a tremendous amount of textured airbrushing and scrutinous detail. Each of the three days Swamp Walker was filmed required approximately three hours to apply all the makeup and close to an hour to remove at the end of the day. I found myself treating the make-up trailer like a second home after a while. I gotta hand it to the guys at KNBefx for being able to churn out such intense pieces of art on a daily basis.” 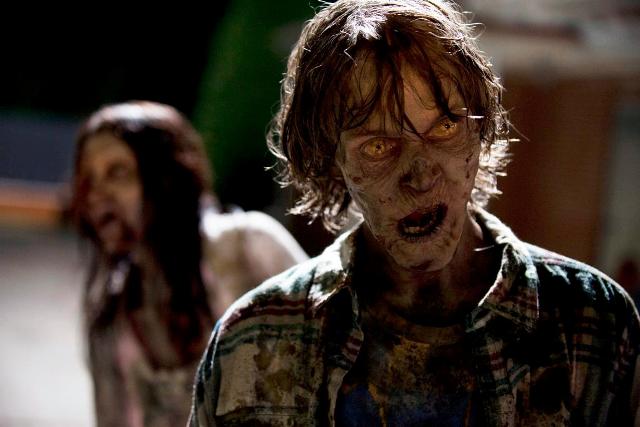 Was the makeup itchy?
– “Itching wasn’t much of an issue, but some of the other discomforts certainly got to me at one point or another. One of the problems with the fake teeth is that under the pieces, the wearer’s own mouth is constantly open, allowing drool to seep out of the corners and drip down into the chin and neck part of the latex. The drool and bloody mouth gunk pools up and squishes around inside the mask until it’s removed at the end of the day. For me, the neck-slime thing was more of a psychological, ‘nails on a chalkboard’ kind of grossness that bugged me the most.”

Did the makeup constantly make a mess?
– “Not at all. KNBefx’s toolkit is filled with some of the most heavy-duty stuff you could imagine. During a June shoot for Say The Word, I played a Walker that was dragged out of the pits in a net, then was held down and had my teeth pulled by Merle. The makeup and wardrobe that day consisted of long pants, a long-sleeve flannel shirt, a full-face prosthetic and a bald cap. Bearing in mind that 70 percent of one’s body heat exits through the head, those pit scenes were filmed at midday during record-breaking June heat in Newnan. I actually had to Google the weather history to make sure I wasn’t exaggerating. It was around 108 degrees that day. Im pretty sure I melted more than the makeup.”

Did the makeup attract bugs?
– “Not particularly, except perhaps in the case when the fake blood was sugar-based. As I’m sure most of us know, certain areas in Georgia at certain times of the year are a bugpocalypse regardless of what you’re wearing. There are ants, ticks, mosquitoes, spiders and all kinds of biters that make the Zombie biters look like harmless kittens. It’s particularly hilarious to see people in full Zombie makeup freak out, scream and run around frantically when they encounter the insect life.”

Did you have any interactions with the main actors during down time?
– “I had several opportunities to chat with Jon Bernthal. Jon is especially nice in real life, possibly to balance out the perception that he’s a bad guy like Shane, but almost assuredly because he’s just that great of an actor. The Southern accent could use some work though, hehe. Norman Reedus, Jeff DeMunn, and Scott Wilson were also kind enough to hang out with me in the tent during the Swamp Walker filming, though I suspect having the only tent with a heater had something to do with their interest. Again, they were very down-to-Earth people who chatted with me about all kinds of different topics, from convention life to psychology to Angry Birds to yoga and meditation.”

Do you have any personal stories with Showrunners Frank Darabont or Glen Mazzara?
– “I didn’t get a chance to see Frank during Season One, though I received some flattering compliments from him through the grapevine, when we filmed the rooftop walker scene. Greg Nicotero had emailed some photos of me to Frank, who replied with something along the lines of, ‘Man, that guy looks awesome!” Definitely wishing Frank the best and can’t wait to see what he’s got next. As for Glen, he is very much an ‘off-the-set’ kind of guy, but he selected Swamp Walker as one of his favorite Season Two Walkers, which I consider to be all the acknowledgement, flattery and communication I could have hoped for. It’s a shame that Glen is departing as Showrunner, but the The Walking Dead is in great hands for Season Four with Scott Gimple taking over.”

Is this your first visit to MomoCon?
– “Yes. 2013 was my first MomoCon, even though I’m a Marietta local and have heard about it for many years. I’ve done my fair share of sci-fi, comic book, horror and general pop-culture shows in the last year, but MomoCon was the first anime/gaming-focused event that I’ve participated in as either a guest or a regular backpacking, con-going fan. I was definitely caught off guard by the unique kinds of camaraderie and relationships that have flourished in the meantime, with the people I met at MomoCon. You can bet that MomoCon will be on my calendar every year from now on, as long as I can help it.”

Will you be attending DragonCon?
– “DragonCon is my end-all, be-all con event. It’s like Halloween and Christmas’ bastard lovechild on steroids. I’ve only missed one year since 2006 and I look forward to it more and more with each passing year. 2013 will be my first year as a Tech-Ops volunteer for the event, so you might run into me in that capacity. Otherwise, DragonCon is my time to be the enthusiastic fan immersed in the rest of the horde. After all, four days isn’t even enough to see every event, panel and friend that I aim for every single year. You wouldn’t be able to keep me behind a table if I did the guest or vendor thing.”

What other projects are you involved with?
– “I’m trying to complete my Psychology degree at Georgia State this summer, while developing my side business. Reality Tunnels is a self-run physical media preservation project that specializes in rare and obscure used books, videos, cassette tapes, video games and other dead formats/pop-culture oddities largely from the 1960s until the present. 2013 has been a great year, as I’ve been able to set Reality Tunnels up as a full-fledged vendor booth at many of the local conventions that I otherwise attend as a Walking Dead guest. If you came by my table at MomoCon, you caught a small glimpse of Reality Tunnels in action. The rest of the year will see more expansion and presence at conventions and as an online database/webstore. In the meantime, you can check out Reality Tunnels on Facebook. More detailed information about Reality Tunnels can be found under the about tab.”