Movies That Stick With You 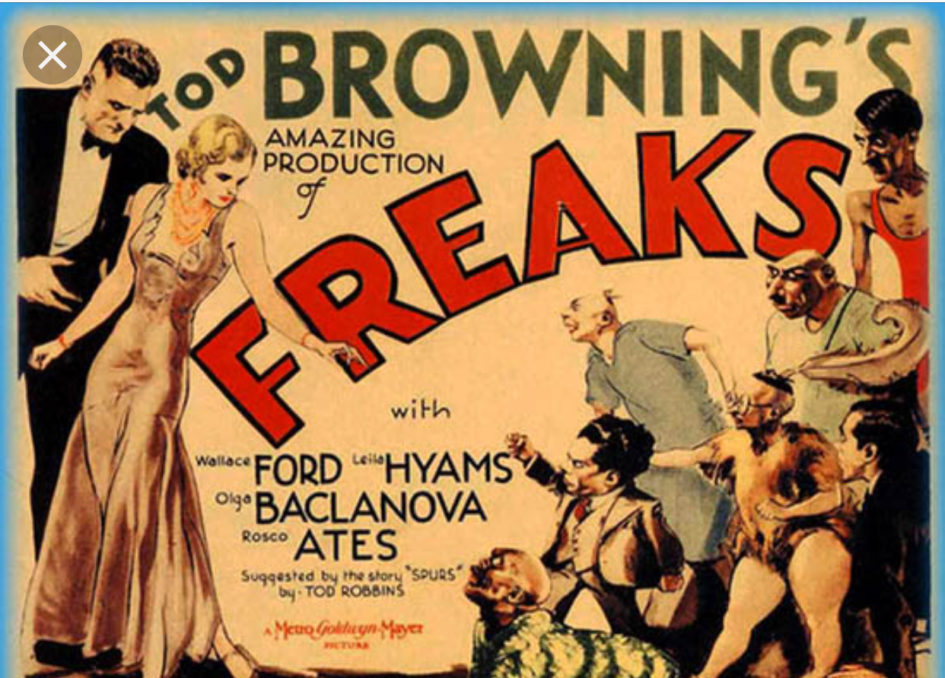 Welcome to what may be an uncomfortable conversation for one or both of us. It is actually one of the scariest subjects for me and I have goosebumps right now just thinking of it. Have you ever seen a scary or horror movie that fascinates and creeps you out at the same time? We are going to discuss films that stay with you, even if you don’t want them to. In fact, they may actually make you dream about them.

Freaks is a black-and-white film from 1932. This movie was unique because it used actual circus freaks in the movie. These were people who had deformities who were kept in the shadows, so they wouldn’t scare the “normal” people. A pretty trapeze artist planned to woo and fleece one of the little people. After his suspicious death, the group gets its revenge, turning her beauty into a freak show. After seeing Freaks, I was disturbed. For a long time, that movie stayed with me. As I said earlier, I still have goosebumps when I think or talk about it.

The second movie is Sssssss in 1973. I know it is a weird title, but it was a time when low-budget movies thrived and the rise of horror movies were just coming into their own. I actually almost got my wrist broken, because my husband (at the time) grabbed my hand when a close-up of a snake startled him. This transformation was chemically induced. The special effects weren’t the best, but just the idea of a human being turned into some sort of snake creature was creepy. The ending was similar to the feeling after seeing Freaks.

Here are a few more examples from the past. The most horrific transformation of a victim in 2000 came from Japan. The Audition, which was a movie that was mostly whispered about, lest anyone would think that you would, is the grossest movie I’ve ever seen to date. The person transforming men into bag people was a petite, quiet young woman. I plan to go back and trying to finish watching it, but I have an issue with seeing needles on film. Yes, tough me, who watches some really scary movies, can’t stand seeing a needle put into someone’s skin. Go figure. The brutal transformation caused a lot of talk about what should or should not be on a screen. This didn’t just give me goosebumps. It made me nauseous. This movie definitely stays with me, even now.

In Oculus, a woman was transformed to broken teeth, collar and chained in her bedroom. The husband was under the influence of an evil mirror. She became the equivalent of a mad dog. That was disturbing, but hopefully no kids saw the changed mom, who is normally a safe figure in movies.

Next, I give you Tusk, a horror-comedy movie that was, for me, more disturbing than The Audition. The reason it is so horrific is that you see the transformation in your face. You see the victim and hear the rational from the protagonist. In the end, there was only one humane answer for the victim. The most disturbing ending stays with me. The transformation was astounding and by not having a bearable result, it made me frustrated, sad and it’s just weird. It lingers still.

So, we have seen that horror movies, where the transformation is physical or cerebral, can have a real disturbing effect on you days or even years later. How we process a horror movie tells a lot about us.

We have several movies coming up in the near future that might show you this transformational effect. First of these is The Possession of Hannah Grace. There is usually a physical change in people who are possessed. The trailer looks like you will have to stay on your toes to see what she is doing. The trailer shows that movement has been so common in recent movies, like Overlord. I have never seen a possession movie that didn’t have a scary demon inside a body that didn’t change, but I will leave it up to you to decide for yourself.

Suspiria is a remake, hopefully making the story better. This is an Italian movie remake of a 1977 movie. I don’t see that much change in this, but hey, give it a try. I heard they like to use lots of blood, so maybe that will be a good thing.

Next is Slice. This is touted as a B-movie quasi comedy-horror movie. I will probably watch it because Chance the Rapper is in the movie. Sometimes, those B-movies are better that big blockbusters. Remember The Blair Witch? You never know.

Lastly, there is a horror movie called Hereditary. Toni Collette is in this movie, which makes me think it will be an unexpected gem. She has won an award already for this film, so I am already looking to find time to see it on the big screen. The trailer looked very intense and the creepy child is a nice touch. This movie has a lot of potential. I’m not sure if there is any transformation in it, but I hope so.

If you have a good imagination, there will be one or two movies that linger long after they have finished. These type of movies stick with you, staying alive through your memory of them. I see a lot of movies and the ones that make you uncomfortable are like that. So, through the process of watching these films that include a transformation, we also transform ourselves in ways that are good and bad. One thing is for sure: these movies can stick with us. Sometimes these changes are for the good or bad. I pride myself for being able to watch scary movies without actually being scared, but  some movies linger, like stink after a tennis match. Some get under your skin and haunt you for years. Do you have a horror movie that haunts you?  Sure you do. Don’t we all?