Per Matt
This week, MTAC 16-Bit returns to Middle Tennessee celebrating and educating the public about Japanese animation, media and popular arts, but none of that would be possible without the efforts of the convention’s Production Services team. Heading up the crew who designs the con from the ground up (literally) is JT Kesterson. From Friday, March 25th to Sunday the 27th, you can find out what he and his team have been building and planning!

Previewing the convention, Mr. Kesterson gives a behind-the-scenes glimpse of what it takes to create the popular convention, along with a practical joke that embodies his experience working the event.

In your own words, how would you describe MTAC to a first-time attendee?
– “Middle Tennessee Anime Convention is committed to providing a quality live experience to fans of anime, manga and Japanese culture to the residents of the Southeast. Each year is unique and as colorful as the world around us.”

As the Director of Production Services (Technical Operations), please tell me some of your roles and responsibilities at MTAC.
– “As the director, there are many stages and departments behind Production Services. Prior to MTAC, I oversee the creative development behind our main stage experience. From that point, I contract with vendors to provide the needed equipment for panel rooms and the main event areas. We also develop the floorplans and layouts we use in the hotel, including the dealer rooms. We recruit volunteers who are interested in audio, lighting and video production, and give them a feel for running a live event over the course of four days.”

“During the convention, my duties include scheduling the Load-In of the production gear, the setup of the MTAC staff radio and repeaters, the vendor and stage hands setting up the Main Events room, as well as the setup of each of the panel rooms and video rooms. Pro Serv supports the panelists during the course of the convention with resolving any technical issues, and we support the Programming and Loss Prevention Departments when they need extra staff and volunteers. As MTAC winds down on Sunday, I schedule and direct the Pro Serv team to the teardown of the panel rooms, and the Load-Out of the convention, and production gear.”

How many people are included in your MTAC team?
– “As of MTAC 16-Bit, I have eight staffers and 16 volunteers, and we are always looking for enthusiastic, driven talent.” 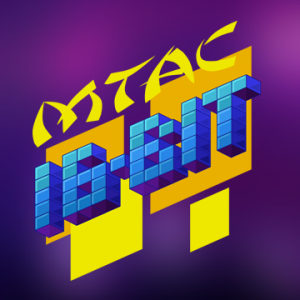 What’s a couple of things people may not know about your MTAC position?
– “The number of hours that the staff put into MTAC. We spend the better part of two to three years producing an event before we ever see the products of our labor. I rarely eat during the convention, much to the dismay of my staff and often suffer their displeasure by being forced to eat in public (more to come on this later).”

How many years have you been volunteering/working at MTAC?
– “Unofficially, in 2010, I helped one of my friends who worked in the digital game room and running karaoke during the weekend. Officially, in 2011 I volunteered and the directors at the time brought me on as staff for GMX Vol.3 later that year.”

What are you most looking forward to, at this year’s MTAC?
– “The smiles on the attendees faces. The varied and talented costumes and cosplayers who come to show off their hard work. The wearied, satisfied smiles on the staff we support. The camaraderie of my team, as each problem is met with a quick and efficient resolution. In all, a successful show.”

Do you have an amusing behind-the-scenes story that can sum up your experience at MTAC?
– “Last year, I was invited to present a panel for the first time called, ‘MTAC Staff: AMA (Ask Me Anything).’ I arranged my schedule and organized my staff and volunteers to cover the halls and main events room, during this time, to free myself up, but failed to eat dinner (again) before the start of the panel. A few minutes into the panel, the door opens and someone wearing a colored bandana, along with a black and gold ornate mask enters the room carrying a silver tray, with my sandwich layout on it. He proceeded to walk to the front of the room, bowed, and placed the tray on the table before me, bowed again, backed away, and turned to leave the room. This repeated with a new person every few minutes, wearing the same colored bandana, the same black and gold mask, carrying a portion of the dinner I had failed to eat, bowing, serving me, bowing again, and backing away to exit the room.”

“With each new delivery, the staff on the panel and the attendees grew more and more confused to what was happening, that the question was finally asked: What was going on? Was I directing them to bring in food? No, my phone was clearly on the table, and there had been no communication with my staff. Was this a rite of passage? No, I would never have allowed something like that. Then what had just happened? Another director quips from the other end of the table, ‘You’re missing the obvious answer. This is how they always treat him.’ I found out after the panel that my dispatch manager had put them up to it and it took wings.”

“And that is how I learned to eat my dinner on time at a convention.”

How many hours, would you estimate, are put into pre-show and post-con production?
– “Individually? Several hundred. For the directors? 10,000 hours plus. For the whole staff? 100,000 hours or more.”

“Myself, this year? Easily 500. And I’m not done yet. As a volunteer, I racked up 72 hours DURING the convention at my first MTAC.” 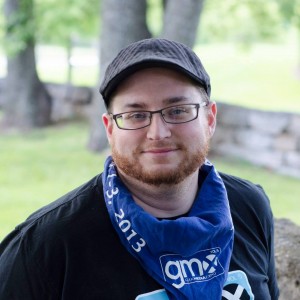 You’re always wearing a colorful bandana at the con. What do these signify?
– “The bright-colored bandanas represent the Pro Serv Krewe. First, the history and reasoning:

“When I first took a staff position with MTAC, I noticed that many and most volunteers never seem to return to work another event. This bothered me, since the majority of Tech Ops relies on people who are talented and very good at solving problems quickly. Out of the first four cons, only two of the same people returned. So, I looked at other events and conventions and adapted ideas. For GMX Volume 4, I set aside my own funds and printed out a small number of bandanas for my volunteers and staff. The idea exploded and I was asked repeatedly for a bandana, but alas the only way to earn a bandana was to work for Tech Ops. From then to now, I have a volunteer and staff retention rate of 80 percent. I would say that was a vast improvement from the past.”

“So, with one decision, I had a recruiting tool, a custom-unique keepsake, the means to bond and bring my team together, a way to find each other in a crowd, the means to be easily identified by hotel staff, con staff and attendees, and a very high demand for a very limited production run.”

“Any con-goer can identify a Pro Serv Krewe member and can ask them for help. We are there to support the con and we want people to find us as quickly as possible. It also means that we are on our best behavior. You know who we are.”

What bandana color will we be wearing at MTAC?
– “Ah, I guess you will just have to come by and find out.”

Is there anything else you’d like to add?
– “I hope everyone can make it to MTAC this year! And if you can’t, come join us for Geek Media Expo from October 28th to the 30th! Watch GeekMediaExpo.com for updates on our fall convention.