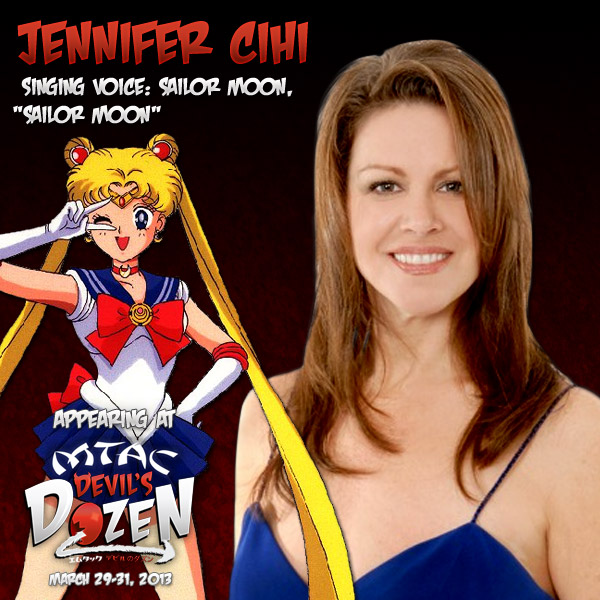 Jennifer Cihi has an accomplished musical career. She performed on Broadway at age 10, was featured on Nickelodeon’s Roundhouse and has sung jingles for Barbie and Hot Pockets commercials, but many recognize Jennifer Cihi for her vocal talents on the anime, Sailor Moon. Miss Cihi visited with us for an interview at the 2013 Middle Tennessee Anime Convention.

Is this really your first convention to attend?
– “I lived in LA for a million years and did Roundhouse, Hot Pockets, Barbie and did all kinds of voices for DIC Entertainment. I was doing a lot of live singing. I didn’t even know the whole anime world existed, because I didn’t know anybody who was into it. So, I was in this band, Skyline Drive, for 10 years. They’re local to Nashville. We do tons of corporate deals and weddings. Our Sound Man knows Chris Hamby very well, who is on the board of MTAC and GMX. He proceeds to tell me about this whole anime situation. I thought, ‘Wow. It’s quite fascinating that there’s such a big market that people still enjoy Sailor Moon.’ So, I got connected to go to GMX, that was five months ago. I went to that, eyes wide open. This is like Trekkie convention, anime style… on steroids. I thought this would be something fun that I could get involved with and reignite my Sailor Moon-ness. It would have been fun doing this the last 10 years. I would have enjoyed it.”

How did you get involved with GMX and MTAC?
– “I started talked with Holly Moore, and MTAC invited me to come. We did a big show, with a live band, and I sang all the hits of Sailor Moon. It was about a 30 minute concert. People were surprised. I really thought it out. If I’m going to do this, I’m going to go for it and give the best that I can give, being a singer my whole life. So, it turned out quite good. I did a Q&A yesterday and it really touched me. I could tell Sailor Moon touched these people who were kids when Sailor Moon was in its heyday. It was just a hired job for me. I did my part and I didn’t really know much more about it. They taught me things about Sailor Moon. That was encouraging. It was cool to see my voice helped to touch other people and encourage other people in life, because that’s what I’ve always wanted to do. A lot of people don’t tell you that. With this format, you get the personal touch.”

You also released a CD covering hit songs by The Beatles.
– “That was my third CD. I did about five songs on that CD.”

You didn’t sing the songs in Japanese, did you?
– “I lived in Japan for two years, so I could have, actually. They wanted to hire legitimate Japanese artists for that. I lived in Japan from ’86 to ’88. Sailor Moon wasn’t even out then. I saw the animation there, because animation’s big there. It didn’t come to life in America — from what I’ve seen — till the ’90s.”

You also performed on the City Hunter soundtrack.
– “It was only famous in Japanese. I met a really big producer in Japan. I worked at Tokyo Disneyland. It was the fifth anniversary and I was in a band there. Somehow, I got referred to this guy, and he paid cash to do demos. So, he said, ‘I have this thing, called City Hunter.’ I didn’t know what it was. It ended up being a really big thing there. That was an anime movie. I did the theme song. When I look back at those recordings, I think, ‘Wow. I’ve really grown as a singer.'”

When did you know you wanted to become a singer?
– “My Sister was in a children’s musical theater group in San Jose, and when I saw my sister in Annie Get Your Gun in 1970, I looked at my Mom and said, ‘I want to do that.’ I was kind of born to do it. I actually had a good voice back then. I started taking voice lessons. I knew from a very young age that singing was my thing. In life, some people know at a young age, this is my passion.”

Were you ever performing in any competition shows at an early age?
– “I auditioned for Star Search five times and they kept calling me back, but it wasn’t the right time or the right look. A lot of big artists were on Star Search — that was our American Idol — back in the ’80s and early ’90s. I just didn’t get on it. You didn’t get the kind of fame that you get now, on American Idol.”

Do you have any secrets to share from the Sailor Moon recordings?
– “Oddly enough, they just hired me for a few months to do the songs, and then I was done. They didn’t know how big it was going to be. When you’re a singer in LA, your agent sends you out on calls. Sometimes things take off and become a big project. It was like the Hot Pockets jingle. I did that one day and then 20 years it ran… It just goes to show you how some really big projects start from very humble beginnings.”

I’m guessing you’ve heard about the Sailor Moon remake?
– “I’ve heard about that. Someone asked me if they’d contacted me about that, but I don’t think they know where I’m at. They don’t even know how to get ahold of me. Would they be interested in having the original Sailor Moon? They may want someone young and fresh or a celebrity.”

You’re currently performing with your band, in Nashville.
– “Skyline Drive and the Pat Patrick Band, which has been around for 40 years. We performed at the Swan Ball and all the big charity events here. I still do quite a bit of studio work.”

If you had to choose one, what is your favorite horror movie?
– “Did you see The Call? It freaked me out! It’s like Hannibal Lecter in a car. I had to walk out, midway in, because I was so nervous. They did the chase scene so well, that I couldn’t watch it. And I used to watch The Exorcist and all those crazy shows. I think I get a little bit more scared, now. I don’t really like to watch negative, scary things any more. I’m trying to be more positive, in life… but I do like a good horror flick.”