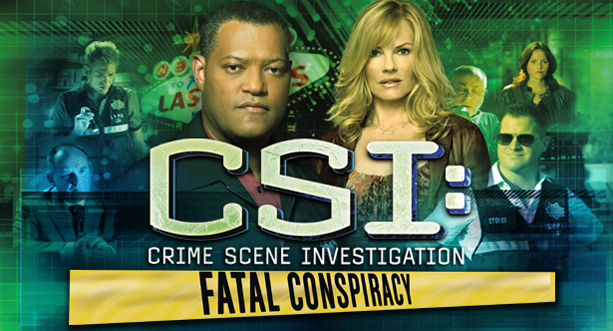 What happens when a tried-but-true, point-and-click adventure releases its ninth game based on the popular Crime Scene Investigation TV series?

The answer, of course, is CSI: Fatal Conspiracy. As a fan of CSI: Crime Scene Investigation, playing this videogame was a nobrainer. Fatal Conspiracy was released in conjunction with the Season Ten of the CBS TV show and features Lawrence Fishburn from that season. It is the ninth overall Telltale Games release based on the CBS TV series.

Each of the five cases within this game follow one of the main characters of the show. Sara Sidle, Greg Sanders, Nick Stokes, Catherine Willows and Dr. Raymond Langston make appearances and some of the actors reprise their respective roles as voice-over actors.

As the third game based on the TV show to be released on the XBOX 360, Telltale games has neither updated its already-antiquated graphics or changed anything, really, from the previous games. One of the worst offenses of Fatal Conspiracy is the basic character model. While they somewhat resemble the respective actors, the character’s lips barely move with spoken words of dialog. And even though it was originally released in 2010, this game is so old, the player uses a PDA device to sort through evidence. It’s been so long since I even saw one of these personal digital assistants — let alone use one — I had to actually look up the term, “PDA,” in an online dictionary, since I couldn’t remember what its abbreviation. Now, that’s Old School!

Each case begins with an odd opening scene — unlike the show, which usually begins with a person suffering from an unusual death. Instead, each of these five cases simply begins with two characters discussing a recent death, usually a CSI interacting with Captain Jim Brass.

For the most part, fans of the CSI franchise have grown accustomed to supbar videogame experiences. That trend sadly continues with Fatal Conspiracy. Although TV writers actually wrote the storylines for this game, the gameplay feels hurried, as if the developers quickly cranked the game out, based on the previous games’ models. Just a few of the unfortunate aspects of the game include an endless stream of unskippable cutscenes, semi-difficult minigames, redundant tasks, bad animation and bad graphics.

Subsequently, after developing CSI: Fatal Conspiracy, Telltale Games released the companion videogame, NCIS, based off this point-and-click model. Their most recent release, The Walking Dead, feels more organic than all the rest. Fatal Conspiracy is an easy completion and only recommended for the Achievement Hunter or Achievement Whore.