Murder is Fowl in Flesh & Blood 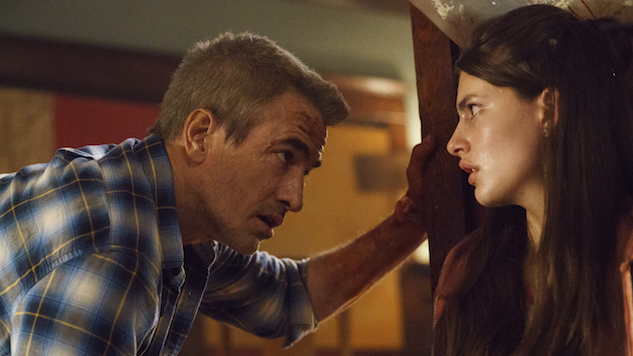 Into The Dark -- "Flesh & Blood" -- Kimberly (Diana Silvers), has not left the house since her mother’s murder, which remains unsolved. She begins to suspect that she's in danger and that it’s always the ones you love that hurt you the most. Henry (Dermot Mulroney) is also shown. (Photo by: Aaron Epstein/Hulu)

Hulu has a new horror anthology series that looks to turn each holiday into a horror-themed nightmare. Developed by Blumhouse, each month gets a new full-length horror film featuring different actors that is based on the upcoming holiday. The second episode of Into the Dark, “Flesh & Blood,” attempts to put a dark twist on Thanksgiving. That’s why it’s really unfortunate that I felt like I was watching a poorly made Lifetime movie instead of a horror film. In the loosely Thanksgiving-based film, director Patrick Lussier and writer Louis Ackerman took a used-up idea and gave viewers a predictable ending.

Kimberly (Diana Silvers) suffers from agoraphobia and hasn’t left the house since her mother’s still-unsolved murder. She lives with her dad, Henry (Dermot Mulroney), who gives her a birthday present that looks suspiciously similar to the necklace worn by a missing girl Kimberly saw on the news. Henry is involved in numerous home-improvement projects and gets advice from Kimberly’s therapist that she is not making adequate progress for a return to society. Tension mounts between father and daughter, as Kim begins to suspect that her father is a serial killer and is possibly responsible for her mother’s death. However, flashbacks are used to show Kimberly’s confusion about her mother’s death and her father’s true intentions. Kimberly can’t leave her home, no matter what happens. Every attempt she makes to get out of the home leaves her passed out. This could have been a great suspenseful way to play out the film, but the movie doesn’t use what it has to its advantage.

The film does a sad job of leaving any question as to if Henry’s guilty or not. Perhaps there was supposed to be some question, but I’m not actually sure. The film isn’t so much about who did what as you would think and plays out more like an poorly attempted take on Hitchcock films like Rear Window. If the situation was more ambiguous, then perhaps the film could at least spark some tension there. The 2015 film, Intruders, took the idea of agoraphobia and spun it on its head. This film feels like a poor imitation, by comparison. You should feel fearful for Kimberly’s life or perhaps Henry’s at some point, but trust me, you won’t.

In addition, the film really has a problem with pacing. Quite honestly, I watched this movie with my fiance and he ended up popping in his headphones to listen to a podcast about halfway through. For a horror film, it was really short on atmosphere, action or gore. It’s not that these things never appear in the film, but they certainly don’t happen enough. As I stated earlier, it really had the feel of a Lifetime movie. The movie was more dramatic thriller than horror film. The action was nothing spectacular, again, it was right along the lines of a low-budget family drama.

Flesh & Blood is a big miss in my book. I give it two stars. It’s watchable, but not exciting or original. So far, Hulu’s Into the Dark anthology series is batting zero with me, as I wasn’t particularly fond of the first installment, either. The next episode, “Pooka,” will have to really wow me to keep my interest in this series.