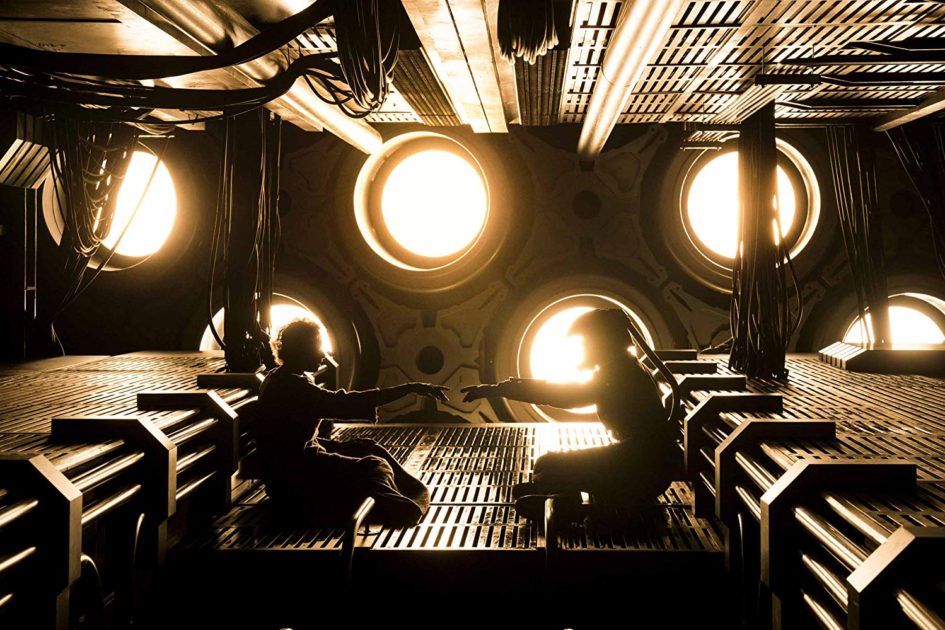 George R. R. Martin’s psychological thriller offers up a sci-fi and horror storyline that ventures outside Westeros and into outer space.

I was totally hooked after watching the series premiere, “All That We Left Behind,” which was basically a haunted house story aboard a starship. In the future, planet Earth is dying and a last-gasp attempt to make first contact with an alien species is taken by the Nightflyer colony ship and its crew. And if the extraterrestrials don’t speak English, then an unstable telepathic with killer psychic feedback may be humanity’s last-ditch effort for survival.

Claustrophobic at times, Nightflyers is full of a variety of characters. Every crew member seems to have a dark secret or two that will shape the storyline in some way. There’s the captain who likes his privacy, but prefers to address his crew as a projected image and may not really be human. The mutant, along with the first genetically engineered human to excel while living entirely in outer space, as well as the hacker who “jacks in” to the computer systems, much like William Gibson’s Neuromancer, long before the Wachowski’s Matrix trilogy, are all here.

The farther the crew travels into The Void — following the mysterious Volcryn — the more insanely erratic, mad and violent they get. It’s a little crazy and sometimes far-fetched, but it’s addictive. And that doesn’t even begin to explain the chaos that is explored (or at least attempted) via the cannibal cloners and cultists who live on a ghost ship, the corrupted memories apparently relived by the crew, the captain’s deceased mother who had her consciousness uploaded into the spaceship before dying (and the incest plot that is later revealed), killer germinating spores delivered via a newborn and a “living” space probe that experienced time travel of 1,000 years within a few days. Combined together, this series really reminds me of Event Horizon on multiple levels of madness in outer space.

Clocking in with only 10 episodes, each one premiering on consecutive days on Syfy, I was immediately interested in the ongoing story. I seem to be more willing to take a chance on limited series like this, that are quick to watch, so naturally, I binged six episodes one day to catch up and then followed up each day with another episode until my binging had concluded.

A corruption is definitely taking place and each of these characters seems to regularly breach the standard operating procedures while aboard the Nightflyer, which in some ways reduces any sympathy felt toward them.

As far as cautionary futuristic sci-fi tales go, this one is good, however it’s unforgiveable for the producers to have overlooked the basic process of live video chats, especially when they’re taking place instantly between someone from Earth and a person from outside the solar system. I mean, if I get a laggy Internet connection while living out in the country, it’s gotta be much worse from that far a distance. Then there’s the more bizarre story elements…

Unfortunately, by the last few episodes, the main character was the least interesting one of the bunch, while the more-developed ones were killed off too quickly or didn’t have much to do, making the finale feel like it fell flat, with a thud. The journey getting there was more interesting and fun than the actual ending. That’s madness, indeed.