On The Road: To The Memphis Comic and Fantasy Convention 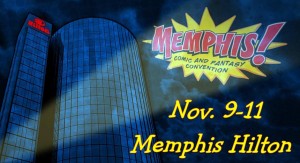 Really looking forward to getting my brother’s reports from The Memphis Comic and Fantasy Convention this weekend! While I don’t entirely know what to expect, I’m excited, nonetheless. This will probably be the final convention we attend this year, so we’re making a priority to get there and report everything right here!

What I do know: The Guest of Honor is Tom Kenny, legendary comedian/actor of numerous animated TV shows, movies and music videos! He works on a little show called Spongebob Squarepants as Patchy the Pirate, Spongebob’s voice actor and writer of songs used on the show! In addition to Mr. Kenny’s panels, is V Is For Villians dance party, lots of steampunk, an animation education presentation at a local middle school, Bricks and Heroes legos presentations and contests, Crossover Comics, Jerry the King Lawler, Order of Ty’r musical guest, Geek 101, paranormal investigator Larry Flaxman, and many, many more kinds of awesome. Can’t wait to post pictures, interviews and panel information from the entire weekend!