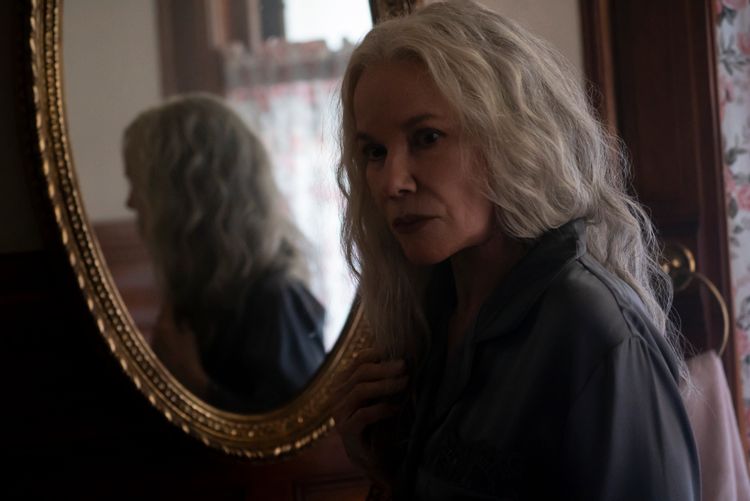 Per Matt
Death is but a stage in the circle of life. It’s only natural to be fearful about passing on during some point in your life. Making the most of your time alive should be more important than worrying about when you’ll be dying. This theme is somewhat adapted in The Manor, the final release in Welcome to the Blumhouse’s second season of horror anthology films, currently available on Amazon Prime Video.

After a ballet dancing instructor (played by Barbara Hershey) experiences a stroke, the family of Judith Albright admits her into an assisted-living facility. It takes some time to adjust to the change, which is hardest on Judith’s grandson, Josh (Nicholas Alexander), her best friend.

Judith seems to constantly fight against her protectors before her mental health begins to fade. Confusing nightmares with daydreams and reality, there’s rumors of a shadow creature that watches the residents at night, as well as creepy noises and things constantly getting misplaced. Honestly, I felt like I was losing my mind along with the residents while watching this movie.

While questioning if a pet cat can sense who’s about to die, Judith discovers she’s been marked and must find help before it’s too late. These characters have one foot in the grave, but none of them wants to be the next to die. Can the old people truly trust no one?

“If you’re gonna cheat death, you’ve got to pay the price…”

Self-described as a “gothic tale of terror with a modern twist,” The Manor combines supernatural story elements with black magic in a modern-day setting. I really liked the build-up in tension as our hero is constantly fighting against the odds (and everyone else) to stop this malevolent menace. There’s not a lot of jump scares, but there are a LOT of F-bombs (the most out of eight Welcome feature films).

Nursing homes have always been creepy to visit in real life. The scariest thing about these kind of places is the old-people smells — I’m only kind of kidding (thankfully Smell-o-vision wasn’t available). So, this storyline already had a lot going for it based on its location, alone. No one truly questions the mysterious deaths taking place there except our hero, which brings me to my next point.

The Manor easily has the best cast of actors out of eight Welcome to the Blumhouse films (so far). Barbara Hershey and Bruce Davison are terrific — I’ve been a fan of both actors for a long time and really enjoyed their performances.

Without truly knowing much about the storyline, I figured this was a movie I’d enjoy watching because of the acting, which was true. I managed to enjoy the storyline, as well. While I wasn’t really a fan of the finale, I kept expecting a major twist to eventually arrive, but that never happened. I did like the supernatural spin, though.

As I mentioned in previous reviews, Blumhouse really upped their game in terms of quality for the Season 2 releases of Bingo Hell, Black as Night, Madres and The Manor. Give them a shot during the spooky season!