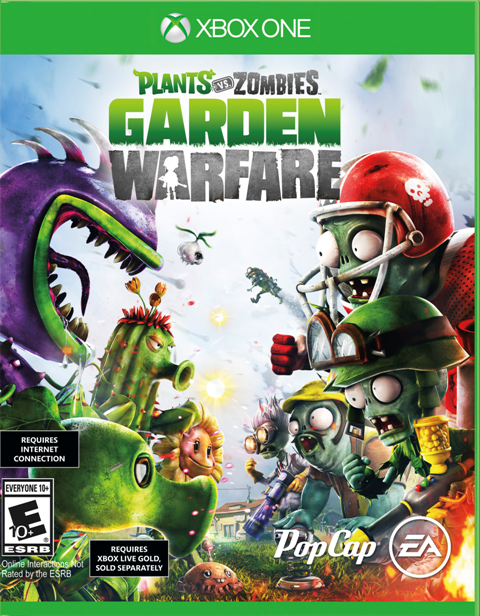 Per Matt
Move over, Call of Duty. There’s a new king of modern (backyard) warfare.

With Plants vs. Zombies: Garden Warfare, PopCap Games has molded the PvZ franchise into a true third-person shooter, with lots of weapons at its disposal. No longer a tower-defense game, the characters are now mobile… and each side is armed to the teeth.

No longer a casual game, Garden Warfare requires a bit of strategy in your gameplay. Whether you’re new to the PvZ franchise or a veteran at FPS shooters, one of the many gametypes will fit your playing style:

– Welcome Mat is a slimmed-down version of the game, intended for beginners
– Garden Ops lets up to four players fight the Zombies as a team
– Team Vanquish is a pure multiplayer mode, aiming for the most kills
– Gardens And Graveyards is a team-based capture the flag type of game
– Split Screen and Boss Mode are two XBOX One exclusive gametypes for local players to share the PvZ battleground experience

Crazy Dave is back, and this time, he’s brought character stickers. Once you complete additional objectives in the game, the player earns coins to buy sticker packs in order to upgrade your troops and arsenal. But this time, there is no store available for purchases. Garden Warfare adds the randomness element to the scenario that card-game collectors know all too well. With the sticker system, you can unlock new characters, new costumes and new weapons, but they’re all bundled together and separated by price. That means you could get a lot of common cards, once in a while an uncommon, a few rares and possibly even a super rare or two! Once you unlock them, new playable characters are unlocked.

In addition to all the upgrades, each character has three unique abilities, which vary from offensive or defensive procedures and even special attacks. As you progress through the game, your character will level up (much like a RPG) and eventually unlock these traits. I spent the majority of one day playing non-stop games because they’re incredibly addictive and no two games are ever the same.

A strong piece of advice to anyone interested in playing Garden Warfare: Level up your characters by playing easy modes BEFORE jumping into multiplayer matches with weak weapons. I learned the hard way!

Once you start unlocking different items, you can even use spawnable plants (or spawnable Zombies, depending on your side) as an effective weapon, but the most important battleplan is to always keep your eyes open. Since this is a multiplayer game, your comrades will eventually fall in the line of duty. That means reviving teammates isn’t a luxury, but a necessity. Good teammates win the battle, soldier!

One of the underappreciated qualities of the original PvZ was the music, which was great. Somehow, it’s even better this time around. My only gripe about Garden Warfare is its online-only gameplay. This worries me since I’m at the mercy of finding a game when other players are online (and have a good connection). It also worries me that EA continually shuts down online servers from older videogames. So, that means if you’re a PopCap fanboy (or fangirl), you might want to play Garden Warfare ASAP… because in the future, it may not be available forever. As a big fan of single-player FPS campaigns, playing a multiplayer online-only game took a little bit of time to get used to. But I enjoyed it every step of the way.

Make sure your XBOX Live Gold is paid up or you won’t be able to play this one. Don’t let the Zombies win! Fight the good fight with Plants vs. Zombies: Garden Warfare.