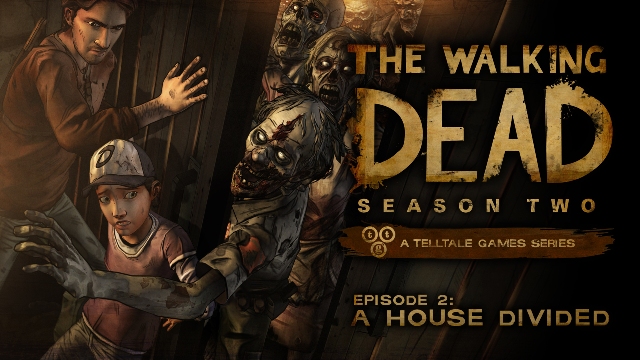 Per Matt
Oh my darling, Clementine.

You’ve gone through so much drama throughout the first season of Telltale Games’ The Walking Dead. For a young girl to have lost practically everyone she loves, she’s witnessed the arrival of the Zombie Apocalypse and hasn’t had much to be happy about… other than surviving. In Season Two, Clem has grown a little (literally and figuratively) and she’s learned a thing or two about staying alive. As Episode 2: A House Divided opens, Clem has made friends with her previous captors before a walker attack separates her from her friends — yet again. She never seems to get any lucky breaks.

While each game is based on the player’s past decisions, it’s most likely that you will play a different game than somebody else. Luckily, there are many choices to make in this episode.

For me, the game begins when Pete is bitten. Clementine babysits Sarah in an abandoned cabin, while the others are rounded up via a search party in the surrounding woods. A mysterious stranger arrives, knowing quite a bit of background information about Clem’s new friends and isn’t sharing with her. Later, when she confronts the group, Clem deducts they were past acquaintances and they’re currently fleeing from him.

After five days on the road, the group discovers a ski lodge and makes nice with its current inhabitants, one of which happens to know Clem: Kenny! It’s great to have a familiar face to cheer (or jeer) from Season One. The interaction between the two is subdued at first, leading up to happiness or uneasiness, depending on your choices. We predicted Kenny would return long ago, but before the player can start to enjoy his feistiness, another obstacle arrives. This concludes the second episode.

The main themes of this episode center around trust and the importance of family, both of which are important during the Zombie Apocalypse. Although these themes are obviously highlighted via Clementine, they can also be found via the secondary characters. Speaking of characters, Nick is unstable, drunk and suicidal… the perfect traveling companion. Not only does he cause a lot of the drama of Episode 2, but he may just get to redeem himself as the savior of the next episode. The episode ends with a compelling cliffhanger, as different groups of people cause plenty of tension.

As a player, I can understand why Clem gets to do all the main actions throughout the game, but as a person, I don’t understand how the adults of the group can sit back and let a little girl take all the dangerous risks without taking any action themselves. There seem to be far fewer Quick Time Events in this episode than those found in the first season and more opportunities to make one choice, instead of getting a chance to eventually select all of the listed options. That’s not a bad thing. It actually makes gameplay feel more fluid and greatly encourages its replay value.

All of the achievements are story based achievements; none are missable. By introducing so many different characters, Episode 2 clearly sets up the storyline for the rest of the season. While controlling Clem, sometimes there’s a sense of helplessness as major actions are necessary at some points in the game to move the storyline along and she can’t make a difference. I prefer to control all overall storyline decisions, but that’s neither here nor there.

I hope to learn a little more about Clementine’s parents in the Episode 3: In Harm’s Way. There was plenty of foreshadowing about them in this episode. I assume Clem is basis for the canned goods logo. It’s totally possible her parents owned the company and she’s the heir. I’m hoping that’s the case, at least.

Season Two of The Walking Dead continues in five separate episodes. Each episode is just $4.99 USD or equivalent purchased individually as digital downloads or even less as part of a season pass on Xbox 360, PlayStation 3 or on the iOS App Store.