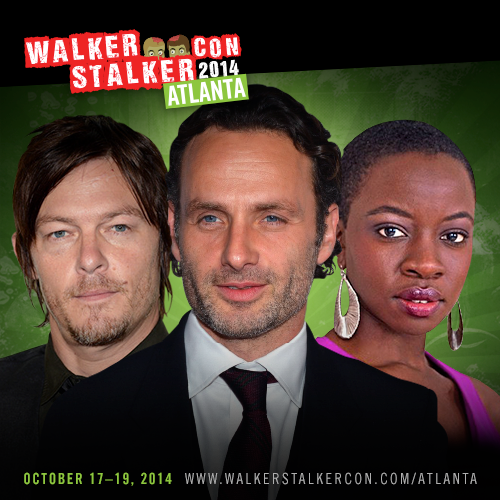 Per Matt
With Halloween on the horizon and The Walking Dead returning to television, Zombies of all types take the center stage.

Happening on October 17th to 19th, Walker Stalker Con is a fan convention in Atlanta that will be featuring Zombies, horror and science-fiction subject matter. There will be many different monsters in attendance, including those of Zombies In My Blog!

Looking ahead to an undead weekend, we interviewed Walker Stalker Con Media Relations Michael “Gooth” Guthas to preview the event.

How did the show get started?
– “Walker Stalker Con is the fruit of The Walker Stalkers Podcast with James and Eric. The podcast began with an amazing trip to Senoia, GA where James and Eric were able to view the set of The Walking Dead and meet the incredible actors from the show. As a result of this experience, a podcast began and then the idea of a convention focused around recreating that same experience with the cast and crew of the show, along with talented actors and artists from other Zombie shows, movies and art.”

Did the show have a previous relationship with Skybound or AMC?
– “No.”

What are some non-Zombie-related topics that will be featured?
– “IronE Singleton will perform his one-man show, ‘Blindsided by The Walking Dead,’ Emily Kinney will perform a concert. We will have guests from The Vampire Diaries.”

“‘Blindsided by the Walking Dead’ shows IronE’s transformation by sharply contrasting the trials and tribulations of his life growing up destitute living in a housing project in Atlanta during the onset of the hip-hop explosion and crack epidemic to his rise to fame in the Oscar nominated and biggest box-office grossing sports movie ever, The Blind Side and subsequent landing on The Walking Dead, the biggest show in cable television history.”

“This show offers a perspective on the psyche of a young man growing up in America. Overall, this show explores the human condition and offers a solution to the issues we all encounter as human beings.”

Actress Emily Kinney will be performing a concert. Can you tell me a little about it?
– “She is a professional singer and has an album out, Expired Love.”

Will anyone from AMC Studios be making any presentations or panels?
– “Gene Page who is an on-set photographer will be in attendance.”

Will Telltale Games, maker of The Walking Dead video games, have any representatives at the convention?
– “Yes, they will have booth. Also, a guest will be Melissa Hutchison who is the voice of Clementine on the game.”

Prepare us for the Zombie Bash Party. What can we expect?

Is there anything else you’d like to add?
– “Walker Stalker Con is not just a convention. It is a fan meet-up and an opportunity for each guest to come away feeling like they’ve had an amazing experience and became part of a greater community of Zombie lovers! Walker Stalker Con is three days of events, panels, and experiences that Zombie fans won’t find anywhere else!”