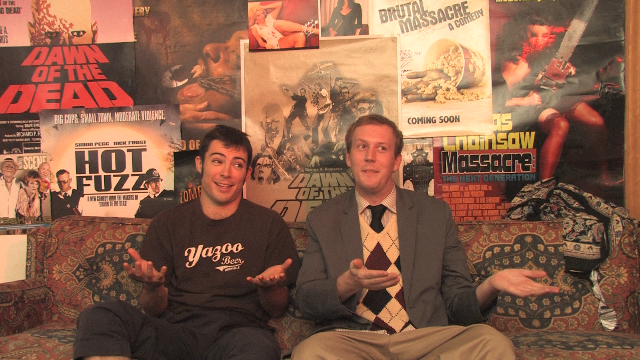 Per Matt
The Yazoo Brewing Company has teamed up with Something About Zombies to bring Monster Sundays to the Nashville brewery!

Two weeks ago, I spoke with co-hosts Matt Holton and Julian Chatham-Tombs to get more information about the TV show that features a variety of programming that isn’t solely focused on the undead, including cult-classic movies, commentary, comedy skits and celebrity interviews… as well as original Zombie movies filmed by the hosts!

How did you guys come up with the title, Something About Zombies?
– Matt: “Back, when we were in college, I just knew we wanted to make a TV show. I had no idea what we were going to do, we just knew that we had a network at the college and wanted to make something. I was trying to think about what I knew the most about — or just random knowledge — and the one thing I’ve been obsessed with, since I was 10, was Zombies and Zombie movies. Let’s make a show about Zombies, but it can’t only be about Zombies. Well, let’s make Something About Zombies.”

How long have you been working on the show?
– Matt: “We’ve been doing it for several years, now, in Nashville. We started it, actually, when we were still in college, on channel 10 in Murfreesboro, where we did about five seasons of the show. It’s sort of a hobby and a passion and a love for horror and Zombie movies and we just wanted to make a show out of it.”

Do you talk over the movies, like Mystery Science Theater 3000?
– Matt: “We have done that, on a couple of episodes. We even broke a movie down, play by play, on an intermission, like it was a sports game. Basically, that was the original idea. That’s kind of what we’re influenced by… not so much the scary horror hosts that have been around for years and years, but we’re going more toward the comical side of it.”

What was the first movie aired on TV?
– Julian: “We started off Monster Sundays with George Romero’s Night of the Living Dead. Originally, when we did our pilot for Something About Zombies in Murfreesboro on MTTV, it was George Romero’s Night of the Living Dead. We put up props behind us, did some skits and formed the show. We talked about some other horror movies, like Dead Alive, and it kind of went on from there.”

Are there any kinds of stipulations regarding the movies aired on your show?
– Matt: “Because we’re on cable access and not actually paying for licensing, all the movies are public domain. I think they have to be 35 years old, but the laws are always changing.”

How many total episodes do you think you’ve filmed?
– Julian: “We’re hitting 41 because we had a couple of best-of shows and then there was Lawn of the Dead, that was split into two, then we put them together, as one.”

– Matt: “Also, there were a couple of episodes that I had put together, back in Murfreesboro, that were deemed ‘unable to air.’ Technically, I still count those, although they didn’t want to air them.” 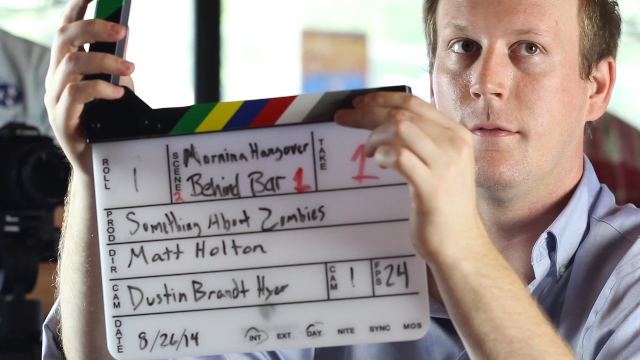 How often do you film the show?
– Matt: “It’s definitely an unscheduled format. It’s different from when we were both in college, because we were next-door neighbors and we could film stuff with the drop of a hat. Now, we both have kids and pretty much full-time jobs. I’ve recently started my own video-production company. This whole thing was more of a hobby, but now I’m making a living at it. It’s hard for us to get together and shoot on a regular basis. We’ll get together one day and shoot footage for three episodes and then it’s up to me to cut it and put it all together.”

“Yazoo is our main sponsor that’s been with us since the beginning, but we do have another loyal sponsor. It’s a local pub, Copacabana Bar and Grill, over in West Nashville. That’s where we shot our last Zombie movie.”

Your show also features celebrity interviews.
– Julian: “Our interviews are a big draw.”

– Matt: “In this new season, we have an interview with Scott Wilson, who’s Hershel, from The Walking Dead; Jamie Kennedy, who was in Scream and others.”

What kind of events do you guys attend to interview celebrities?
– Matt: “Mainly, I’d say 90 percent of it is through the Full Moon Horror and Tattoo convention that is put on by Ben Dixon, who owns Lone Wolf Tattoo and is putting together the new Slaughter House, here. Some of the other interviews we’ve been able to pull are through the Nashville Film Festival.”

What’s your favorite form of Zombie entertainment?
– Matt: “My favorite movie, hands down, is the 1978 original, George Romero’s Dawn of the Dead. A close second, behind that, would be Shaun of the Dead. As far as books go, World War Z, is definitely a really good one. The movie did not quite live up to it.”

– Julian: “I kind of like the goofy stuff. Dead Alive was a really good Zombie movie. It was really over the top, but goofy. When it comes to scary horror, I like George Romero’s Diary of the Dead. It was one of those self-shot movies and had some pretty good twists.”

“We went to Belcourt and actually filmed George Romero talking about that. I forget which episode it’s on, but he said the movies got too big for him. He likes the small stuff, where he can control more of the story. I think that’s what happened with Land of the Dead. And then Diary of the Dead was more retrospective. It was much better.” 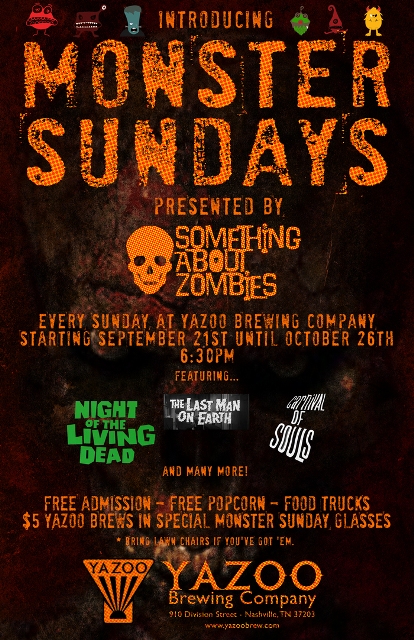 How did you guys bring Monster Sundays to Yazoo brewery?
– Matt: “When we got started with channel 9 in Nashville, somebody was on the board of directors had a boyfriend or a husband who worked for Yazoo. The station manager suggested that as a sponsor for the show. Eventually, through different meetings, we were able to get them to jump on board with us. They’ve been really helpful and supportive for us, the whole time.”

“We did two seasons, back to back, and then took almost a two-year hiatus. We hadn’t made a new episode in a long time, but the station had been showing reruns of our show. Eventually, they took it off the air, because it had been so long. But when they did that, fans were writing and calling into the station, so they brought it back to air, before we had even made anything new. That was definitely something that inspired us to make more episodes. When we were making the new season, we were in talks with Yazoo and wanted to do some live events. That’s where Monster Sundays was created.”