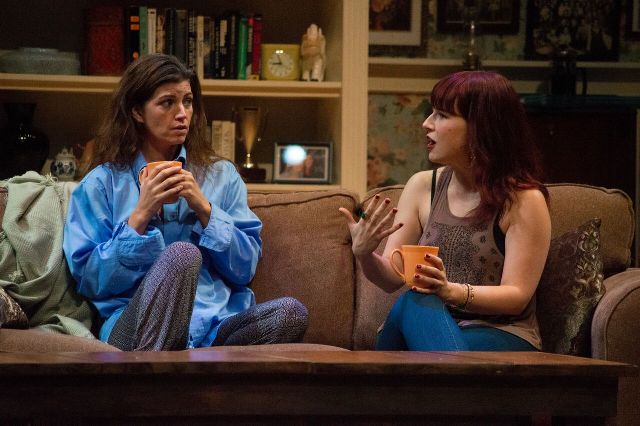 Per Matt
The road to happiness can be long and winding. It’s a difficult path, for some. As evidenced in Rapture, Blister, Burn, it can be both a bonding experience, as well as a fracturing one.

Appearing at the Andrew Johnson Theater in the Tennessee Performing Arts Center through September 19th, Nashville Repertory Theatre features author Gina Gionfriddo’s story of finding fulfillment and overcoming disappointment. It’s a shot of grrl power, as the females of three generations compare and contrast their views of feminism and the different routes they take to find their happily ever after. It can be difficult, it can be unpleasant, it can involve flawed relationships, but somehow, each one of them gets there in roundabout ways.

Former roommates Catherine (played by Shannon Hoppe) and Gwen (Cheryl White) reconnect after losing touch with each other for more than a decade. Previously, Catherine sacrificed her relationship with her former boyfriend, Don (David Ian Lee), in order to pursue a successful career, but she secretly longs to settle down and start a family. On the opposite spectrum, Gwen is perfectly content as a happy homemaker with that same fellow, but sometimes wonders what could have happened if she continued to pursue her acting career. This three-way friendship has no opportunity for success. What it does offer is a choose-your-own adventure route to switch your life’s path, which sounds good to imagine, but fails in real life.

Amanda Card’s Avery portrays the foul-mouthed twentysomething whose feminist ideals starkly contrast with the other women, but even she is surprised to have more in common with Ruth Cordell’s Alice, who is the more experienced of the group.

Written by a female playwright and guest directed by Lauren Shouse, this Pulitzer Prize-nominated play explores the never-ending pursuit of happiness that sometimes clashes with modern-day feminist goals. Can happiness be found as a homemaker? Does achieving a fulfilling life equal sacrificing meaningful relationships? Find out in Rapture, Blister, Burn. It’s a heavy topic that’s counterbalanced with some great comedy.

Pay careful attention: Do not miss the comparison of pornography to Google Maps. It’s a guide to hilarity.