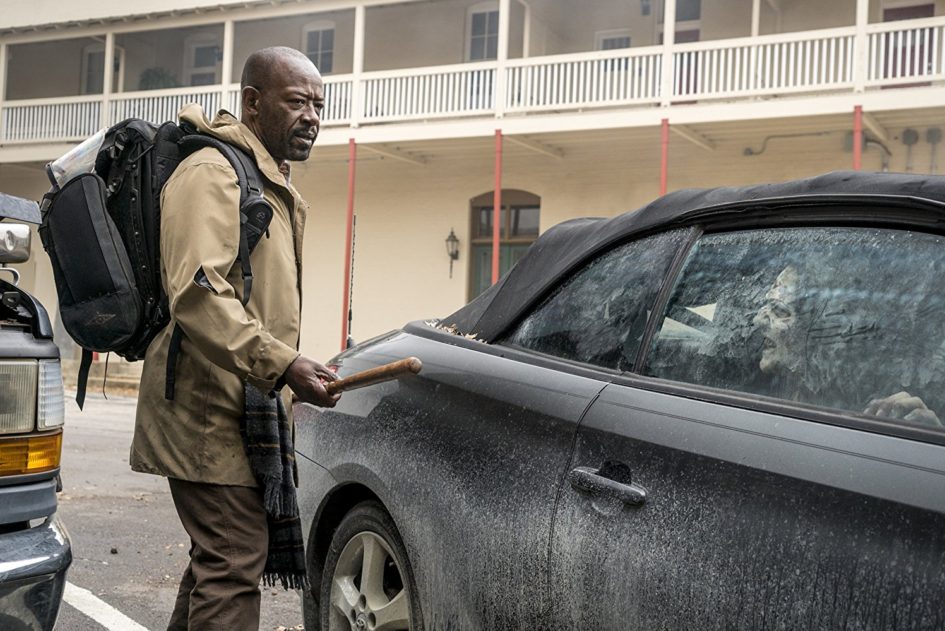 This week, Fear The Walking Dead ventures into a new territory. Just as the TV show was getting good last year, it was all blown away from the dam’s explosion, scattering characters (as well as the upcoming storyline) into different directions.

While Lennie James’ character initially made his appearance in TWD’s pilot, only to disappear for a few years before eventually reuniting with Rick’s Gang, the audience still doesn’t know too much about him. Haunted by the loss of his wife and child, Morgan was trained to become a peaceful warrior by a cheesemaker. As TWD winds down its Season 8, he has regressed from a mighty warrior to seeing ghosts (and interacting with them) of dead people. Will moving a well-known character from a popular franchise jump-start the younger spin-off series? I guess we’re about to find out.

The ratings for Fear‘s Season 3 were the worst yet for the TV show, clocking in as low as two million people watching per episode. So, will Fear remain a side story for the overall franchise, or will it actually move the overall narrative forward, now that a familiar face has joined the cast? It seems like an all-new show is about to begin with the season premiere episode, “What’s Your Story?”

New Showrunner Scott M. Gimple has now taken hold of the Fear reigns, while Ian Goldberg and Andrew Chambliss will be in charge of the show’s smaller details. After watching the season’s preview trailer, the filmmakers truly missed a golden opportunity of killing off all the previous main characters and starting anew. Now, it seems like a combination of new and old elements, which might slow down jumpstarting the year’s all-new storytelling process.

To be honest, all of my favorite characters on the show have either been killed off, forgotten or eventually diluted past the point of recognition. At one point, Victor Strand (played by Colman Domingo) was the most intriguing. Not anymore. High school student Tobias (Lincoln A. Castellanos) was probably the smartest, but his advice wasn’t heeded by Madison and he (hopefully) escaped the oncoming Zombie Apocalypse. Too bad he never made an impact. Patient Zero (Lexi Johnson) was somewhat noteworthy, although never really necessary. The doomsday preppers held so much promise… for a while. All of that leads up to Daniel Salazar (Ruben Blades). When he’s not going loco or getting burned alive, he is the best bet for being my favorite character. He knows what to do in order to survive and he can seemingly foreshadow oncoming dangers. Hopefully he will play a bigger role this season. If only the series would revolve around him instead of Madison and her family. That would definitely be a big improvement.

If an audience doesn’t return in record numbers to watch these new actors, this will most likely be the last stand for the show. That’s not a bad thing, but for an expensive show to continue past four seasons without knock-out ratings, the odds are greater that it’ll first die before turning undead.