Oh yeah, did I forget to mention that this wolf can fly?

Growing up, the highlight of my week used to be going with my dad to the arcade and playing video games all afternoon. I kicked butt on Galaga and Super Mario, but nothing could ever compare to Rampage. The premise of this pixelated classic is to become a giant monster and smash your way through cities, destroying vehicles and buildings for points while eating people to restore your health. For a kid who loved giant monsters and goofy animation, it was a dream come true.

In keeping with the 21st century trend of recycling old ideas to capitalize on nostalgia, Rampage ended up among the countless TV shows, books, video games and board games being brought to the big screen. After choking down my immediate nausea at the idea of another nostalgia flick hitting theaters, I decided I’d go into this as what it was meant to be: an adventure. As I sat down in the theater with my son, I knew we weren’t about to see any award-winning performances or genre-changing stories or effects. We were there to watch some giant monsters wreck up Chicago while The Rock tries to stop them. And just like that, I settled into my seat for the show. 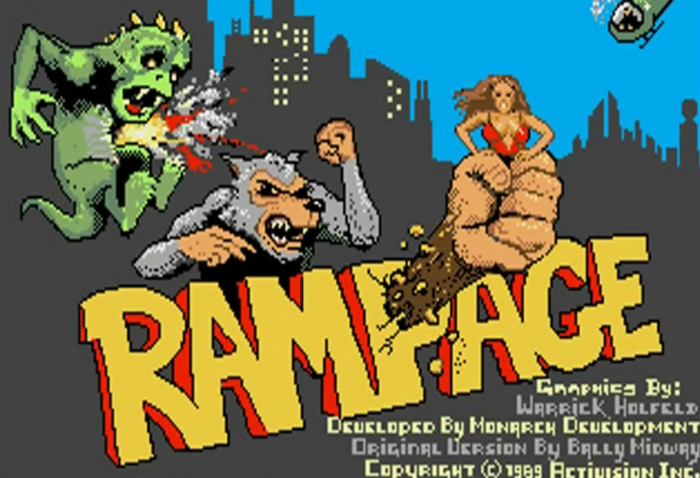 Rampage begins in a much darker, much more exciting tone than I would have expected from the previews as an evil corporation sacrifices human lives on a space station in order to retrieve their genetically engineered super chemicals capable of splicing seemingly random combinations of animal traits, while growing the subjects to an enormous size. The three surviving canisters of this formula crash to earth mutating a gator, wolf and an albino gorilla named George who is in a California zoo. Things quickly go sideways as the now gargantuan and mutated monsters are drawn by a signal to Chicago.

The Rock will forever be The Rock, not Dwayne Johnson. As well as playing Rampage in the local arcade, I used to watch this talented actor drop “The People’s Elbow” on unsuspecting wrestlers and ask audiences everywhere if we could smell what he was cooking. This was back in the day when WWE was still the WWF. Still, he’s an incredibly talented actor and extremely funny and genuine in every role he plays. In this case, a primatologist with vague Special Forces training, who is determined to help save his friend, George, from whatever has been done to him. Add in some fun performances by Naomie Harris, Malin Akerman, Joe Mangianello and an almost comically exaggerated Texas lawman played by Jeffrey Dean Morgan, it’s a cast that really seems to have had fun making this movie. 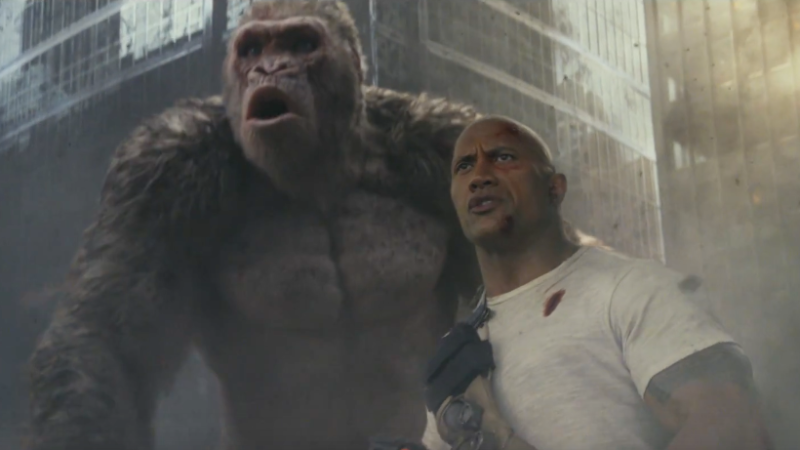 Oh, yeah. You can smell what Dwayne’s cookin’!

If you’re looking for something groundbreaking, boundary pushing or with the potential to turn the genre on its head, you’re going into this for the wrong reasons and you’re going to be disappointed. Rampage is a fun, sci-fi action comedy about giant animals tear-assing through a major metropolis. There are a ton of Easter eggs and nods to the old game and its numerous sequels throughout the movie and some of the scenes feel as if they’ve taken the pixelated levels and brought them vibrantly to life on screen. The movie literally starts with a bang and keeps the action coming at you pretty much nonstop until the end. The creatures are full-blown CGI which, as you know, I’m not a huge fan of, but given the fact that this is a huge budget pre-summer action flick, I really didn’t expect any practical effects.

Rampage blends ’80s arcade nostalgia with modern graphics and techniques, and some excellent storytelling for what becomes a truly entertaining experience. This is hands down the best giant monster movie you’re going to see in 2018.