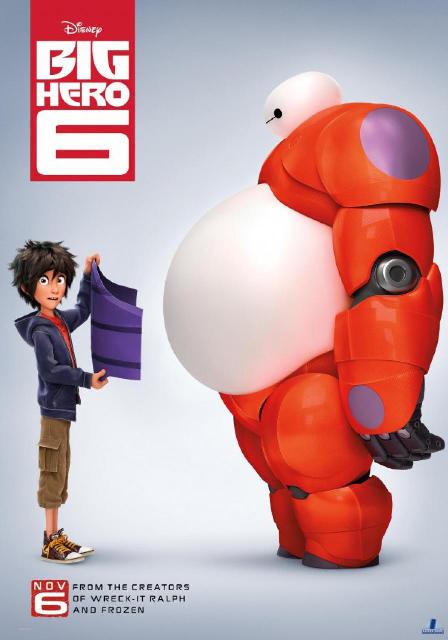 What happens when you pair a teenage boy with his best friend (that just happens to be a robot!) in a buddy-adventure movie that features geek technology and superhero shenanigans?

When Tadashi Hamada (voiced by Daniel Henney) slyly sways his younger brother away from the illegal and underground Bot Fights, Hiro (voiced by Ryan Potter) enters a science fair, in hopes of earning a scholarship to the San Fransokyo Institute of Technology. But when an unexpected explosion brings peril to Hiro, his new friends help him cope with his recent loss.

It is Baymax, Hiro’s personal healthcare companion, that doubles as his best friend. Voiced by Scott Adsit, the inflatable robotic nurse steals every scene its in, featuring funny, geeky and emotional ties with Hiro. By joining forces with his friends, Hiro and company upgrade their scientific inventions by forming the superhero group Big Hero 6 and battle the mysterious supervillain who wears a Kabuki mask, Yokai.

The movie’s setting is San Fransokyo, which is a futuristic mash-up of San Francisco and Tokyo and a background blast to enjoy, as the group attempts to unravel a mystery.

In order to adapt the storyline into a feature film, many changes were made from the original Big Hero 6 comic-book miniseries. Its origins are not fully overlooked, but incorporated into many different elements of the movie. And if you’re really observant, there are many, many hidden Easter Eggs scattered about the movie, calling references to Marvel, Disney and other pop-culture icons that practically necessitate one finger on the pause button at all times, in order to be seen.

Bonus features include a teaser trailer and the incredibly adorable theatrical short, Feast and Big Animator 6: The Characters Behind the Characters, which features a round-table discussion with the top animators.

Presented by the creators of Frozen and Wreck-It Ralph, Big Hero 6 is the first emotional and geeky-fun movie to involve a robot as a main character since The Iron Giant was released, way back in 1999. Both critics and audiences have agreed. The movie became the third highest-grossing non-Pixar animated film by grossing a worldwide estimated total of $652 million and won the 2015 Best Animated Feature Film Academy Award. It’s little wonder that a sequel is being strongly considered by Marvel.

How often can a movie be both futuristic and retro, simultaneously? How often can an adult connect to a Disney movie that’s aimed at children? What about a superhero movie that makes you get emotional? All of those combine to form Big Hero 6.

Notable Quotes:
– “Welcome to the Nerd Lab.”
– “Nothing is better than free food!”
– “Excuse me, while I let out some air.”
– “There are no red lights in a car chase!”
– “It’s like spooning a warm marshmallow.”
– “We can’t go against that guy. We’re nerds!”
– “Our origin story begins. We’re going to be superheroes!”
– “We didn’t set out to be superheroes, but sometimes life doesn’t go the way you plan it.”