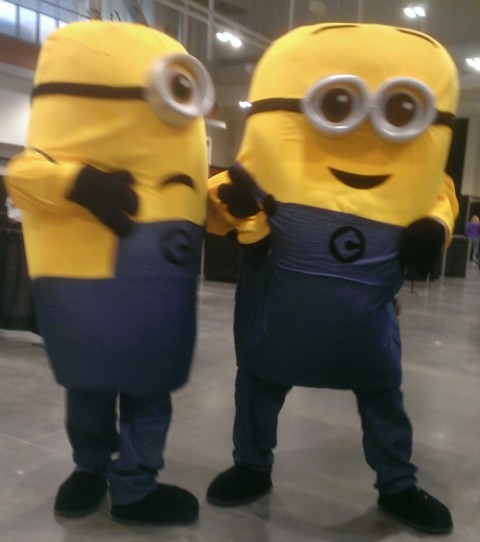 Despicable Me was a surprise-success story in 2010. How in the world could Universal top that movie?

You introduce a love interest, of course. Well, that, and a retired villain, itching to turn Gru into a bad guy, once again. In Despicable Me 2, Gru is still full of hate, though his adopted daughters have softened him quite a bit.

When an extra-large magnet “steals” a top-secret research lab in the Arctic Circle, former villain Gru is recruited as a secret agent for the Anti-Villain League, in order to save the world. Gru gets a partner, Agent Lucy Wilde, who’s instantly annoying and obviously his soon-to-be love interest. Agent Wilde tries way too hard to impress Gru (and the audience), but eventually, by the end credits, I warmed to her character.

Despicable Me 2 is a fun extension of the original movie and at times, it’s intolerably saccharine sweet (hopefully the next sequel has far fewer pastels). There’s plenty of great slow-motion sight gags that would’ve worked great with 3-D glasses — which I didn’t use. Animation seems to work much better with the technology than live-action films. Sprinkled throughout the film, the music is addictive (including great songs by Cee-Lo Green and the Pharrell Williams). In fact, it’s so good, Pharrell Williams is getting Oscar buzz for his work on the soundtrack.

As a secret agent, Gru is unreliable, but it’s those incredibly goofy, but oh-so cute Minions, who steal the show. Because of this, it’s impossible to dislike the characters (we’re featuring a photo of two Minion cosplayers who won the Nashville Wizard World costume contest grand prize). Soon, they will star in their very own spin-off, Minions, coming to movie theaters on July 10, 2015.

Strength: Great acting, awesome graphics and incredible music.
Weakness: At times, the storyline is a bit diluted.
WTF Moment: The highest honor of serving time with Gru is a 21 fart-gun salute.

Notable Quotes:
– “HA! Boobie!”
– “I miss being evil.”
– “Lisa’s got Gruddies!”
– “Gru’s back in the game.”
– “I really hate that chicken.”
– “Don’t you think there’s more to our future than jelly?”
– “You know, you really should announce your weapons after you fire them.”
– “I, too, have spent many nights, trying to drown my sorrows in guacamole.”
– “I’m happy to create an evil army to destroy the world, but nobody messes with my family.”