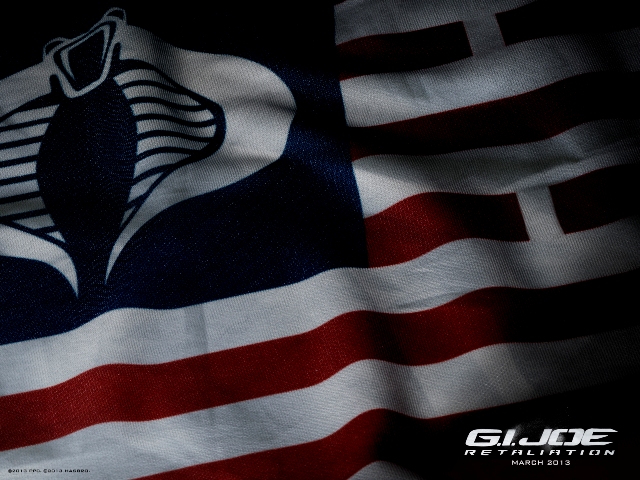 Per Matt
G.I. Joe: Retaliation is the second live-action adaptation of the Real American Hero franchise. How would we grade this film’s collectibility?

I just don’t get it. Why, oh why, has Hasbro allowed outsiders to destroy its most profitable toy franchises? First of all, Michael Bay destroys the Transformers Universe with mindless explosions, hurtful stereotypes, potty humor and robot-sized genitalia.

Then there’s Di Bonaventura Pictures’ G.I. Joe franchise, but in name only. The first movie (G.I. Joe: Rise of Cobra) was so bad, the majority of big-named actors either refused to return or their characters were killed off for the sequel, G.I. Joe: Retaliation.

If only a fanboy was in charge of supervising such a big-budget blockbuster, how the tides would have turned.

Instead, Retaliation begins with a covert mission in North Korea, which leads to another dramatic raid — this time by air and then another battle. In fact, through the movie’s opening 30 minutes there’s rare bits of plot that link each of the various battles together, whatsoever. Sadly, there is little storyline, whatsoever. Retaliation aims to be a mindless blockbuster. Instead, it’s just mindless drivel.

In a rare instance of similarity, Duke is killed early in the movie, much like what was supposed to take place in the original G.I. Joe animated movie. However, plans changed, after it was delayed and critical response to Hasbro’s other animated movie simultaneously released, Transformers: The Movie, when Optimus Prime was killed. Backlash resulted in a rewrite of the script, much like Retaliation, which Channing Tatum’s role was expanded before Duke’s death.

Director Jon M. Chu effectively writes off the majority of the main characters who fans cared about… and killed off the rest by movie’s end. There were few to start with and even fewer at its conclusion. In the end, Director Chu should stick with his day job: Either directing Justin Bieber or the Step Up movies, since he’s way out of his league with this snoozefest.

Bad acting, bad writing, bad directing and even bad publicity. Even Anthony Petrie gets it with this Retaliation poster, something much better than the “official” ones floating around. It’s obvious he’s a fan.

In this universe, apparently all soldiers train by parkour. The highlight of this film is Cobra Commander’s rise to power. He finally resembles the original character and he’s in charge… resulting in his character pushed into the background. Instead, the movie heavily focuses on Roadblock and Storm Shadow’s brief character arcs.

Random Fanboy Moments:
– Flint is missing his beret, Duke still isn’t blond.
– Both Storm Shadow and Firefly remove their masks way too often.
– Worst of all, RZA is a terrible actor. Who did he blackmail to get into this movie?
– Ninjas were the downfall of the Marvel comic and feel out of place in this Army-based Universe.
– I hated Jinx in the comics and this movie. Having a useless, minor background character was a waste of space (and script).
– General Joseph Colton was known as The Original G.I. Joe in the Marvel comics, briefly only making cameo appearances, unlike Bruce Willis’ character.

The original movie was pulled from theaters, supposedly for 3D effects, meanwhile the entire ending was reshot and released nine months later. Too bad it wasn’t totally reshot. So much is wrong with this movie, yet somehow it made a little movie. If only a fanboy had been in charge, it could’ve been a HUGE tentpole franchise, spawning spinoffs and more sequels. Unfortunately, this may be the last live-action G. I. Joe movie.

There’s no blood, no nudity and no curse words, yet still PG-13 for violence.