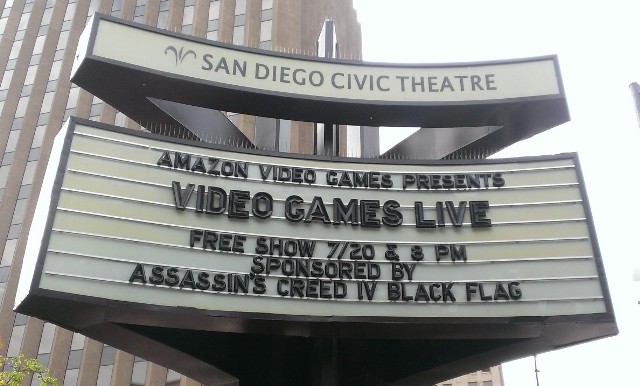 Per Matt
For my second viewing of Video Games Live, I went backstage for a quick interview with Grammy-nominated Composer Austin Wintory, sat in the VIP section for an up-close-and-personal view of the festivities and witnessed a number of world premier performances by the original video game composers!

One of the highlights of my San Diego Comic-Con 2013 trip was attending the free concert performance of Video Games Live. Amazon Games sponsored the event and of course it was a sold out show, with more than 3,000 people in attendance. In addition to everyone watching the interactive concert live and in person, the entire show was broadcast live via Twitch TV. The streaming show set a Guinness World Record for the MOST people to ever watch a live video game concert! Over 230,000 total people watched live.

Back at the San Diego Civic Theatre, I scored a VIP pass and before the show started, I was lucky enough to get a backstage interview with Composer Austin Wintory. I’d been unsuccessfully attempting to track him down for almost four months (since meeting him at ScoreCon) and we’ve been playing tag ever since. Afterward, my seat was in the second row of the orchestra pit — absolutely perfect!

There were plenty of other surprises in store, including more musical guests and a quick voice-over performance by actor David Hayter, who made an appearance via his Solid Snake character.

Creator-Producer-Host-Performer Tommy Tallarico promotes Video Games Live as an interactive live event, encouraging the crowd to be raucous and to take photos and videos to promote the event. He didn’t fail to rouse the crowd into a frenzy.

An added perk to the performance was the fan interaction. An online poll was created to let fans decide which songs to perform: themes from Beyond Good and Evil or Assassin’s Creed 2. The latter won and later in the concert, Tallarico decided to go off script and perform Beyond, because it’s his all-time favorite video game. I love these type of spur-of-the-moment decisions at live events, preventing them from being scripted (Tallarico admitted everyone backstage was frantically running around).

Amazon sponsored the event to be free to the public and donated giveaways, including several Kindles and many gift cards worth hundreds of dollars.

Tallarico seemed to be having as much (or more) fun than the crowd, and it showed. He was very enjoyable as the host, performer and ringleader of all his crazy musical friend.

During the Guitar Hero performance, attendee and competitor Max gloated a bit by performing Foo Fighters’ The Pretender song on Expert level and had to get 400,000 points to score a $1,000 Amazon giftcard and Kindle, when he only had to attempt it on Hard mode. For a while, he seemed to have made a mistake, having missed a few notes. The crowd continually cheered him on, regardless. But after reaching a 200-note streak and many bonuses, he barely made the target score and the crowd went wild. 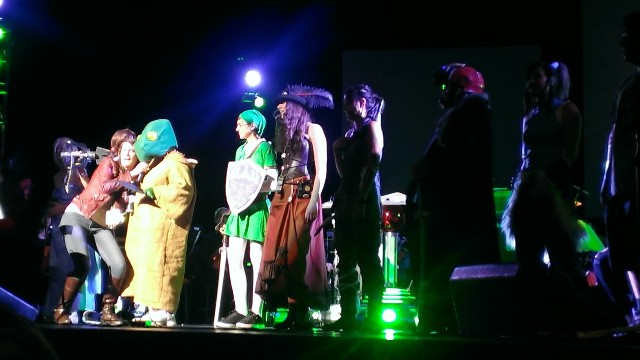 As for the cosplay contest, many great costumed characters made appearances, but it the silent-but-jubilant characters of Wintory’s Journey who were the big winners, and the crowd loved them.

I had a blast attending Video Games Live for the second time. If anybody gets a chance to ever attend one of the VGL performances, go out of your way to do so. You won’t be disappointed.

Thank you to Tommy Tallarico, Austin Wintory and Joel Guttman for creating an amazing experience for everyone in attendance! I can’t wait to attend the next VGL performance!