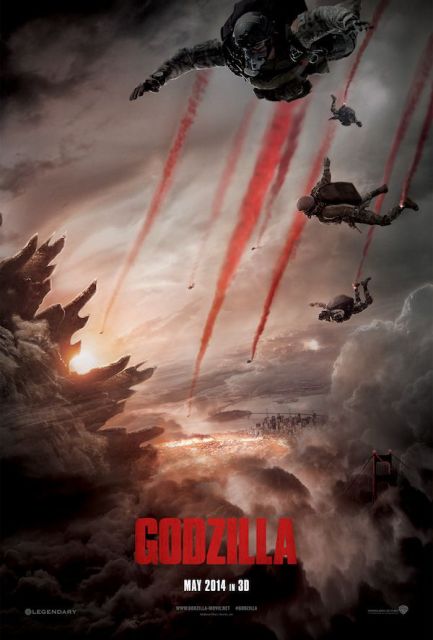 Nothing celebrates the Christmas spirit quite like a monster movie!

I figured it was about time to watch the most recent reboot of Japan’s favorite nemesis or protector, depending on whichever movie’s canon you’re watching.

Godzilla opens with Bryan Cranston’s nuclear engineer, having a rough day. After losing his wife in a nuclear power plant explosion, he becomes a recluse, chasing after conspiracy theories. When he discovers the Japanese government is behind the cover up, the movie starts getting interesting.

Getting his son involved in the drama, they make it a family affair. One of my biggest pet peeves of disaster movies of this millennium is the unnecessary need of weaving a family member in peril into the storyline. Just focus on the pure disaster, much like monster movies of old. Too bad those days of cinema have long expired.

However, I always enjoy these famous last words: “You know you’re only gonna be gone for a few days, right? It’s not the end of the world.”

Unfortunately, Cranston gets killed off way too early. I would’ve preferred the storyline to follow him, instead of his son, but I did like Ken Watanabe’s role as humanity’s moral conscience.

For some reason, massive unidentified terrestrial organisms (MUTOs) are wreaking havoc across the planet and Godzilla must restore balance in the ecosystem. Speaking of the overgrown lizard, it’s been publicized that there’s very few scenes with Godzilla in them and that’s too bad, since the paying audience wants to see titular monster.

This King of Monsters has no neck, almost looks like a turtle, peeking its head out of its shell and breathes blue fire. It’s definitely not your Grandfather’s Gojira. I don’t like this new design very much.

Massive destruction is on display, and that is EXACTLY what fans of disaster movies want to see, but it feels eerily similar to the not-so-satisfying Cloverfield, which also hid its titular character for the majority of the film.

Overall, this is a pretty good disaster flick, but only a decent Godzilla pic. And with a sequel already green-lighted, I wonder which Toho creatures get rebooted next? Mothra? Mechagodzilla? The possibilities are limitless. Bring ’em on, just give them more screen time!

Strength: Destruction! Monsters! Boom!
Weakness: Unnecessary family drama. Get on with the explosions!
WTF Moment: Why doesn’t Godzilla use his fire breath much sooner? Because then, the movie would only last for 30 minutes.

Notable Quotes:
– “This was not a natural disaster.”
– “You have no idea what’s coming.”
– “I guess we’re monster hunters, now.”
– “All I want to know from you is: Will it work and can they be killed?”