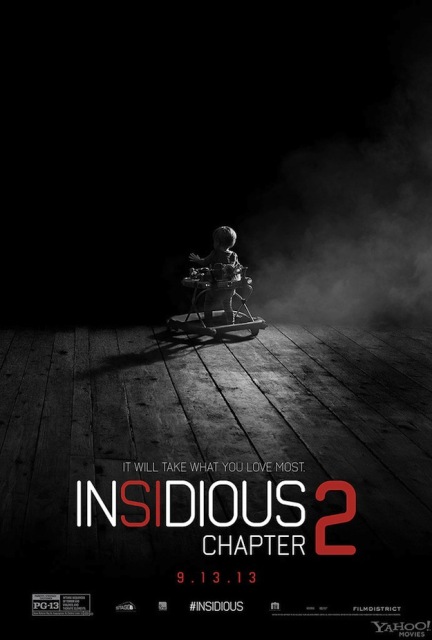 The madness behind the red door returns!

With Christmas cheer already out of our system, it’s time to get scared again. Insidious: Chapter 2 is our latest Redbox Rental.

After watching the original Insidious (and being concerned by its fuzzy-logic conclusion), I was unsure the direction for the sequel. Admittedly, the box-office success for Chapter 2 was the main reason for wanting to review this movie.

A flashback to 1986 sets up the chain of events for the original Insidious, also becoming the basis for Chapter 2. A young Josh Lambert is plagued by a parasitic dark entity that hopes to steal his childhood. Hoping to resolve the situation, the paranormal researchers suppress Josh’s memories.

Fast-forwarding through the events of the first movie, Josh (Patrick Wilson) is suspected of murdering Elise (Lin Shaye), the ghost hunter. More doors randomly open, items move on their own and the piano plays itself, signaling another entity’s presence. At first, Josh denies anything supernatural is happening, but his wife (Rose Byrne) and mother Lorraine (Barbara Hershey) — along with all the kids — know their imaginations aren’t going wild.

Seeking a resolution, Lorraine seeks answers from the original movie’s junior ghost hunters (Angus Sampson and Leigh Whannell). Together, they get involved with a convoluted subplot, dealing with a passed hospital patient that’s somehow involved with the family’s past. By the time they piece together a resolution, it may be too late to save the family!

The topics of death and living with a dead soul are briefly explored, before attempting to close the final paranormal chapter with the Lambert family, once and for all.

This sequel feels more grounded than the original movie. The practical special effects don’t wow, but definitely serve their purpose.

I will admit, I got a little lost in the details. The storyline feels like it’s from a Choose-Your-Own-Adventure book. Characters were going here, there and everywhere… sometimes making huge leaps of faith to propel the movie’s sequence of events. The conclusion reveals an interesting twist that not all bad things go bump in the night. I was pleasantly surprised.

With Leigh Whannell as a storyteller, the many plots of the movie feel like they’re coming out of left field, but somehow, they seem to wrap up nicely, making me want to rewatch both movies back to back.

There’s no denying the sure-fire moneymaker of The Further will return with yet another sequel and sure enough, Director James Wan sets up the conclusion of Chapter 2 nicely for yet another paranormal adventure. We’ll definitely be on-board for another visit to the darkness!

Strength: Great acting and scary moments throughout.
Weakness: The storyline is like peeling back the layers of an onion.
WTF Moment: One person’s past led to another, whose spirit inhabits someone else. Oftentimes confusing.