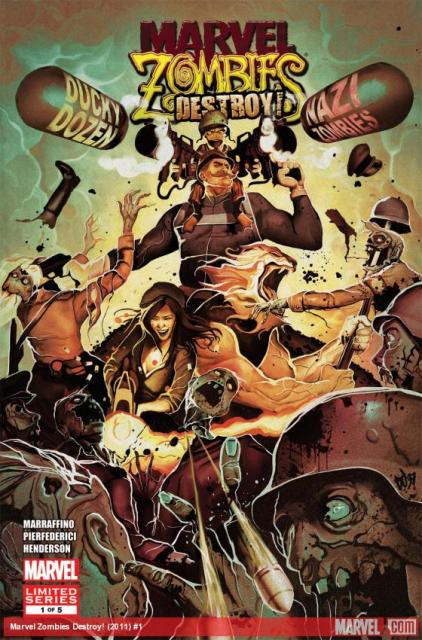 How can the Marvel Zombies Universe get any more bizarre? Incorporate Nazi Zombies into the storyline and see what happens!

As the graphic novel states: “Nazis. Zombie Nazis. The worst of two unquenchable hungers.” That’s pretty much a dead-on description of this story. Nazi Zombies may have been depicted in other stories, but this one is to die for.

In a parallel universe — on Earth-12591 — the Nazis won World War II by becoming undead, setting forth a chain of events that could threaten our own world (Earth-616). As a result, Howard the Duck has been called upon again (see Marvel Zombies 5) to recruit an elite team of superheroes for A.R.M.O.R. and bring and end to this potential menace.

Dum Dum Dugan, Battlestar and the Invaders get into the action for the good guys, fighting off the Nazi forces of Red Skull, Zombie versions of the Invaders and undead Asgardians… but somehow, Loki may be playing both sides against each other. This entire group of characters was originally created in the ’40s, so fighting off Nazi Zombies seems a natural fit for them.

Before the soldiers’ plan of attack can be made, the battle with the Zombies begins. So much fighting going on, I can barely tell what’s happening. In fact, the main characters are never fully introduced. They’re just killed off quickly and that’s a big problem. There’s far too few threads holding this razor-thin storyline together. This plagues Marvel Zombies Destroy! It’s not until the very end, when the reader finally deciphers what actually happens.

On the positive side, a new group of female superheroes reveal themselves: the Suffragists. I really enjoyed their personalities, their powers and their costumes. In fact, they present a great new inspiration to all the female cosplayers out there, tired of creating cross-gender heroes. I hope to see these ladies under the spotlight sometime soon at many conventions around the world.

Sadly, I feel the Marvel Zombies series may have already jumped the shark. I found the artistic style too simplistic, the storyline way too thin and hurried and it may sound cheesy, but there weren’t enough great one-liners for me. The past 10 Marvel Zombies storylines have included plenty of ha-ha moments to bring levity to a stressful situation. But not too many, this time around. Maybe a comedian should’ve been brought in, to add a few more chuckles sprinkled throughout the book.

There’s even a modern-day pop-culture reference thrown in for no true reason. What’s going on here?

In the end, like all sequels that have passed their prime, the writers have blatantly crafted an option to continue the storyline that would even make Indiana Jones shake his head in disdain.

I guess the undead story continues…

Notable Quotes:
– “Was that a Zombie squid?”
– “You ladies are a sight for sore everything.”
– “I am the most interesting brain in the world.”
– “Open the rear gate and we’ll come in hard and fast.”
– “Dames I know have more guts than a sausage factory!”
– “If there’s one thing I’ve learned, it’s that ya never give up on Dum Dum.”
– “Those pinheads at A.R.M.O.R. still letting a reject from Duckworld play soldier?”
– “Give me one good reason why I should listen to a stuffed duck in a stuffier suit.”