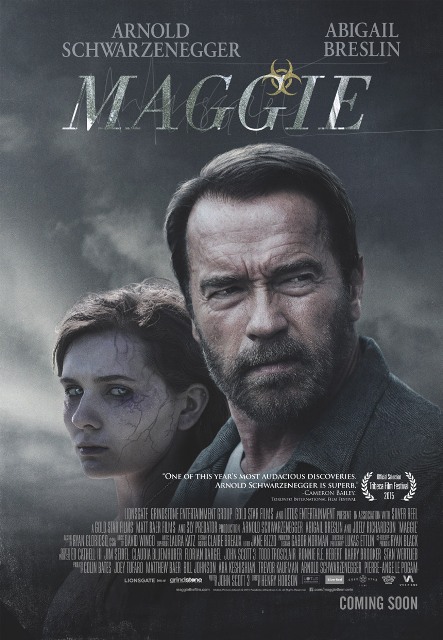 Maggie is a personal tale of loss that shows the lengths a father will go in order to protect his daughter, even if she’s slowly transitioning into the undead. While the story definitely features Zombies, the creatures are not the main focus here: It’s the complex father-daughter relationship that takes center stage.

The cause of the Zombie Apocalypse is never fully explored, but it can be pieced together throughout the movie’s 95-minute running time. Although health officials are only beginning to contain the Necroambulist virus, there is currently no known cure. Contaminated crops are burned by farmers in hopes of eliminating the outbreak and the disease is apparently spread by bites from the infected.

At some point, Maggie (played by Abigail Breslin) gets bitten and is quarantined at a local hospital. Her Father, Wade Vogel (Arnold Schwarzenegger), requests a favor from a family friend and is allowed to bring Maggie back to their country home, where she will attempt to spend her final days in comfort.

While the world is falling apart, Maggie seems to ignore her deteriorating body, trying to act normal. She’s brought back to “life” when her neighbors stumble over to the family’s property and must be taken down. She has a hard time showing any emotions other than being upset with the world… until she visits with her friends and her backstory is revealed. Flashbacks of her mother help her bond with her father during her end of days.

Maggie is mostly a thriller, with dramatic and psychological horror elements sprinkled into the script. It’s character driven — definitely not an action film. In fact, there’s only four Zombie deaths throughout the entire movie. This is a brand-new territory for Schwarzenegger: A low-budget movie where he’s not the main character. His grizzly look fits him perfectly here (hopefully he appears in more films with the beard). Previous reports have mentioned the actor was so fascinated with the script, that he didn’t accept a paycheck for his services. If he takes similar chances on smaller genre films like Maggie, Schwarzenegger’s status in Hollywood will surely catch fire.

There’s a quiet and unsettling kind of restlessness throughout the film, one that brings on lots of thundering, but no actual storms. That seems to be a fitting comparison for this movie. Maggie’s death is drawn out, but not a lot actually happens before then.

Strength: The Zombie Apocalypse, but from a different perspective.
Weakness: The movie’s more introspective than anything else.
WTF Moment: A freak swing-set accident leads Maggie to slice off her finger with a butcher knife.