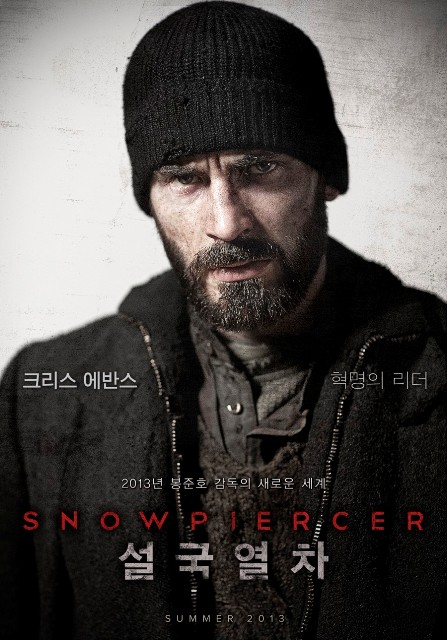 How far would you go, in order to survive?

In an effort to combat global warming, CW-7 is dispersed and virtually wipes out all of humanity. A new Ice Age has been created and the only survivors are the passengers of a self-sustained train with a closed ecosystem that continuously circumnavigates the planet. What’s that mean? No one ever leaves, but they get to live!

However, the Snowpiercer is not a complete Utopia. The train employs a brutal class system, where the poorest of the poor live in the squalor of the caboose and the upper class live in frivolity at the head of the train. The engine is sacred, where the owner and engineer, Wilford, lives.

Chris Evans is Curtis Everett, who looks and acts like nothing remotely resembling Captain America. Slimmed down and bearded, he sparks a revolution by moving to the front of the train, even though he claims he’s not a leader. Once their plan is initiated, the revolutionaries awaken and employ two addicts (one is a hacker, one a clairvoyant), who are compensated with fragments of kronole, an industrial waste that doubles as a hallucinogen.

As they fight their way through an endless number of cars, many obstacles (fighting soldiers equipped with night-vision goggles in the dark) and moral dilemmas (weighing the need to continue versus wiping out humanity’s last survivors) must be overcome. There are no easy choices when you are fighting for your freedom.

By the time the fighters emerge through the ridiculously unlikely greenhouse car, aquarium car, cattle car, swimming-pool car, rave car and drug den, a few impressive plot twists emerge. In an effort to avoid spoilers, there’s plenty of social commentary scattered about this science-fiction film, which is an adaptation of the French graphic novel, Le Transperceneige, by Jacques Lob, Benjamin Legrand and Jean-Marc Rochette.

The conclusion is divisive among some and leaves a lot up to interpretation of the viewer. Although the protagonist doesn’t quite get a proper send off, Snowpiercer‘s finale is enjoyable, all the same. Oftentimes, dystopian films are filled with political agendas, which I try to overlook, when watching a movie. This one completely holds the attention of the audience, as the fighters struggle for equality. It’s not often your interest in piqued from the start, all the way to the finish of a movie. That happened here and completely caught me off guard.

There’s lots of violence, plenty of tight shots with close ups, only a few subtitles and a few-too-many scenes with shaky cameras. Minor complaints involve a cool, futuristic translator (which was hard to hear) and an important backstory, that is mostly alluded to. Too bad more background information wasn’t given. Other than those, this is an incredibly focused and intense movie. One completely worthy of all the critics’ praise and Top 10 status placed upon it.

Notable Quotes:
– “Keep your place. Be a shoe.”
– “I know that babies taste best.”
– “Precisely 74 percent of you will die.”
– “There aren’t enough crazies on this train.”
– “The engine is sacred and Wilfred is divine.”
– “We control the engine; we control the world.”
– “We don’t have time for true natural selection.”
– “Cigarettes have been extinct for 10 years, now.”
– “When you dream too much of the sun, you forget the trees.”
– “What does steak taste like, again? I had it once, but I can’t remember.”