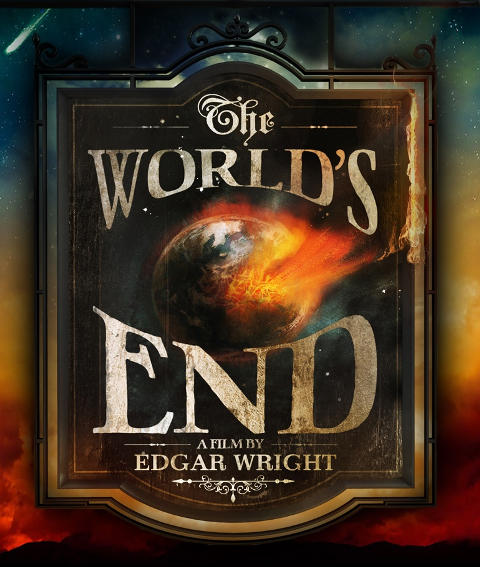 Per Matt:
Can you imagine a movie that combines an alien invasion with nonstop alcohol? I’d drink to that!

Something strange is definitely brewing in The World’s End, a movie brought to you by the same group who created Shaun of the Dead and Hot Fuzz.

Five childhood friends are reunited when Gary King (Simon Pegg) — hoping to relive past glory days — brings five childhood friends together for the first time in years, in an attempt to master The Glorious Golden Mile: a pub crawl consisting of Newton Haven’s 12 historic ale houses… all back to back!

That’s five guys, 12 pubs, 60 pints and some unfinished business. What on Earth could possibly go wrong? Everything!

Initially, the group is hesitant to band together for the pub crawl, because each one is forced to relive a past event that’s haunted each one of them for years. Somewhere along the line, King — the fast-talking fortysomething who never grew up — inadvertently uncovers a group of otherworldly visitors in a drunken bathroom battle royal who practically rip-off the plot from Invasion of the Body Snatchers.

Once the gang figures out what’s going on, they’d rather finish the mythical pub crawl, so as not to arouse the suspicious watchers all around them, instead of fleeing for their lives.

The World’s End includes a deluge of fight choreography and apparently a huge FX budget, as well as a TON of foul language (as expected during a mega drinking session). The gang fights and fusses over girls and everything else. The alien collective refers to themselves as The Network, who don’t make an appearance until the final third of the movie. That’s when the gang jumps in to really get ink on their hands!

Surprisingly, I really enjoyed this film, even though I never much cared for Shaun of the Dead or Hot Fuzz. Please forgive me, but the dry humor of English comedy isn’t typically my favorite genre. Regardless, this is one fun flick.

Strength: A buddy film that includes alcohol and aliens. Huzzah!
Weakness: Simon Pegg is no action hero. He just looks old and tired.
WTF Moment: Not one, but two former stars from the James Bond series make appearances!