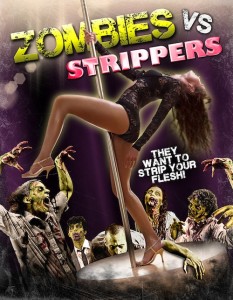 As weird as it may sound, I’ve wanted to watch this movie for a long time!

I had no idea it even existed before a few months ago, when my brother attended ScareFest. According to him, the movie was screened at the convention; however, I missed it. I did luck out, since only one copy of the movie could be found within a 15 Redbox radius. No joke. My house is literally surrounded by the Redbox Army. I surrender… but only for free movie rentals! Mission Accomplished.

As hard as possible, I’ll try to keep this review spic-and-span clean. There is partial nudity, which is almost to be expected when dealing with strippers, but this is the first time I’ve experienced it from a Redbox rental. 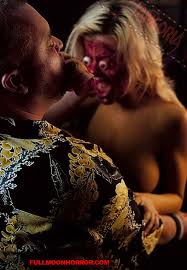 This movie offers a sound theory: Strippers have waged an unholy war versus zombies, ever since the dawn of time. Outside forces have turned the population of Los Angeles into hordes of the undead. It is unclear why, but the stereotypical Bible thumper claims the Maker has waged revenge against sinners. Of course, this is preaching to the choir, at a seedy strip-club lounge.

Well, it’s tough times down at The Tough Tittie. Just when the strip club owner decides to sell out, people start rioting in the streets. I mean, where else would you rather be, during the zombie apocalypse? A strip club seems pretty reasonable. Plenty of alcohol, some food, some water. Lots of ladies. And usually decent security. But not here! The undead wander through the doors with ease, and almost instantly, all the males are killed off. It’s up to the strippers to save the day! Fighting zombies is bad enough, but it’s even worse when one of the zombes is a Michael Jackson impersonator!

The overacting from the zombie hordes is ridiculous. And THEN there’s the strippers. But if you’re watching a B-Movie of Pornography, what do you expect? There’s definitely no Robert Kirkman material here. Keep that zombie horde moving right along.

Notable Quotes:
– “People are so hungry, they’re eating each other out here.”
– “I’m gonna drink this Tittie dry.”
– “There are no cops. There are no police, sir. Only demons, roaming the streets, hungry for the flesh of sinners. And your obnoxious music is attracting them from every crevice, crack and crannie in this, here, city.”
– “We shall all be walking dead by sunrise.”
– “See you in Gangster’s Paradise, baby.”