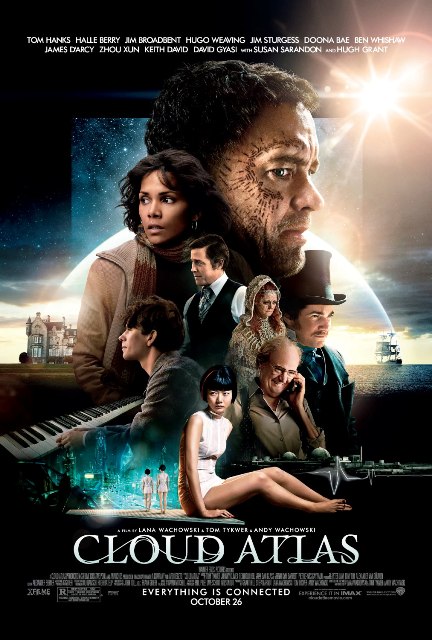 Cloud Atlas is the latest motion picture by The Wachowskis. Will it be more stunning headgames like The Matrix? Or perhaps more of a letdown, like Speed Racer?

Cloud Atlas is a movie like no other. It attempts to span not one timeline, but many timelines, taking place in Pacific Islands (1849), Cambridge (1936), San Francisco (1973), London (2012), Neo Seoul (2144), and Big Isle (106 Winters After the Fall). Not only does it take place in different locations of different timelines, but each of the main actors play different characters, as well.

I spent the majority of the time attempting to figure out which actor was underneath each disguise, with Hanks and Berry both portraying seven different characters.

For a movie that’s almost three hours long, it me about two-and-a-half hours to eventually figure out what the heck was going on. For the majority of the time, the indecipherable storyline offers a seemingly senseless narration, to lead you along.

Throughout it all, Cloud Atlas attempts to enclose multiple genres. It’s possibly the best Neo Noir-mystery, as well as the worst storytelling imaginable. In fact, at one point, a self-referencing book editor references disliking flashbacks and flashforwards as a storytelling device, but to bear with it and eventually it’ll pay off in the end. I suppose he was partially correct. Suffering to the end, I am somewhat interested in watching the whole movie again in order to digest all that I’ve missed… at some point.

During one timeline, Tom Hanks’ primary role is that of a simple sheep-herder and Halle Berry is an other-worldly visitor hoping to save her dying race. In another, a musical muse reignites a fading composer’s creativity in hopes of reaching nirvana throughout the years. And another involves a nuclear power plant murder and cover-up unveiled by an investigative reporter. But the best of the bunch involves Doona Bae’s storyline, which is the least muddled of the bunch, although still vague. She plays a rebellious clone in a futuristic Korea seeking truth and justice and is the glue holding the entire movie together. Her’s is the most emotional.

The symphonic and orchestral music practically plays a main character throughout the entire movie, as well. It’s not over-the-top or unbearable, but consistently builds to a crescendo of brilliance, leading to the film’s climax. Everyone involved with the Music Department ultimately outdid themselves.

There’s plenty of high-tech graphics and technology scattered about the past, present and future of the movie. It’s obvious Cloud Atlas is a futuristic, high-concept film based on dense source material. I wanted so badly to enjoy the movie, but so many bizarre elements (including vocabulary that was practically unintelligible) made it difficult to fully comprehend the movie with one viewing and having known no previous background information. Cloud Atlas has some great actors and intriguing storylines, but I was mostly unable to determine what was happening onscreen until the bitter end.

Even if “Everything is Connected,” sometimes less is more.

Strength: Superb acting and visual effects.
Weakness: Storytelling takes a while to get used to… way too long.
WTF Moment: “It will end in tears,” the Narrator warned. Surely, he was warning the filmmakers of Cloud Atlas’ box-office prospects.

Notable Quotes:
– “Love could outlive death.”
– “Our survival demands our courage.”
– “Truth is singular. It’s versions of mistrust.”
– “Did you ever think the universe was against you?”
– “I will guide you through the Devil’s Door, if you want to go.”
– “This world spins from the same unseen forces that twist our hearts.”
– “Our lives are not our own. From womb to tomb, we are bound to others.”
– “The dead never stay dead. Open your ears and they never stop a yipperin.”
– “What is a critic, but one who reads quickly, arrogantly and never wisely?”
– “The first rule of mystery writing: A good clue always leads to another clue.”