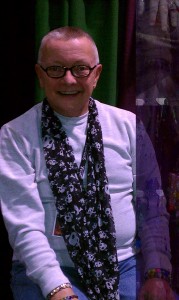 Per My Brother:
When I was making preparations to visit ScareFest, I had instant name recognition with Chip Coffey. He was the psychc from the TV shows Paranormal State and Pyschic Kids and I instantly made it a mission to visit his table in the dealer and autograph room. However, he had one of the longest-lasting lines throughout the entire weekend, so it was tough tying him down for an interview. I did have some ulterior motives: Recently, I’ve had multiple paranormal expierences and I was hoping to get some information. With some luck, I was able to speak to him a few times, attend his panel and get a quick, mini-interview during a brief lull in the passersby. However, he did not allow photographs or audio recordings during his panel. So, I frantically tried to keep pace by taking notes during the panel. In addition, I have inserted the questions of my mini-interview as well.

Chip Coffey divided his panel session into two parts: a Q & A session and a gallery reading. This was the fifth year for Coffey to attend ScareFest and this is his favorite convention to attend. Patti Starr is his friend and reference for attending the show. Coffey worked on 31 episodes of Paranormal State and three seasons of Psychic Kids. He was quite proud to have dropped the F-bomb on international television 24 times. Sounds like a record. He is now working on a new show. This one, a podcast, broadcast each first Monday of the month on LiveParanormal.com. He is also working on a new TV series, one with a different take on the paranormal.

How can you tell if you’re sensitive or psychic?
– “Everyone is psychic. Some people are very psychic, some are little, some are psychic as a rock, not realizing it. If a psychic tells you something, hold onto it a bit. If you can validate it, you’re psychic.”

What is the paranormal?
– “I can’t understand or explain the paranormal. I don’t know what’s going on. I’m a healthy skeptic. I need experience and evidence.”

What are your earliest paranormal memories? When did you realize you’re a medium?
– “I’ve always been psychic. I started with the simple things: pre-cog stuff, like looking at the telephone before it rings. I started talking to dead people in my 40’s… it was a dead co-worker. I validated it, realized I’m psychic. I wanted my Mom, who finally showed.”

Do you ever get scared, talking to the dead?
– “I’ve controlled my filters and barriers. I don’t get afraid, I feel protected. If something takes me out, I’ll go out fighting. And on the other side, I’m still gonna be fighting.”

What is the difference between religion and faith?
– “I’m not here trying to convince or convert people. To me, religion is more demonic and faith is more personal.”

Is there a way to develop psychic ways more?
– “Pay more attention. Be receptive. Ask your spirit guide for help.”

Can you speak to dead animals?
– “I do not think my strongest suit is animal communication, but I talk to my dogs all the time. I do believe all dogs go to Heaven.”

Is it possible to talk to the dead while sleeping?
– “Sleep is the closest we come in life, to death. Loved ones or spirits find it easier to visit us during that time.”

Are children more receptive?
– “We get so tied to technology, we’re focused to the real world, not open to receive (signals). Children have open imaginations: good and bad. Little babies don’t see spirits. Let the kid be a kid. (Don’t force them into anything.)”

Do spirits get angry, since you’re shutting them off?
– “Most spirits are nice guys. I don’t usually get bad guys. Spirits stay the same as in real life. If they’re a jerk then, they’re a jerk now.”

Have you encountered people you can’t read?
– “People who’ve created walls and don’t want to be read, prevent it in the fourth dimension.”

What types of things do spirits talk aobut?
– “Spirits bring up the most mundane things from beyond the grave.”

Do you physically see spirits when talking to the dead? Or do you only sense their presence?
– “Most of the time I don’t see an apparition. Sometimes I do, but most often I just sense the energy of a ghost or a spirit that is present in the environment that I’m occupying.”

People recognize you as a psychic from TV. Isn’t is easy to read people without them knowing it?
– “I don’t ever try to determine or psychically read anyone without their permission. So, it’s very unusual that I would pick up anything about someone that I would just meet on the street, unless I tune in and focus on that individual. And I would never tell them anything that I picked up without getting permission because that’s like violating their personal psychic space. And I would never want anyone to do that to me. So, I won’t do that with anyone else.”

Have you ever spoken to a person, then later have their spirit contact you, as if they had an accident and died?
– “I can’t think of an instance where I’ve ever picked up on one thing. But I can tell you an instance at the Atlanta airport once, and totally unbidden when a guy, who was in the military, and recognized me, and shook my hand. I felt like his life was in jeopardy. And it troubled me. And the entire weekend I called in my guides and angels to please bring protection around him and his protective angels to help him. It was all I could do. I didn’t know what happened to him.”

You spoke of your spiritual guide. How did you come to realize what your spiritual guide was?
– “I have anywhere between seven and 10 spirit energies that I work with. When I first met the original seven, one of the dogs that I had in my life — and I’ve always had dogs in my life — had just died tragically and a friend of mine who is very spiritual said, “Come on, let’s go to the park. I want to introduce you to your guides. And that afternoon, I went on a guided meditation and met them and at the middle of this crushing grief, is a beautiful experience of having this spiritual enlightenment. So, something tragic was turned into an amazing day in my life.”

Do you think your spiritual guides are reincarnated friends you’ve met in the past?
– “I have no idea.”

Do they have names?
– “Yes. Nobody that I know. Not in this lifetime.”

You briefly mentioned knowing actress Pauley Perrette of the TV show NCIS. Are you close friends with her?
– “She’s my precious, precious, wonderful friend.”

Is she ever going to work you into one of the NCIS episodes one day?
– “I hope so. We’re working on it. If she can get the writers to do it… Hopefully. I don’t know if it’ll ever happen, but she said, if she could help make it happen, she would. And I love her. She’s amazing.”

Besides ScareFest, what other conventions will you be doing in the near future?
– “My Coffey Talk Tour kicks off in a couple of weeks. If you go to my website, ChipCoffey.com on the Events Page, you’ll see all my planned events listed.”