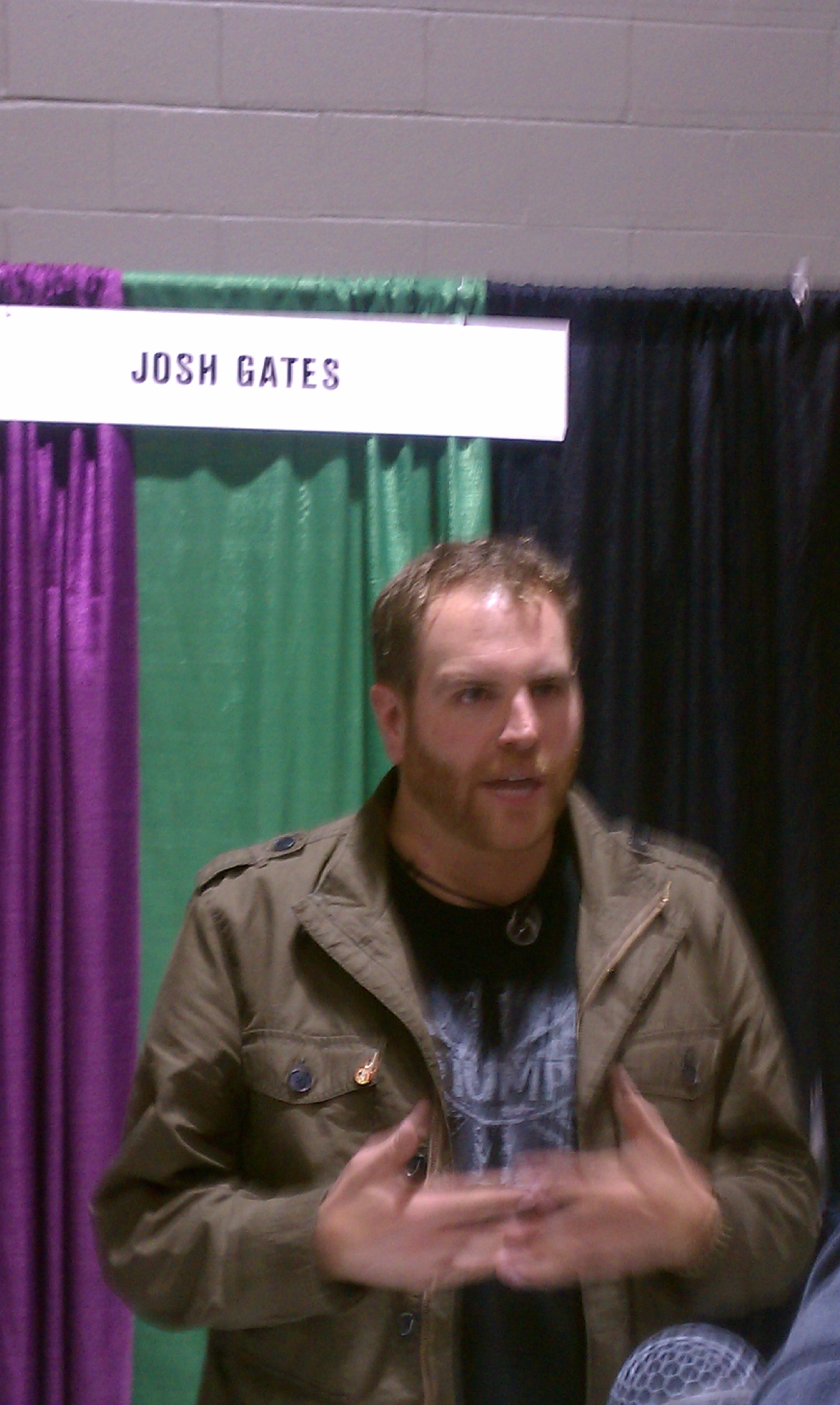 Per Matt:
I had a great time at ScareFest 2012, and I really enjoyed attending the panel of Josh Gates, host of Syfy’s Destination Truth and Ghost Hunters Live. He was a busy, busy man throughout the entire weekend, practically unreachable by his endless line in the dealer and autograph room, but just before he packed his bags and departed Lexington, I tracked him down for a mini interview.

And Breaking News Folks: He’s just as charming in person, as he is in his panel and on TV. I truly believe he enjoys what he does (on camera and off) and interacting with his fans. That kind of personality should make him very successful for a very long time, traveling or not.

You had mentioned in your panel that you’re a big fan of traveling internationally. Have you ever considered taking Destination Truth on the road, closer to home, within the United States?
– “We’ve done a few episodes of Destination Truth within the states, but only a few. I think the channel really likes the show overseas. There’s a sort of exotic flavor to the show and they want to maintain it. That’s why we haven’t done too many episodes in the US.

Have you considered doing a spin-off TV show, mainly focusing on stories within the United States?
There are TONS of great stories in the United States, both crypto stories and paranormal stories. In the future, whether it’s with Destination Truth or with something else, I’d like to be able to come back home and be able do more investigations here.

I enjoy all your adventures on Destination Truth, but the ones where you don’t find any evidence whatsoever I enjoy the most.
– “To me, it’s a travel show. Or it’s a hybrid between an investigation show and a travel show. We think it’s just as important to show all the bumpy roads and flat tires and bad food, all the things that go into getting to these places. We hope that, at the end of every episode, whether we throw a net over Bigfoot or not, people come away being satisfied by having taken a trip. An adventure. I think, for us, the mark of a successful episode isn’t necessarily ‘Did we bring back rock-solid evidence,’ but is ‘Did we tell a solid story? Did we get people interested in something they didn’t know about before?’ You know, you’re not going to be able to solve all these stories in a couple of nights. So, we’re really just trying to get people out on an adventure, and trying to set up the best investigation that we can, in the time that we have.”

With Jael working on Fact or Faked, do you consider it a Destination Truth spin-off?
– “I don’t consider it a spin-off. It’s a very unique show. What’s great about Fact or Faked is that they have this terrific tentpole of a show, trying to recreate these interesting videos. I think that makes the show, obviously, stand alone.

There seems to be a little turnover with Destination Truth crew members coming and going, throughout the seasons. Have you considered having a reunion-type episode, combining all current and past people who’ve worked with the show?
– “We would love to do that. The great thing about (having Jael on Fact or Faked) is that we’re all in the Syfy Family. I talk to Jael. I talk to Ben Hansen. We’re all friends. I’ve made a few appearances on Fact or Faked this year. We all kind of hop around, from show to show. That might actually happen. I would love to do a reunion show down the road. Get the whole band back together.”

Do you have any episodes already “in the can” for next season?
– “So, we filmed the first half of season five, and those episodes have all aired now. Now, we’re just in the conversation phase, of trying to figure out what we’re gonna do now. It’ll be a little while before the show comes back again. I know that’s sort of frustrating for the fans… a lot of gaps between the episodes airing, but it’s sort of how the cookie crumbles with Destination Truth. But we will certainly let you know when we’re back into the world.”

What are the next conventions you’ll be attending?
– “I’m gonna be at New York Comic-Con very briefly, and then hopefully a few things the rest of the year. You can go to JoshuaGates.com and see all the updated appearances.”