Scary Christmas Everyone! A Review of Krampus 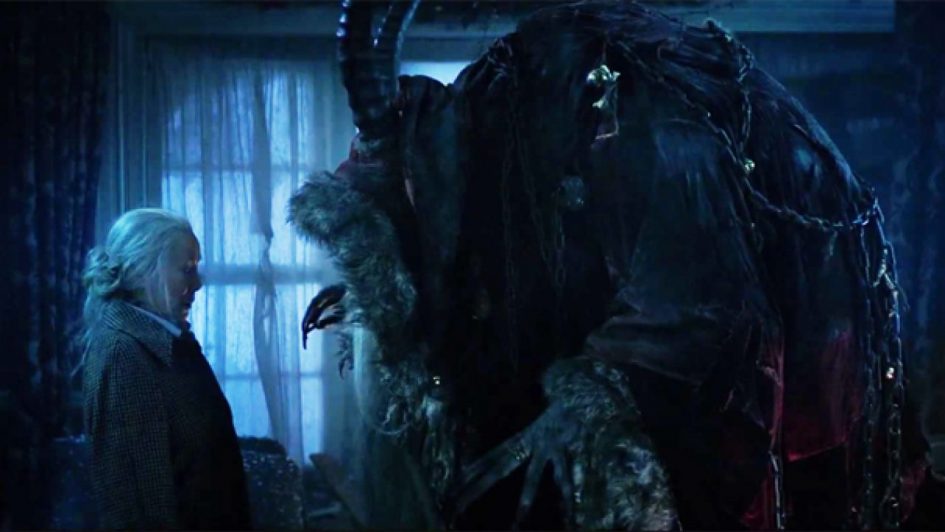 Welcome back to another fun-filled episode of #hauntlife. This time around, I am going to be reviewing the 2015 film, Krampus, starring Adam Scott, Toni Collette, Emjay Anthony and Dave Koechner.

Christmas would have to be my second favorite holiday behind Halloween. There’s just something magical about it. The lights. The smells. The food. The colors (yes… even for a colorblind man like myself, I still see some color). The season seems to bring out the best in most people. There is a sense of love and compassion in the air that renews my faith in humanity, as a whole. What a great way to end the year and get ready to start new.

However, there is still an air of creepiness that comes with it. And when I say creepy, I really am talking about Santa Claus. You know… the jolly, old elf who journeys around the world to bring presents and good cheer to all good little girls and boys. That guy gives me the heebie jeebies.

I mean, let’s think about it. He has been keeping track of everything you do all year long, then arbitrarily determines who is good or bad. He knows when you go to sleep. He knows when you get up. Then, one night a year, he gets into his sleigh, flies to your house and breaks in. To appease him, you have to leave cookies out and pray to the gods that he forgives you. And as a reward, he leaves you presents. But what if he deems you bad? What else does “good ole Saint Nick” do in your house? Does he try on your clothes? Does he smell your underwear? Does he stand in the corner of your room like Boo Radley and watch you sleep? And people, this Halloween is creepy. At least with ghouls and monsters, you know what you are going to get.

And then there is Krampus. According to Wikipedia, Krampus is a horned, anthropomorphic folklore figure described as “half goat, half demon,” who during the Christmas season punished children who have misbehaved. He is kinda like the total opposite of Santa. In some countries, on December 5th they celebrate Krampusnacht (Krampus night). People dress up in elaborate Krampus-inspired costumes and take to the streets, visiting home and business, looking for bad people to give them coal or spanking them with Krampus ruten (a bundle of birch twigs fastened together with twine). Sounds like my kinda folklore!

For years, I have loved the idea of Krampus as a fixture in the haunted houses I have worked in. The first time we got to do it was at Monster Mountain one year. We had just bought a snow machine and were looking for a way to use it. The idea of doing a serial killer Santa came to mind, of course. But to me, it had been played out. We needed something new and refreshing. That was when someone mentioned to me the Krampus character. I started doing so research on it and thought, “WOW! This is exactly what I was looking for!” So, that year, we ordered a Krampus mask, satyr leggings and hoofed boots to create the character. All in all, i think it turned out great. 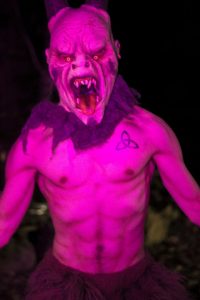 I heard that Universal was releasing a Krampus film last year, but never got a chance to see it. With all the things I do, it was near impossible to find any free time. And with a 2-year-old running around, if it ain’t Frozen, Megamind or any Pixar film, the likelihood that I could get to see it at home on the big screen is just about zero. But this year, Nashville Nightmare is doing a Krampus-themed haunt on December 16th and 17th, and it draws heavily from this film. So, I had to check it out.

The film centers around a family dealing with the typical woes of Christmas: angry shoppers, screaming kids and annoying relatives. Tom and his wife, Sarah, are trying to maintain the best Christmas they can for their two kids, Max and Beth. Max very much wants the family to follow the traditional activities that they do, but it started to become apparent to him that tensions in the house are on the rise as his relatives come to visit and bring their own issues to his already stressed-out family. In a fit of anger, Max tears up a letter he had written for Santa and threw it out the window. Shortly after, a massive blizzard begins, cutting power and leaving the family stranded.

As the family struggles to stay warm and happy, mysterious events begin to take place. Mysterious presents arrive. Beth, who had ventured out into the storm to find her boyfriend, has come up missing. And soon the family is attacked by Christmas creatures, like a demonic jack in the box, elves, dolls and even three gingerbread men. Finally, Krampus arrives and the final struggle to survive begins.

I give this films a solid 5/5. The storyline made sense to me. While there were some small loopholes, on a whole, it told the story as I imagined it. The acting was what you should expect from a major Hollywood production and the special effects where pretty good, too. I’ve got to say I was pleasantly surprised, though the major studio stayed pretty true to the folklore. It’s definitely now on my must-see Christmas movie list.

If you happen to be in the Nashville area on December 16 or 17, be sure to check out Nashville Nightmare’s Krampus: A Haunted Christmas. And be sure to stop by and say, “Hi.” I should be there doing something.