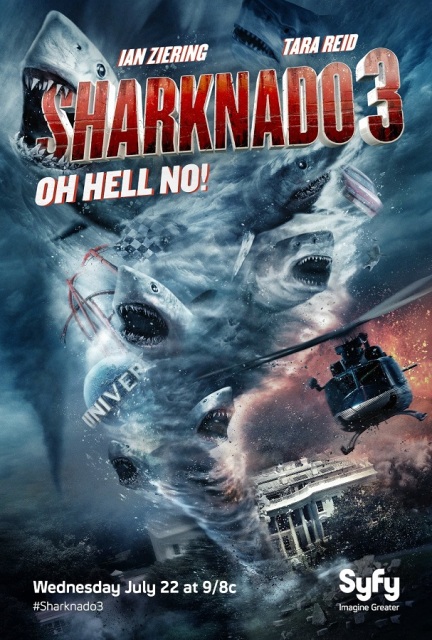 “This day is such a disaster.”

It was bound to happen: Yet another mash-up! The entire Sharknado franchise has been a silly concept from the get-go: Combine a tornado with sharks and you’ve got a can’t-miss disaster flick. Well, that was the concept The Asylum and Syfy hoped to create, anyway. Sharknado 3: Oh Hell No is the result of a successful pop-culture awareness campaign promoting the previous movie.

Part 3 follows the same script: Somehow, Fin Shepard (dutifully portrayed by Ian Ziering) always happens to be in the wrong place at the right time, followed by different weather anomalies. Sharknados, fognados and even sharkicanes make special appearances throughout the film. Although unsure how they form, Fin can now somehow predict future Sharknados by smelling them before they arrive (I wish I was making this up). It seems only fitting that Thunder Levin wrote the screenplay that involves multiple storms.

Once more, Fin attempts to save his family’s life from the flying predators. Returning for this sequel are his recently reunited wife (Tara Reid) and former employee (Cassie Scerbo), who believes these storms will lead to the end of the world. They form a dysfunctional family, that’s for sure, but together, they hope to save the world. So many celebrities (of varying degrees) make appearances, including David Hasselhoff, Mark Cuban, Frankie Munitz, Ne-Yo, Jerry Springer, Kendra Wilkinson, Holly Madison, Penn, Teller, Bo Derek, Michelle Beadle, Chris Jericho, Ann Coulter and more! There’s definitely more than a few built-in jokes for that group, alone.

There’s lots of overacting, very little storyline and weak special effects, but the movie offers viewers a chance to check your brain and enjoy the never-ending bloody destruction. Hoping to create even more awareness, the movie ends with a slight cliffhanger. Viewers are asked to Tweet the fate (#AprilLives or #AprilDies) of one of the main characters for the next sequel, Sharknado 4.

Let the audience win: For the next movie, humanity must terraform another planet after the sharks devour the entire planet’s population!